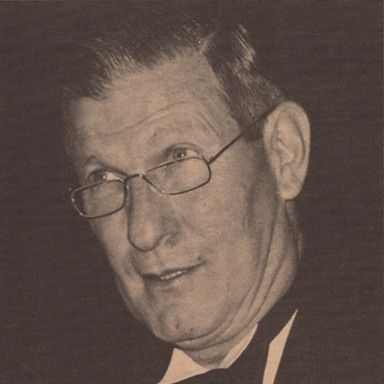 When one walks up the steep staircase leading into Horns command center, he is greeted by a constant barrage of activity. Aides armed with reels and storyboards move like whirling dervishes, as if part of a well-choreographed ballet. In the middle of all the excitement stands Steve Horn, the Great Communicator, whose consistently high production values are matched only by the fashionable clothes he wears.

Born in Brooklyn in 1932, Steve Horn attended Manhattan's High School of Music & Art. After graduating, the Brooklyn Dodgers offered him a pitching contract. Steve's father, a pharmacist, refused to let him sign. As a result, he went to Pratt Institute on an art scholarship, majoring in advertising. In 1953, Horn went to Columbia University to further his education. He subsequently received a B.A. in Fine Arts and an M.A. in 13th and 14th Century Italian Painting.

Armed with his degrees, Steve Horn landed his first job as an assistant art director with theReba SochisStudio. He then went on to take Hal Davis's place at Robert Brandau's Studio. While there, he began dabbling in photography.

In 1957, freelance designer John Berg invited Steve Horn and another graphic designer, Norm Griner, to his engagement party. A friendship was struck and two years later, they formed Horn/Griner, a partnership that lasted fifteen years.

In the beginning, Horn/Griner was strictly a graphic design firm; shooting an occasional photo for a client's ad or record jacket. John Berg, just beginning his long association with Columbia Records, supplied them with most of their design assignments.

It wasn't until 1961 that Steve Horn's rather uneventful design career changed instantly with the click of a Hasselblad. Steve shot a double-page spread for I. Miller ladies shoes. The moment it hit the newsstands inVogue, Steve Horn began his career as a professional photographer. The ad propelled him into the glamorous world of high-fashion photography. Consisting of atrompe-l'ilpainting along with 'live' props, the I. Miller ad was a perfect springboard for Horn's growing expertise as a photographer.

The late fifties and early sixties erupted with slick, chic photography. Besides Horn, some of its major contributors wereRichard Avedonand Irving Penn. Both still remain Horn's heroes. Steve began refining a tasteful, technically-sound style of his own, which spills over into his television work of today.

During this time, Steve Horn developed the Hasselblad camera with the Polaroid back. Its discovery came out of his search for total technical control over a photo session. This innovation, now basic equipment in virtually every studio, enables the photographer to immediately check lighting, prop placement and shot composition, avoiding second-guessing and costly re-shoots.

From 1962 to 1964, Steve made several extended trips to Europe on assignment forElleand various other high-fashion magazines. While there, Horn noticed an increasing number of photographers using a wide-angle twenty-millimeter lens. Realizing its great visual potential in haute-couture photography, Steve became the first still cameraman to bring this trend to the United States. His work subsequently received rave reviews.

Throughout this period, Horn/Griner became the most sought-after tandem in the business. Their distinct styles and personalities did, however, present some problems. Steve relates a humorous story:

"It was during a Yuban Coffee shootNorm and I, without regard for each other, would switch props and change lights while the other looked through the camera's viewfinder. From that moment on, we knew we couldn't work together on the same projects."

In 1967, Steve Horn began another segment of his career that would eventually blossom into the most prolific in the business. The late television art director Georg Olden recognized Horn's talent and potential as a commercial director. Consequently, Horn made his directorial debut on an Encyclopedia Britannica spot. Steve remembers being awed by the sudden shift from Hasselblad to hand-held Arriflex. His proficiency in still work, no doubt, made for a smooth and natural transition.

In addition to directing, Steve Horn also takes great pride in being his own cameraman and lighting director. Very few directors (if any), can effectively do the work of two key crew members. Steve, however, consistently rises to the task. His uncompromising dedication to high production values keeps him in constant demand over 200 days a year. Steve's list of satisfied agencies and clients reads like a who's who in advertising. Horn's versatility in shooting all types of challenging spots, starring sports figures, celebrities, fashion models and ordinary people is unequaled in the business.

Whether he's shooting the Joffrey Ballet for IBM, staging an Eddie Rabbitt concert with a cast of thousands for Miller Lite or taking over an entire town in Texas for a Bi-Centennial Coke spot, Steve has become the most dynamic force in television commercials. He usually shoots very early in the morning or late in the afternoon (the "Golden Hour") in order to produce his distinct, soft and diffused chiaroscuro lighting.

One of Steve's greatest technical triumphs is the "Through-The-Lens-VTR System, allowing clients to view the action exactly as the director sees it. It works by means of a complex network of ground-glass mirrors. In addition, the images captured on film are also recorded on tape, permitting simultaneous playback of questionable scenes. Today, this unique system is standard throughout the film and medical professions.

In 1974, Horn and Griner went their separate ways. Norm collaborated with director Mike Cuesta and Steve embarked on a partnership with his second wife Linda, forming Steve Horn, Inc.

Steve's flexibility in adapting to and starting new trends keeps him at the forefront of an ever-changing profession. It can never be said that Steve Horn is a typecast director. His style doesn't permit directorial pigeon-holing. Steve successfully crosses all genres. His work has earned him innumerable Clios, Gold Lions and Art Directors Cubes. Horn has the distinction of shooting more spots than any other commercial directorat last count, somewhere over 20,001. In 1985, Advertising Age named him "Television Commercial Director of the Year." Steve's incredible knack for adding his own dash of visual creativity to a client's board always enhances the finished product. Each spot inherently becomes a miniature thirty or sixty second work of art.

Over the years, Steve Horn has been an inspiration to many agency art directors and producersmost notably,Bob Giraldi,Rick Levineand Michael Ulick. They all made the switch to commercial directing, undoubtedly catching some of Steve's contagious brand of enthusiasm.

From his timeless Barney's spot to his latest, most daring commercial for Diet Pepsi, Steve Horn always has the power to elicit a positive and memorable response from the usually skeptical consumer. His tireless quest for perfection is the only way he knows how to work. It's no wonder agencies keep calling him.

Every year, Steve sets aside time to shoot public service spots. Not just a firm believer in the causes he chooses to represent, Horn also finds them wonderful outlets to create and experiment with. His 1972 handheld spot for theMayor's Narcotics Control Commissionfeaturing a gritty,cinema-vritstyle, is a classic. Other stellar examples include work for theUrban Coalitionand theKidney Foundation.

Today, Steve Horn Inc. is a thriving, full-service production company. In addition to her duties as executive producer, Steve's wife Linda also runs a prosperous antique business. Steve still does an occasional print ad. He's been photographing Benson & Hedges and Virginia Slims ads from the beginning. His "Top Gun" spot for Diet Pepsi has the honor of being the first commercial ever used in all home videocassette copies of the movie bearing the same name. The little leisure time he has is spent playing tennis or restoring houses with his wife.

To list all the spots Steve Horn has shot in his legendary career is indeed an exercise in futility. Through his work, Steve always manages to entertain and delight millions of people. What's Steve Horn doing right now? Chances are he's adjusting lights, creating a new piece of equipment, getting coffee and danish for his appreciative crew or preparing for his next shoot.