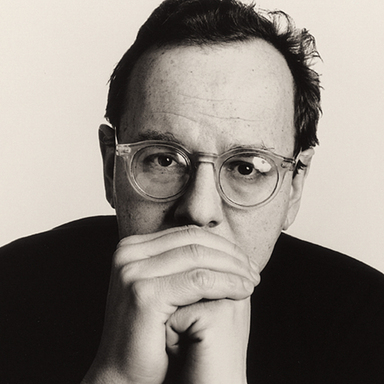 Tibor Kalmans impact could not have been foreseen when he opened M&Co out of his Greenwich Village apartment on the proverbial kitchen table in 1979. Kalman entered the profession through happenstance, bringing with him none of the prejudices of design school training, and little of the expertise. He had a belief that graphic design could provide a stage for his broader concerns. Fusing modernist social responsibility and post-modernist introspection, M&Co developed not only a style but also an ethic that raised the bar of graphic design thinking and practice.

Yet Kalman was a perplexing combination of business entrepreneur, media maven, social activist, and professional outsider. Born in 1949 in Budapest, Hungary, Kalman was the oldest of two sons. When he was seven, the Soviets poised for the invasion of Hungary and his family fled to AmericaPoughkeepsie, New York to be exact.

In 1967 he enrolled at New York University, where he began working on the newspaper and became a member of Students for a Democratic Society, the radical organization that orchestrated campus shutdowns to protest the Vietnam War. He dropped out of NYU in 1970 and illicitly traveled to Cuba as a member of the Venceremos Brigade to cut sugar cane and learn about Cuban culture.

Returning to New York in 1971, he was hired by Leonard Riggio as creative director of the Student Book Exchange where he had worked while at NYU. Riggio was running 20 college bookstores and had bought a small business called Barnes & Noble. Kalmans store became the flagship of the empire.

Kalman taught himself to design advertisements, store signs, shopping bags, and the original B&N bookplate trademark. For the next eight years he directed the advertising and display of what had grown from one to fifty-five outlets. In 1979 Kalman accepted a high-paying offer to design signs for a discount department store chain, and soon after left to open his own graphic design studio.

His wife Maira had the nickname M, and he called his concern M&Co. Bolstered by an influx of work, Kalmans sense of the funky and absurd began to kick in. He built a goofy-looking office, with a goofy, triangular-shaped table that fit into a goofy-shaped conference room. In the post-modern manner, the office was very dressed up, yet the reception window was a hole smashed out of the wall with a sledgehammer. You could bring a bank client or a rock group there for a meeting, Kalman explained. It sort of cut both ways.

By 1989, Kalman had transformed M&Cos promotions into a soapbox for arguing the efficacy of social responsibility. We went along a piece at a time, each time trying to figure out how to make a political childrens toy or how to introduce politics into our products, identity work, corporate work, and music work.

Kalman took his mission on the road. He argued in lectures, writing, and through satiric visual essays of the waste involved in most corporate identity systems and the hypocrisy and obfuscation in design for bad companies. Kalman put forward a distinctly modernist notion that good design for good causes can improve the environment. Otherwise, he argued, what is the point of being a designer?

His promotional investments paid off. M&Co, the entity, became a drain on Kalmans energy when it became an institution of sorts. Escape came with Colors, the Benetton-sponsored magazine he founded with Oliviero Toscani. Here Kalman found his true mtier. He could hone in on how design could be used as a tool in the communication and propagation of his ideas.

Returning to New York in 1997, after a three-year stint as full-timeColorseditor in Rome and a battle with cancer, Kalman re-established a leaner M&Co with a new mission focused on the creation of ideas. Gone were the logos, brochures, motels, tomato sauce or corporate bullshit, proclaimed Kalman. Knowing he had only a short time to live, he only took on clients that mattered to himand found a way to make commercial art serve society, the ultimate client.

-Adapted from "The Man behind the M" bySteven Heller