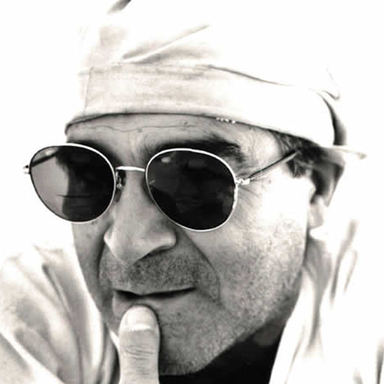 Whatever Tony Palladino creates, it exudes style, beauty and a personal statement. Whether it's a poster, a painting, a book jacket, a sculpture, a print ad or a television spot, the uniquely ubiquitous Palladino touch is always present and accounted for.

Tony Palladino was born in Manhattan in 1930. His parents were Italian immigrants seeking a new lease on life in America. Times were tough and work was scarce yet Tobio Palladino always managed to put meals on the family dinner table. Growing up amidst the Depression naturally made Tony hard-as-nails. He was street smart and rumor has it, still has a nasty left hook! Behind his stern, compact exterior, however, lurked an artist of immense sensitivity.

In 1938, Tony sneaked into East Harlem's Triboro Burlesque. This proved to be his first memorable visual experience. Such fascination with the stark visual realities of the big city eventually motivated Tony to feature them in his work.

Believing the pen was mightier than the sword, Tony Palladino enrolled in the High School of Music & Art. The year was 1946. During a design class, he met two other brash kids and formed friendships that lasted personally and professionally over the next forty years. Those classmates turned out to beGeorge LoisandBob Gill. This triumvirate became part of a new breed of maverick graphic designers; a group of highly motivated movers and shakers that helped reshape modern-day visual ideology. Their vitality on and off the streets of New York gave them the perfect education necessary to take the design world by storm. All rules were effectively broken. When it comes to breaking rules, nobody does it better than Tony Palladino.

He gives new meaning to chewing gum, street signs, hubcaps and crushed packs of cigarettes. Each becomes a central theme, resonating and reflecting Tony's inner self. His work is a product of his environment.

At Music & Art, Palladino began his formal training, immersing himself in the art forms that stimulated him. He eventually transformed them into a style that was unmistakably his own.

George Lois expressed it best when he said:

"Tony was light-years ahead of the world. Not the world of art students, but the world of artists! He adored Dada (before MOMA) and drew like a Fra Angelico. He digested Man Ray, Mondrian, Malevich, Magritte and Matisse and it came out pure Palladino. "

In 1949, Palladino studied with the founding fathers of Abstract Expressionism, Mark Rothko and Robert Motherwell. The free-flowing, llinear and amorphous works of that movement were perfect outlets for Tony's creativity.

The Army put Palladino's creative endeavors on hold in 1950. When he returned in 1953, Palladino began a series of New York street drawings that had their roots in the Triboro Burlesque and other subsequent personal experiences.

The mid-fifties brought Tony Palladino into the mainstream of the creative world. His three very provocative visual puns promoting his proficiency as a book jacket designer demonstrate a highly mature, yet playful style. During this period, Palladino designed numerous covers and promotional pieces. His superb selection of typefaces coupled with new graphic concepts exploded everywhere. One of his personal favorites is a promotional piece he did for package designer Irving Werbin. It's a brown paper bag with Werbin's name visually incorporated with the word 'packaging. Tony created a design that's truly timeless and inspiring.

It was work like this that led Bob Gill to introduce him toSilas Rhodes, the founder of New York's School of Visual Arts. As a result, Palladino began a love affair with teaching and the School that's still going strong.

Aside from his design, illustration and portfolio courses, Tony created a stunning array of posters for SVA. They no doubt, captured the enthusiasm and imagination of countless students. HisFlower Pot by Numbers, Pencil andTunnelposters voice some highly charged visual and educational statements.

The early and mid-sixties brought sweeping sociopolitical changes to the world. JFK's assassination and the war in Vietnam became backdrops for "Palladino's Palate." While studying withIvan ChermayeffandRobert Brownjohnof the Yale School, Tony began experimenting with various forms of mixed-media sculpture. One of his most compelling was done in response to radio censorship. EntitledRadio Is Dead, it consists of an old, cathedral-style radio, fitted with copper nailed over the entire wooden shell. What a way to hammer home a point! Again, a potent, almost iconographic message that only Tony Palladino could convey.

Tony's love of architecture resulted in the design of some truly memorable covers forArchitecture & Engineering News. The covers, brimming with marvelous visual ideas, really didn't need the accompanying feature copy. Tony's designs did all the talking.AIA In MiamiandPlastics In Architectureare particularly wonderful examples.

In 1964, Tony Palladino began another chapter in his illustrious career. His old friend, George Lois, then a principal at Papert, Koenig, Lois Advertising, hired Tony as an art director. Advertising would never be the same! Together, Palladino and Lois blazed new trails blending perfectly with the 1960's impetuous approach to advertising. From sketch pad to finished product, Palladino and Lois breathed new life, wit and panache into an old, somewhat stagnant profession.

Take an ad P.K.L. did for Evan-Picone, selling the merits of resilient women's sportswear. Art directorSam Scaliand copywriter Renee Guion pulled it off by satirizing the popular television seriesThe Untouchables. The headline read TheUncrushablesand featured two women wearing Evan-Picone skirts and blouses surrounded by some ominous-looking 1920's gangsters. One was Lois; the other was Edward G. Palladino. That's the kind of advertising P.K.L. was famous for. Not only did they create great ads, they appeared in them.

1965 marked another milestone year in the life of Tony Palladino. His cane-shaped lamp design, made of polished aluminum, was accepted into the permanent collection of New York's Museum of Modem Art.

As the turbulent sixties drew to a close, Palladino turned his attention to more artistic endeavors. He worked in various media, from Craypas to plastic milk jugs, each heavily imbued with a basic idea or concept, a vehicle with which to express himself.

Tony Palladino literally has the power to create life in inanimate objects! His 1976 homage to the Triboro Burlesque is a perfect example. At first glance, it's just a strange, colorful medley of pressed pieces of chewing gum. Not to Tony. For him, it's a harsh, visual reminder of what the Triboro was like inside, under the seats and in the seedy dressing rooms. When one looks at such a dazzling visual of Tony's, you can't help hearing the echoes of frantic whistling from its satisfied clientele while a honky-tonk piano trio playsNight Train.

The 1970's were wonderfully productive years for Tony Palladino. His abstract sculptures perfectly complemented his soft, Matisse-like paintings and drawings. His posters continued to grace New York's subways, adding a touch of artistic class to an otherwise barren, underground world.

Presently, Palladino is as active as ever. His work is still talked about and exhibited throughout the world. He continues to paint, teach and consult with advertising agencies on a variety of interesting assignments.

Palladino's biggest thrill came in 1985, when the School of Visual Arts honored him with a one-man retrospective gallery exhibit.Richard Wilde, SVA's Co-Chairman of Media Arts, recalls an amusing anecdote leading up to Palladino's opening:

"Tony thought it would be a nice touch to add fresh-cut flowers to the gala opening night reception. Hours before, Tony was walking down Third Avenue and rescued an old, rickety, wooden chair destined for the garbage truck. Palladino, chair in hand, burst into SVA, ran upstairs to one of the studios and began painting his own flowersright on the chair! He then proceeded to hang it on the wall next to the gallery entrance

"Having talent isn't worth much unless you know what to do with itIt isn't the light at the end of the tunnel, it's the light from within."

Tony Palladino has an immeasurable wealth of talent. The joy he's brought to all who have experienced it is proof he knows what to do with it. His very own special light from within continues to illuminate and enlighten the design world.