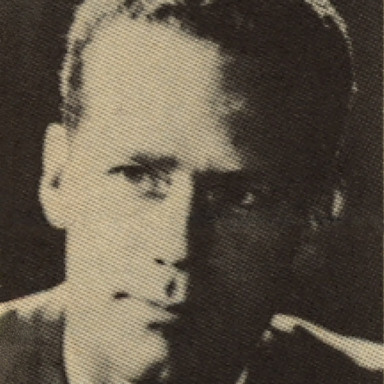 Shortly before graduating from Brown University, Wallace Elton was interviewed by N.W. Ayer's legendary art director Vaughn Flannery. The youthful Elton was responding to a headline asking, "Have you ever thought of art directing as a profession?" In 1929 few people had, including Elton, who announced his desire to be a copywriter. "You can be a copywriter anytime, Flannery informed him succinctly. "What I need right now is a layout artist." Thus was launched a 40-year career which saw Elton alternately and sometimes simultaneously as art director and cartoonist, copy chief and painter, ad-agency executive and photographer, before his retirement in 1966 as a member of the board of J. Walter Thompson and a senior officer of the American Association of Advertising Agencies. Not content with this remarkably multi-faceted career, Elton immediately developed another as a leading figure in the International Executive Service Corps, an organization of experienced executives who take their knowledge and talent to the needful nations of the third world in an effort to broaden their job markets and to enrich their economies, a task he sees as an extension of advertising and its aim of raising living standards. Today, at age seventy-six, he approaches his global ventures with the same tireless enthusiasm displayed in his youth.

His work on the university humor magazine, theBrown Jug, where Elton succeeded S.J. Perlman as editor, writer and illustrator, impressed Vaughn Flannery initially. At a time when college magazines had greater stature than in today's glutted marketplace, Elton recognized his need for art instruction and became a regular 'unregistered' student at the Rhode Island School of Design. From Providence the road led to Philadelphia and the memorable "Three Little Men" campaign for Atlantic Refining, with a slight detour then to Hollywood, of all places, to design imaginative sets for radio shows, of all things, and for beautiful publicity backgrounds for such stars as Rosalind Russell and Jane Wyman. Back in Philadelphia, still with Ayer, and while also working as a freelance copywriter, he created 'the boy in your street' for the Boys' Club of Philadelphia, which gained national attention. Such activities led to invitations from the University of Pennsylvania where he gave talks on marketing from the creative man's viewpoint. It was at this time that art director Jack Jamison first met him and was struck even then by Elton's professionalism: "He garnered respect from everyone he met. It was because Elton had such respect for others."

Says Elton in response: "If you're aware of the skill with which media people, account people, typesetters and all the rest do their work, you don't think yours is the only important job." This philosophy, in part, accounts for the ease with which he moved from art director through the corporate life.

UnderCharles Coinerat Ayer he soon found himself supervising such accounts as AT&T, W.K. Kellogg, the Container Corporation and Ford, the last of which prepared him for the Ford creative leadership which came later at J. Walter Thompson. It was Coiner, too, who directed him toward New York, but his career there, like that of so many of his generation, was interrupted by three years of military service, during which he saw sea duty in the Atlantic and Caribbean aboard aircraft carriers, and rose to Lt. Commander. At the same time he authored two books, "Navy in the Sky and "A Guide to Naval Aviation."

Returning to Thompson, he found himself in many roles: art director and copywriter, TV pioneer and creative supervisor, account manager and leader in corporate management. One of his most admired talents, that of dealing with people on every level, proved invaluable working with major clients like Pan Am, Lever Brothers, Scott Paper and Cheseborough-Ponds.

Meanwhile, his sense of the incongruous, first on view in theBrown Jug, began to reappear in a series of animal cartoons that resulted in the present syndicated newspaper strip, "Zoologic. In his foreword to an annual collection of cartoons, Elton speaks of "the zoo to which we all belong" and pursues his logic with the postulate that animals may say things that we humans at large often let go unsaid. Elton's animals, however, have not been confined to the comics but have also found their way into eminently successful post-war campaigns such as "There's A Ford In Your Future," or his 1950s vintage bear poster, which won the Kerwin Fulton Medal.

These were exuberant and imaginative times at Thompson under the leadership of Stanley Resor and his wife. This was a time for experimentation, when artists and copywriters were put together as teams. Elton, as creative supervisor, pioneered this idea in this golden age. Many of the various Ford campaign innovations were Elton's: seating Fords in different exotic parts of the world, entering the Falcon in the Monte Carlo rally for TV commercials, and signing the first exclusive contract with Chas Schultz for "Peanuts" in national advertising. For the introduction of the Thunderbird he put his photographic talents to work and spent months researching just the right angles and lighting.

His photographic efforts continued when he andNorman Rockwelltraveled the world for Pan American, the one painting, the other shooting fascinating people and places. Adventure, romance and human interest have always been Elton hallmarks. "In every man's heart there's a secret place he would like to go," read the headline for Pan Am. Elton's castle became a symbol and a lure for the airline. Today he has traded his vice presidency at Thompson for a vice presidency with the International Executive Service organization where he is in charge of all communications worldwide and is director of the Mediterranean and Near East sectors. The catholicity of his interests have led to the authorship of two recent books, "Responsibilities of Advertising People" based on his experiences in the Far East, and "The First Hundred Years of the American Yacht Club, which evolved from his long association with that group.

Wallace Elton has sailed a long, exciting and fruitful course. Frank Pace, Jr., chairman of the IESC, and former Secretary of the Army and chairman of General Dynamics, hails Elton's introduction to the Hall of Fame: "His selection is a proper recognition of not only his particular genius but of the fact that he has been intelligently and effectively dedicated to the benefit of mankind."