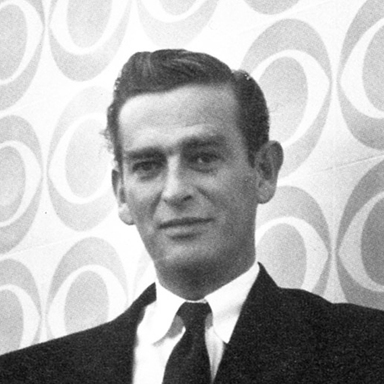 Greatness, the bard tells us, comes in varying waysas a natural inheritance, as a mantle that comes with achievement, or as some unexpected bolt that falls, even upon the unworthy, with all the force of a divine command. Modern corporations are prone to identify greatness with soaring production charts and favorably balanced profit and loss statements. Only lately have these industrial giants, goaded by some rather persistent finger pointing and strident voices, become aware that greatness demands something more than economic narcissism. Some seem genuinely astounded to discover that the improvement of life's own quality should fall within corporate responsibility. By a happy confluence of people and purpose, a few companies early in their corporate life considered an aesthetic awareness as much a natural part of their operating formula as any other business fundamental.

The expansion of "corporate identity or image" programs does not yet mean that we are levitating toward a firmament of corporate enlightenment. It does indicate that the pioneering efforts of a few notable companies have not been without effect. Those who show only a casual interest in graphic matters could not help but recognize that the most consistently enlightened of the forerunners is the Columbia Broadcasting System.

Long before such catch phrases as "identity" and "image" acquired their current glibness, CBS had founded its corporate lifestyle and aesthetic posture on the bedrock principles of intelligence, elegance, taste, and even beauty.

William Golden became the corporate art director of CBS in the late thirties and it was under his personal guidance that CBS was set on a design course that gave the company a greatness worthy of its intentions. If during his tenure William Golden was the perfect art director and tastemaker for this twentieth-century patron, obversely CBS provided the best possible matrix for the crackling, challenging intelligence of a Bill Golden. In this symbiotic atmosphere, Golden created an impeccable standard in corporate advertising and promotion, establishing a design environment that was as inspiring as it was intellectual, uncomplicated as it was profound, and inventive as it was free of cant.

Golden was above all a realist. He had a special disdain for high-flown theories and posturing that did nothing but obfuscate the clarity of a designer's vision. A good designer, he felt, should respect the stubborness of certain facts and should design accordingly, not indifferently. He considered the content of a communication and the inherent logic of a problem as fixed factors. Redundant as it may sound, Golden believed the designer should design. If the message is borne lightly, logically and tastefully, and produced faultlessly, it will reach eyes, ears and even hearts with a more penetrating effect. Golden did not suffer fools and their foolishness gladly, but he remained open to new approaches or new solutions to old problems. What he did seek was that elusive goal and excellenceone in which that hard beauty of crystal-clear thought was wed with the gossamer inventions of a fanciful spirit.

Bill Golden's training was hard and unromantic. From his professional background, we detect an interplay of social and personal forces that clearly left their mark on the way Golden perceived the designer's function. Golden was born on New York's teeming lower east side. His family was a large one, and poor, Bill being the youngest of twelve children. 1911 was a time when the American dream may have had more prominence in the public reverie than it does now, but an art education was not looked upon with any kind of favor by hard-laboring immigrant families. The exigencies of the times demanded that there was to be a clearly defined job at the end of the educational tunnel. So, Golden went to one of the city's schools, bluntly called Vocational School for Boys. Photoengraving and "commercial design" constituted the core of the curriculum and there his formal education ended.

Setting off to California, Golden worked for a lithographic and photoengraving firm, following this by a stint with theLos Angeles Examinerwhere he did ad layouts.

Returning to New York, he moved a little higher on the design ladder, working in the promotion department of the long since vanished newspaper,The New York American. The turning point of his career arrived in 1936 when his work aroused the attention of the distinguished art director and savant, Dr.M. F. Agha, who was then making his own history with the Cond Nast publications. The year with Agha was clearly the catalyst that unlocked the creative wellspring of the young Golden. Apart from the sophistication garnered from this extraordinary relationship between an ingenuous apprentice and an urbane erudite, world-traveled tastemaker, Golden learned in practice those lessons that were to become the keystone of his own practical philosophy. Golden summed up his debt to Dr. Agha in the simple declaration, [Agha] forced the people who worked for him to try constantly to surpass themselves." That simple but demanding method became the unwavering guideline for Golden when he became the art director of CBS, just three years after he had joined the company in 1937.

Those who worked with Goldenand the list includes some of the most distinguished practicing designers and artists of our timesremember vividly, and never with regret, Golden's clinical analysis of what they thought was their best effort. If there was a temporary pain of defeat, it was more than assuaged when the crestfallen found a greater victory in the second attempt.

A great designer can be remembered for any or all of many virtues. If there is one strong current that seemed to bring together Golden's diverse capacities, it was his uncompromising aesthetic honesty. Moreover, for all the stern exercise of his judgments, he possessed great personal and professional modesty. In working for a company whose very business was communication, Golden recognized a special responsibility. No copywriter could slip by a vague thought, a careless statement or an awkward word. Golden had a keen appreciation of the written word, respecting its function and the consequences of its use. That respect carried over into his typographic design, which was always aglow with elegance and exquisitely crafted. In the same spirit, Golden sought out the best image-makers to breathe the power of their sorcery into the printed page. Who else but a Topolski, with his bravura style, could capture the panoply and color of the British coronation? Who but aBen Shahncould depict the poignancy of the world's benighted and have-nots? Bill Golden chose well because he was close to the soul of the artist and every artist knew that Golden would give his work the best graphic theatre that could be devised for its performance.

Golden left behind him a tradition of thoroughness. No detail that contributed to the realization of a total concept was beneath the designer's concern. To quote Dr. Frank Stanton, president of CBS and a long-time friend, "Bill believed that the way to command attention and win approval was not by being sensational or shrill or obvious, but by being distinguished, subtle, and original."

In June of 1959, Bill Golden shared the platform with distinguished scientists and social theorists at the annual conference on the nature of communication at Aspen, Colorado. His speech, entitled "The Visual Environment of Advertising," was a model of efficacyarticulate yet understated. Here and there it is punctuated with the twitting self-deprecation that assured us that if Golden's ideas were soaring, he was still firmly in contact with daily reality. He dealt with the confusion that surrounds the idealist designer in a business world and was over-sympathetic to the pain of designers caught on the Procrustean bed of commerce and art. An excerpt from that speech adds some defining brushstrokes to his portrait:

"I happen to believe that the visual environment of advertising improves each time a designer produces a good design and in no other way." And in speaking of prevailing thought, "We tend to overstate our case in the most complicated manner, and to confuse the simple purpose of our perfectly honest, useful little craft with the language of the sociologist, the psychiatrist, the scientist, the art critic and sometimes even the mystic. The obvious function of the designer is to design. His principal talent is to make a simple order out of many elements. The very act of designing exposes elements that are inconsistent and must obviously be rejected. When he is in control of these elements, he can usually produce an acceptable design. When somebody else controls them, the best he can produce is a counterfeit: that is why at some stage of his maturity he feels the need to have a voice in the content itself."

Later that year Golden died suddenly. That he was only forty-eight years old only deepened the sadness of his death. Golden was a many-sided man whose contribution as a designer who worked waist deep in the swift-flowing stream of commerce leaves us with an exemplary model for the designer, as well as for the business itself. Dr. Stanton, in his prefatory tribute to "The Visual Craft of William Golden," wrote, "His was a powerful influence that went out way beyond those of us who were prodded into doing our best by the very proximity of his vigorous personality. His influence reached out to creative forces everywhere, bringing them into new fields. And, even more importantly, giving them new standards of excellence."