Mondays have long received a bad rap, what with being the beginning of the work week and all. Fortunately Los Angeles-based multidisciplinary designer and ADC Member Grace Duong is bringing good vibrations to the much maligned day with Mystic Mondays, a Kickstarter campaign featuring her modern take on classic tarot cards. More than just reimagining the deck, Grace uses her talents to breathe life into every aspect of the campaign, from quirky stop motion animations to even an app available in the App Store.

With her Kickstarter project in its final days, we caught up with Grace to chat about the details of this colorful campaign.

For the uninitiated, tell us a bit about the world of tarot. What made you decide to bring together the mystic with the artistic?

My cousin gifted me a tarot deck about eight years ago and I never fully related to the art of the way the descriptions were written - which inspired me to create my own! I wanted to use color in a way where it would induce a certain feeling, as energy carries vibrations, and each color has its own vibration. 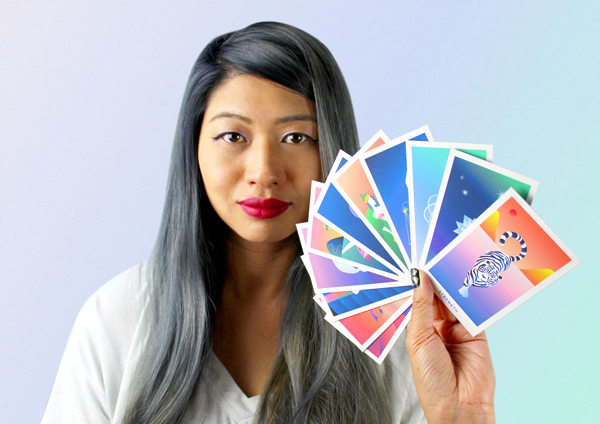 This all started from my personal interest in spirituality and art, so combining the two felt natural to me. Tarot has a misconception of being scary and dark, so my take on it is that it can be a light-hearted way for you to incorporate into your day to day spiritual practice. For me, it’s much more about listening to your intuition more so than predicting your future.

Art can be translated across all languages and communicated in an instant. It also has healing and therapeutic properties to it which helps us connect to the tarot in a deeper way. My intention with this tarot is for people to use it as an intuition tool and to connect with their inner voice.

"Art can be translated across all languages and communicated in an instant. It also has healing and therapeutic properties to it which helps us connect to the tarot in a deeper way."

Walk us through your creative process on this particular project — did you approach this one differently, or is there a patented “Grace Duong Method” to how you work?

I went through my typical process - I created a moodboard, sketched some cards out, and then went into the computer. I will admit that I did struggle with this, wanting it to look a certain way and yet, wanting this project to speak for itself. After a trip to London, I felt inspired to create them and knocked the 22 cards out in the month of December 2016. The cards came out differently than expected with much more vibrant colors. I did primarily work in digital, and sometimes it would help to sketch the cards before going into the computer. That helped me connect conceptually what each card meant and how I wanted it to visually communicate.

I’d say the “Grace Duong method” is to approach every project differently. I’m a person that needs variety, am resistant to routine, and like to stimulate my brain with new ideas. Even with the Kickstarter, it didn’t stop with the cards. There were many components - the video was done all in stop motion (shot frame by frame), the design and development of the Mystic Mondays beta app, and all the social & marketing materials moving forward. Mystic Mondays was designed holistically! Even though the cards were all digitally illustrated, that didn’t mean that couldn’t be translated to video in a different way, in this case, stop motion. I wanted to create a world where Mystic Mondays could live, not just a product.

“Pick a card, any card.” Now that you’ve completed the deck, which card’s design is your favorite — is that strictly a design choice, or perhaps you put your best effort into a card that has special meaning?

I have a bunch of favorites, but I’ll highlight two!

The Devil was the first card I sketched and digitally illustrated, so that one has a special place in my heart. I also interpreted the card as, you can be your own devil sometimes, holding yourself hostage to your own limiting beliefs. You have the freedom to step away at any point, however it can be hard for us to see that we can step away from our “addictions” when we want to. We have a choice.

The Moon is also one of my favorites, as I went into a particularly meditative state when illustrating this card, and after I was finished 3-4 hours later, I saw that I’ve seen this environment in a dream! A night sky, with a moon in between two large rocks. The Moon is all about your subconscious, so if that’s not my subconscious speaking, I don’t know what that is!

This is your first Kickstarter project, no? What inspired you to give it a try? What did you learn about the platform that perhaps came as a surprise to you, and what would you tell other enterprising creatives thinking about going that route?

Yes, this is my first Kickstarter! I am always up for new challenges and saw Kickstarter as something new that I could learn and grow from. Plus, it is a great test to market to see if people are even interested in buying your product in the first place! Offhand, it did surprise me how much longer it took to put together a Kickstarter campaign. I definitely would recommend a couple of months of prep time before launching your Kickstarter. It not only involves the design of your project, but also the video, the page graphics, the marketing strategy, and all the little details within each of those. It’s important to be consistent once you launch and planning ahead will definitely put you over the edge.

"It’s important to be consistent once you launch and planning ahead will definitely put you over the edge."

What’s on the horizon for you, creatively and professionally speaking?

I definitely want to continue forward with Mystic Mondays and can see it being something more than just tarot cards. Mystic Mondays as a brand is all about beginnings and empowering yourself by setting intentions and listening to your intuition. As a project, it combines my interests of art & design, spirituality, and entrepreneurship.

With that said, I have a ton of different ideas all the time, and so you can definitely expect more projects coming from me that aren’t Mystic Mondays related. It keeps my mind, body, and soul fresh & energized to try new things, and also to keep me interested! On a larger scale, I want my creative projects to have that dash of altruism, so that these projects can serve to help other people!

Professionally, I am still freelancing as a designer and art director, and will continue to maintain my practice. I’m still taking on some branding projects while creating and producing the Mystic Mondays cards and am always open to collaborations, new projects, and supporting others in their visions for their own endeavors. Let’s work together!

Mystic Mondays has been fully funded on Kickstarter, but the clock is ticking on the project being able to reach its first awesome stretch goal. We encourage you to check the campaign out! If you pledge by today, you'll also earn a chance to win a one-of-a-kind 78 card Mystic Mondays deck!

ADC and One Club Members and Young Guns winners get featured here on the ADC  website and across our social media channels. Drop us a line at membernews@oneclub.org. Not yet a Member? Join today!