Artist Kadir Nelson, Illustration Jury Chair of the ADC 99th Annual Awards, was visiting the United States Capitol building in Washington, D.C. when he noticed something striking about the collection of paintings hanging in the rotunda. They depicted pivotal moments in American history, including the British surrender during the Revolutionary War and the signing of the Declaration of Independence, but there was a significant absence.

"I saw the paintings that told the story of the beginnings of America, and those paintings leave African Americans out of that visual story," recalls Nelson. "I thought, wow, that's really unfortunate for all the school kids who come through here. They are left out of that story. How does that make them feel? In the story of freedom, they are not in it?”

That trip to D.C. compelled Nelson to write "Heart and Soul: The Story of America and African Americans," a picture book for young adults that tells the story of the nation and African Americans. "Heart and Soul" is just one of more than 30 books Nelson has either authored, illustrated or both. Last year's "The Undefeated," a collaboration with author Kwame Alexander about African-American resilience, was named one of the best children’s books of 2019 by The New York Times. Just last week, "The Undefeated" was awarded the 2020 Randolph Caldecott Medal, for the most distinguished American picture book for children — joining such legendary childhood favorites as "Where The Wild Things Are" and "The Snowy Day". A traveling exhibition featuring paintings from the book recently opened in Grand Rapids, MI.

“I’m a painter by trade and an author by necessity,” explains Nelson, whose artwork regularly appears on covers of The New Yorker and on the walls of venerable institutions such as the United States House of Representatives, the Smithsonian’s National Portrait Gallery, the National Museum of African American History and Culture and the World Trade Center. His vast, award-winning body of work chronicles the history of Black America and includes editorial commissions, albums for Michael Jackson and Drake, books and postage stamps, as well as work for brands such as HBO, Nike and Disney. “I look for a really good story and the opportunity to create imaging that will allow me to grow as an artist, do something new or different,” he says.

Nelson grew up in Chula Vista, CA and began drawing at the age of three. He learned to paint from his uncle, an art teacher who took him under his wing and helped him develop his artistic talents. “He gave me a very strong foundation, starting at the age of 10,” he reminisces. “He taught me about lighting, color and how to paint with oils, which is still my medium of choice.”

Nelson studied art at the Pratt Institute in Brooklyn, New York and, after graduation, he landed a job as a visual development artist at DreamWorks SKG, where he worked on the feature “Amistad,” the story of a slave ship uprising. While on this project, Nelson met the film's producer, acclaimed actress Debbie Allen, who later asked him to illustrate her book, “Brothers of the Knight.” He started illustrating texts by other authors and eventually began writing his own.

Nelson is currently working on a book about the history of American music, another on the history of basketball and working a film celebrating the 100th anniversary of Negro League Baseball, a subject he also tackled in the first book he both wrote and illustrated, “We Are The Ship: The Story of Negro League Baseball.” The projects require a deep dive into the subject matter that includes years of research and painting and often inspire future endeavors. “I wrote the Negro League book because I was asked to do a painting of the league and had to do a lot of research to learn the story,” he explains. “I really got hooked on the subject matter, and it kind of evolved.”

Comparing the creative process between writing and painting, Nelson admits, “writing is a lot harder for me than painting.” Writing is a lot like sketching, he continues, “because that's where you are doing a lot of thinking and working out your ideas and being actively creative, moving things around, shifting things.” Once the story is done, then comes the sketching for the art, and finally the painting. A single book can include 40 or more pieces of artwork and requires years of dedication.

Nelson explains that while painting is first passion, all of his work, whether a cover for an album, magazine, book or film, has a commonality. "I try to straddle the line between fine art and illustration. Magazine covers, fine art, books, it all works together," he explains. "It's all about telling a story. That’s really the focus of my work. Telling a human story."

"I want to feel good about the artwork that I create, tell a good story and create art that I’m proud of and want to live with."

The artist’s recent cover painting for National Geographic tells the story of the last known American slave ship, titled "Flight of the Clotilda.” Like much of Nelson’s work, the dramatic image addresses some hard truths about American history, but no matter the subject matter, he always strives to paint a positive picture. "I don’t like to do artwork that has any negative energy or political artwork,” he explains. “I do like to have a clear voice in my work, but I prefer not to create artwork with a negative spin. I want to feel good about the artwork that I create, tell a good story and create art that I’m proud of and want to live with.”

Discussing his role as Illustration Jury Chair for the ADC 99th, Nelson says he will judge the entries the same way he considers any piece of art. “The craftsmanship is important, the storytelling and the emotional content,” he says. “When I look at a piece of artwork, it’s really about how I connect to it.”

Finding an emotional connection and communicating a human truth is critical to the creation of all his work, whether it’s writing or painting. “The commonality is finding stories that speak to something that is bigger than us. What is the string that runs through the story of the Negro League Baseball players or Abraham Lincoln, American music, Louis Armstrong? What is inside them that I can relate to, that everyone can relate to?” explains Nelson. “That’s really exciting. It’s like a game to find out. How does the story of the hero resonate with me and through this history or story that I'm trying to learn and share?”

Whatever the story or final form the final product takes, whether as small as a stamp or as large as a mural, “first and foremost on my mind is creating,” he says. “Creating something beautiful and meaningful.” 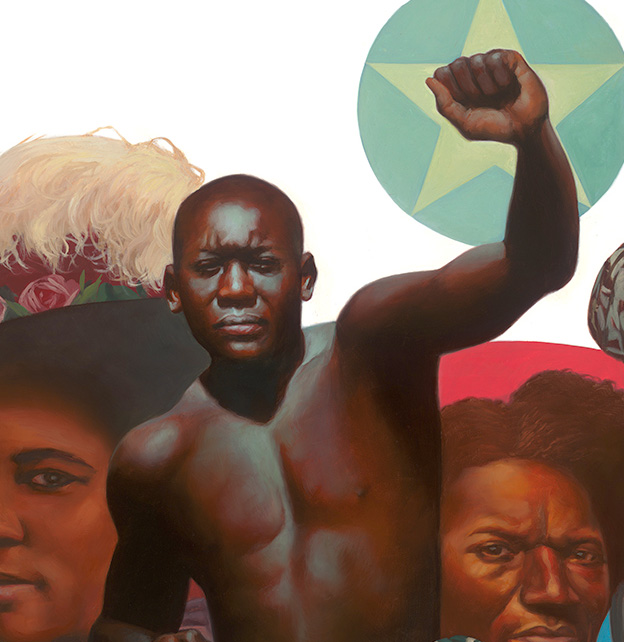 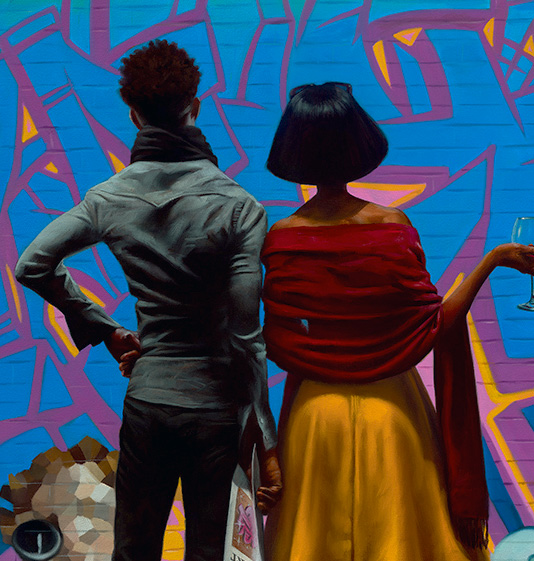 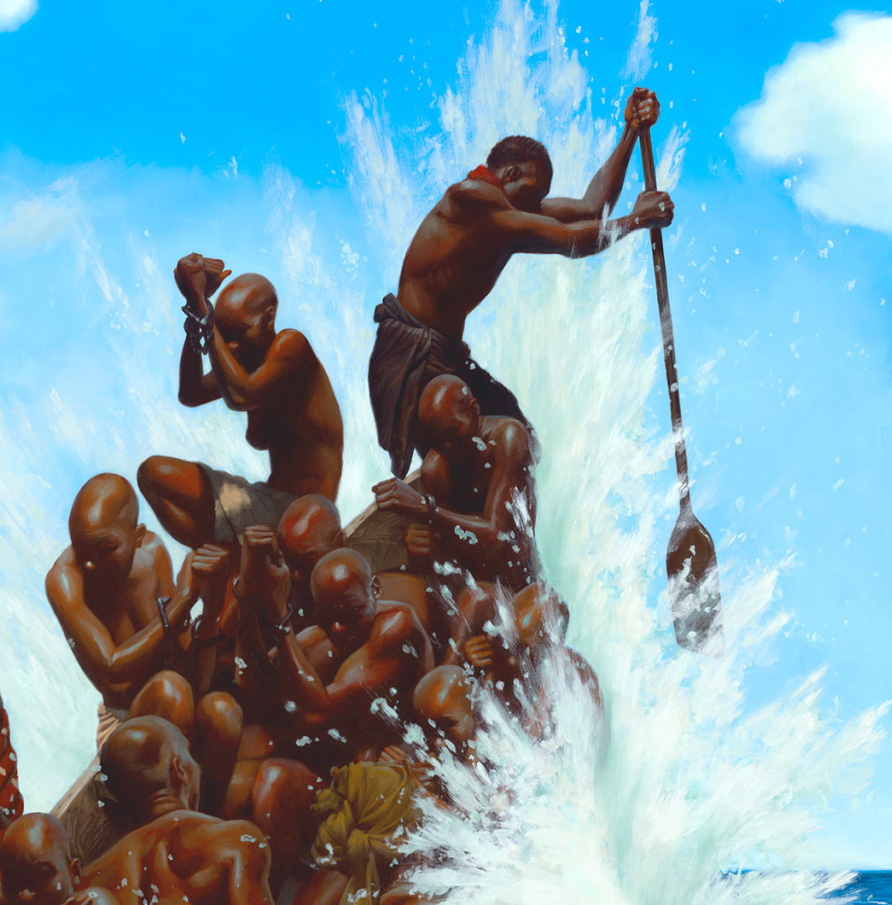 "Flight of the Clotilda" 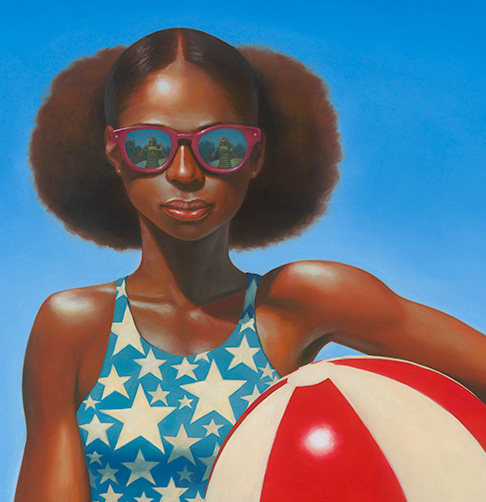 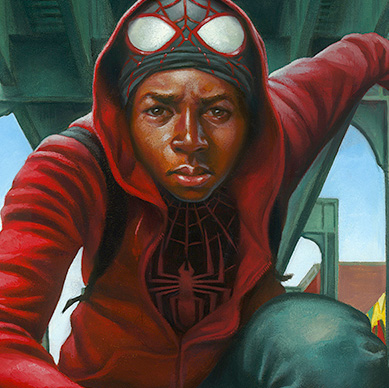 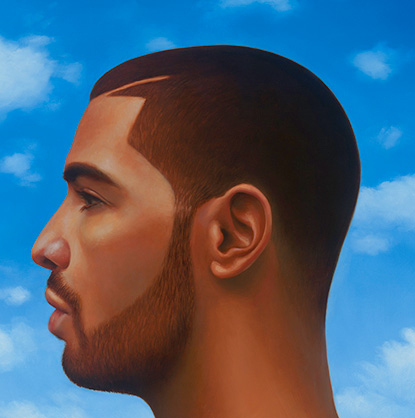 "Nothing Was The Same" 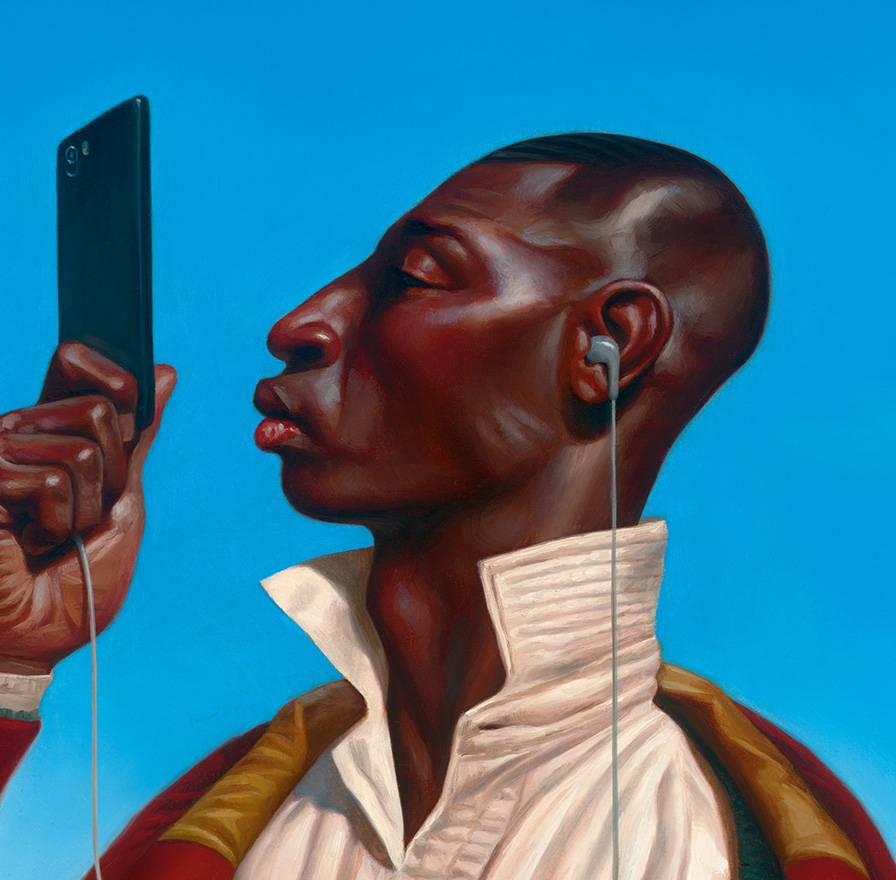