The Call for Entries period of The One Show 2018 is finished, and we now shift our attention towards final judging. And while most agencies scrambled through to the bitter end to get their entries ready, some took advantage of our quarterly entry periods to submit their work much earlier in the year. These entries have already gone through preliminary rounds of judging, with the top scoring entries making the shortlist, moving directly to the final round next month.

Ahead of the final round of judging, we are highlighting some of the shortlisted work, focusing on some of the smaller agencies on the playing field. Our next shortlister up to bat is "ARTLENS Exhibition" by Potion New York for the Cleveland Museum of Art. Matthew McNerney, Potion's Director of Design, took time to open up to us about the project which has been shortlisted in the Interactive category.

Experiential and interactive environmental design has been growing exponentially. What have been some of the most exciting changes in the industry as a whole? 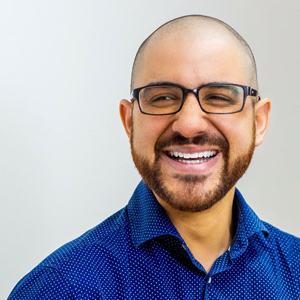 Matthew: We’ve seen our clients grow more ambitious and more trusting; ten years ago, this work was so foreign that it required serious selling-in: “Trust us. It’ll work. We promise!” Now we’re at a moment in this industry where we can go bold and not have to worry about losing the confidence of our clients — I think that’s a testament to the world growing more comfortable with embedded technology; the Internet of Things definitely helped that along.

The other exciting update is how sophisticated people’s personal devices have become—now we’re able to leverage a visitor’s phone to build experiences that are no longer confined to buildings or schedules.

Could you tell us what ARTLENS is all about?

The original vision—set forth by the gallery’s benefactor—was to leverage technology to make art more approachable. We’d never worked with the Cleveland Museum of Art, but the first iteration of this experience, designed several years ago — Gallery One — was a watershed moment for museum design. One of our competitors developed a series of interactive games. The games were fun, and the experiences were compelling, but it didn’t fulfill the museum’s larger mission. The visitors weren’t learning anything, they weren’t visiting the rest of the museum, and they didn’t find the art any less intimidating.

When we were hired, we had to take the Physical Challenge: preserve all of the “fun” of the previous experience, but make sure it delivered in the ways the previous experience didn’t. The trickiest part was to make sure that the digital experience never trumped the wonder of experiencing the real art. That meant creating an interface that always reinforced the “real” over the digital. We ended up developing a series of interactive “tools”: experiences that were really fun to play with in digital form, but were easily replicable in analog form once you visited the museum’s other galleries. That ensured that there was real learning happening, with real staying power. The results have been staggering; over 88% of visitors have acknowledged wanting to see the real art and over two-thirds have reported being able to understand it much better.

"The trickiest part was to make sure that the digital experience never trumped the wonder of experiencing the real art. That meant creating an interface that always reinforced the “real” over the digital."

There are quite a few components to this installation. Was there a friendly rivalry at Potion over who could create the coolest element?

Surprisingly, they were all created by the same small team, and in fact, a lot of the code had to be shared amongst multiple developers to make sure everything “talked” to each other. There were a lot of all-nighters. Potion isn’t really a competitive place; we all have such specialized skills that we really need to rely on everyone’s expertise and get out of their way. What did happen was everyone pushing the limits of what’s possible: often our design team would push back and demand, “There’s gotta be a way to figure this out!” and a few days later our development team would concede that they’d cracked a solution. From what I understand of Pixar, they have a similar arrangement: always pushing the limits of what’s possible, even when it sounds ridiculous.

Quite often things change from the original idea to the final execution, especially when you’re dealing with technology — you never anticipate every possible human interaction. Were there any surprises along the way, anything that made you change direction and try something new?

Oh, absotively posilutely! It was a roller coaster. When we started, the initial direction was to silo all of the games into their distinct genres: games about symbols, games about emotion, and so on. CMA had the brilliant insight that artworks were never just about one thing, and that we should merge all of the games together. That required us to re-think the whole experience, and it resulted in our choice to make a sweeping 70’ interactive wall that contained everything en masse, rather than six separate zones. We also had to simplify, simplify, simplify. Up until the very last moment, we were editing games. Luckily we have a genius for a UX Director, and developed the code to be exceedingly nimble. That allowed us to cut out entire chunks of some games without having to start over. That’s one thing we learned from this whole experience; there’s no such thing as too much prototyping.

My personal favorite is the Express Yourself interactive. It was borne from my own life experience. Whenever I visited a modern art museum with my mother, she would visibly cringe in front of a Kelly or Pollock, scrunching her nose in a moment of disgust. I thought to myself, “If people can have such visceral responses to art, what if we photographed them, analyzed them, and then challenged their knee-jerk reactions?” So that’s what we did: we created a rapid-fire “speed round” where you were exposed to approximately one artwork per second. Each time, we’d snap a photo of your mug, and then analyze it with facial recognition software to see if you were happy, sad, angry, etc. At the end of it, not only did you walk away with a funny animated photo-booth-ish GIF of you making funny faces, but we also challenged you with a specific mission: go and find that artwork in person and see if your initial reaction to it still stands. All of these experiences, no matter which of the games you did, all focused on different ways of getting the visitor to look more closely, in the most engaging way possible.

Is there anything you’d change or tweak if you had just a little more time, or wanted to extend the campaign even further?

The beauty of code is that it allows us to continue refining and enhancing throughout the life of the project, even when insights are garnered well after the initial launch. Recently we updated the software that lets you pick a new artwork. We made it even more random to ensure that the full breadth of Cleveland Museum of Art’s collection surfaces.

Furthermore, when we developed the backend software, we created it to be so user-friendly that any of the curators or staff could add or remove artworks without having to call us—that’s huge. The previous iteration of this Gallery was a black box; you couldn’t change the art or the games—our version is completely updatable.

"The beauty of code is that it allows us to continue refining and enhancing throughout the life of the project, even when insights are garnered well after the initial launch."

What’s next for Potion? What new work should the world be keeping an eye out for? After all, as this year’s campaign says, if you win you’ll become “famous famous”!

We’re currently developing an incredible experience for a children’s hospital in New York that launches in a few months. And despite being fully digital, it’s not going to feel that way at all. It’ll feel warm and intimate. That’s what we’re most interested at Potion: harnessing the power of digital to amplify the best of humanity. When we do our job right, our work doesn’t feel like tech, it feels like poetry.