For some people, nothing beats a good hamburger at a summertime barbeque. But, if they knew the exact details of how said hamburger was manufactured and processed, they would probably be eating broccoli for the rest of time.

Amazonia Exotic Meats is an initiative started by one our One Club for Creativity members Victoria Parizzotto. It was a stunt campaign that took place in New York City to educate people on the illegal rainforest fires and cattle farming practices that are occurring in the Amazon.

As an illustrator, Vic created a series of politically charged illustrations for social media to keep this project alive– and to help keep the endangered species of the Amazon alive too.

We talked to Vic about her work and her ultimate message: Illegal destruction needs to end.

When did you really get into drawing? 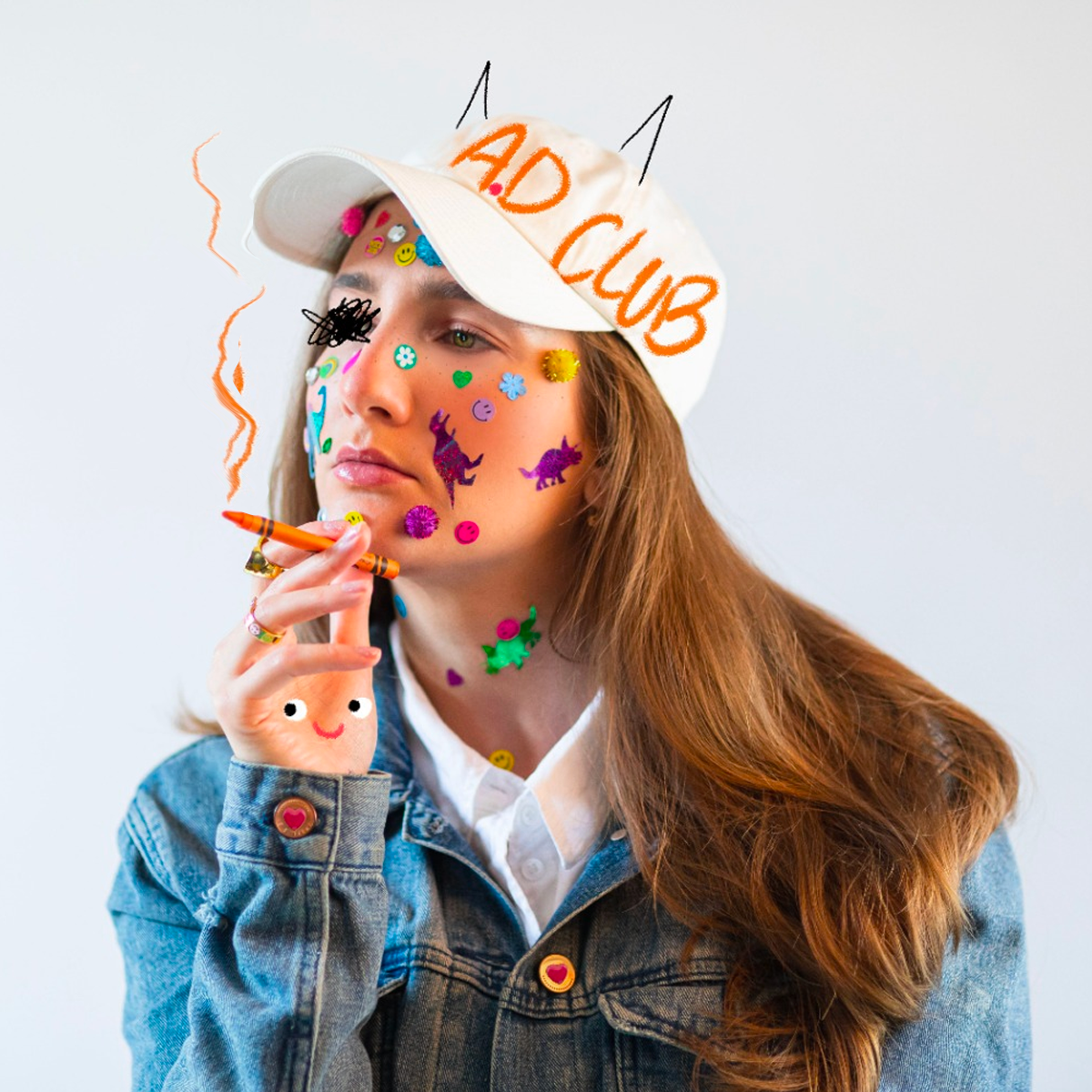 I’ve always liked cartoons, doodles, and drawings. I used to go to school early in the morning in Sao Paulo, Brazil, and on the weekends I would still wake up at 6 am. Of course, my parents were not up at that time, so I had to find something to keep myself busy. Watching cartoons from Nickelodeon, Disney Channel, and Cartoon Network was part of my morning routine, and soon I began to draw my favorite characters to create my own stories. This is one of the reasons why I love illustration, it’s something that starts at childhood for many and becomes a form of expression as we become adults.

"This is one of the reasons why I love illustration, it’s something that starts at childhood for many and becomes a form of expression as we become adults."

What are your ideal drawing conditions?

I love drawing at home where I have books, good wifi to look at references, and a nice work space, but I never know when creativity will hit, so I always carry a notebook and some pens in my tote bag. Despite the fact that I barely do commercial hand drawings, I love sketching and doodling at random cafes in New York as well. I always try to create rough illustrations on paper first, because it helps me visualize an idea before I take it to the digital interfaces that I use for work.

Why did you decide to pursue art via advertising?

Before I decided to work in advertising, I went to New Zealand to learn Design & Animation. Back then, I was sure I was going to work at PIXAR, because I was obsessed with their films. I still love them, but I realized that long projects like film animations were not for me, as I prefer to work with shorter projects in terms of deadlines (it can take years to make an animation film and advertising campaigns are usually done in three months). I connected better with design because of that, but I was still looking for something that allowed me to use different creative skills. I was about to go to art school when a friend of mine told me about art direction and advertising, and Voila! I finally found something fun, creative, and dynamic that keeps me inspired and curious.

"I was about to go to art school when a friend of mine told me about art direction and advertising, and Voila! I finally found something fun, creative, and dynamic that keeps me inspired and curious."

How would you describe your illustrative style and technique?

I do digital 2D illustrations that mix surrealism and pop art. I try to look at mundane things from the modern world and give them an unexpected meaning. Most of my illustrations are playful, lighthearted, and colorful, but I’m always trying different techniques that push me out of my comfort zone. I feel like most creatives are too hard on themselves when it comes to sharing their work, and I’m not different. It takes me weeks to post something on social media. However, perfection is nonsense and sharing our work with our community is just as important as making it.

"Perfection is nonsense and sharing our work with our community is just as important as making it."

These illustrations are a progression of the ongoing initiative you started– Amazonia Exotic Meats– what does this project mean to you?

It means a lot to me since I’m originally from Brazil and haven’t eaten meat in five years. This project was challenging because it tackles different issues related to the fires in the Amazon Rainforest. Political, environmental, and animal rights are a few of the causes that Max (CW) and I (CW) tried to bring to this campaign to raise awareness about the illegal fires in the Amazon. We wanted to do something people would remember and tell their friends. We succeeded with the social experiment, and its key message which states “whenever you eat meat, you eat a part of an ecosystem.” 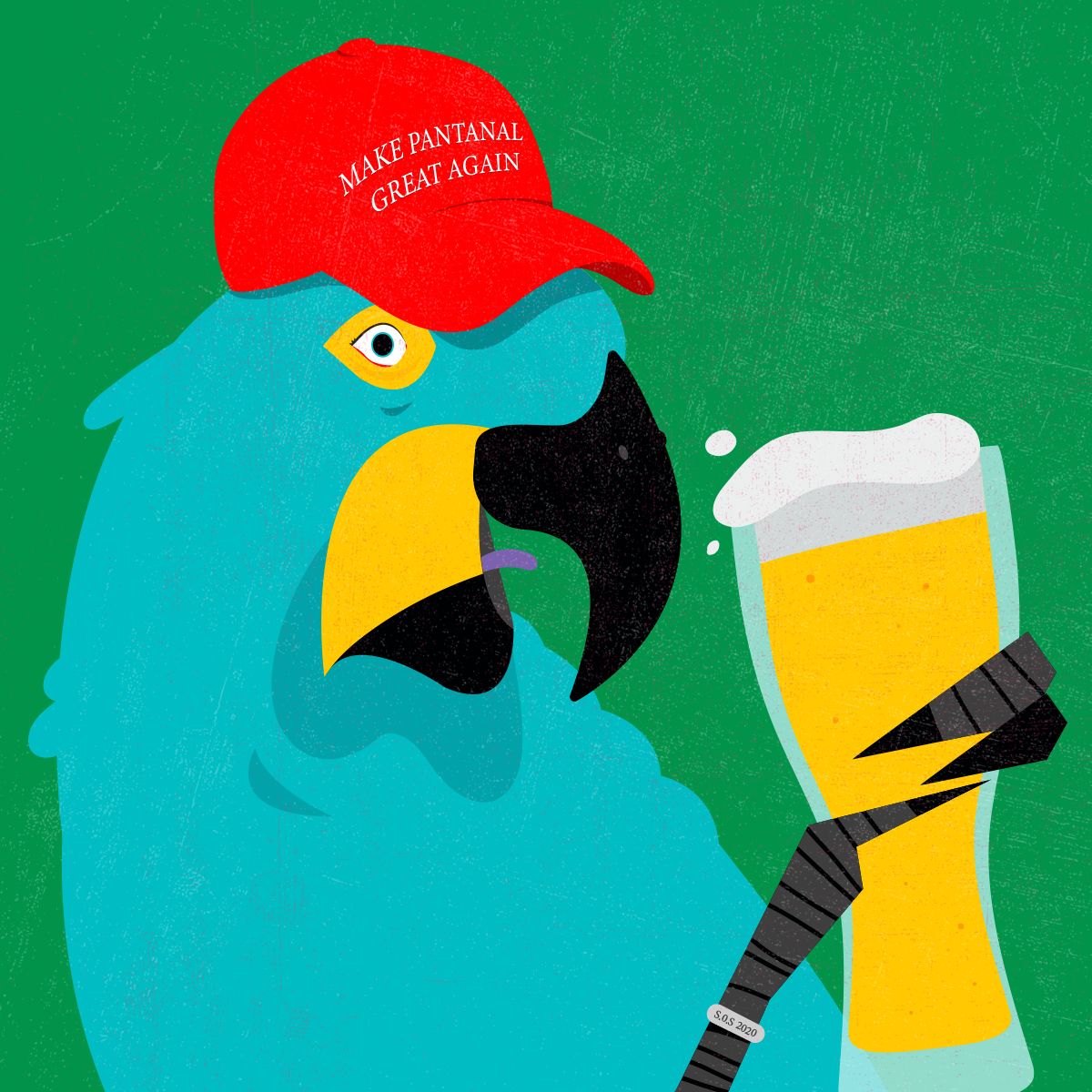 What inspired you to create these three specific images?

All of these animals suffer from the illegal wildfires in Brazil. People burn down forests to make space for cattle that eventually become a meal on the plates of those who still have meat in their diets. I chose to highlight The Green Tree Frog, The Blue Macaw, and The Jaguar in this project for two main reasons– they are popular in the Amazon Rainforest, and they are not served in American steakhouses, or cut and sold as steaks. It’s not part of many cultures to serve up these specific animals as meals, so they will surely spark a conversation in the US once people saw an imitation of these animals in the meat aisle. After all, sparking conversation is the goal for an awareness project like “Amazonia Exotic Meats.” 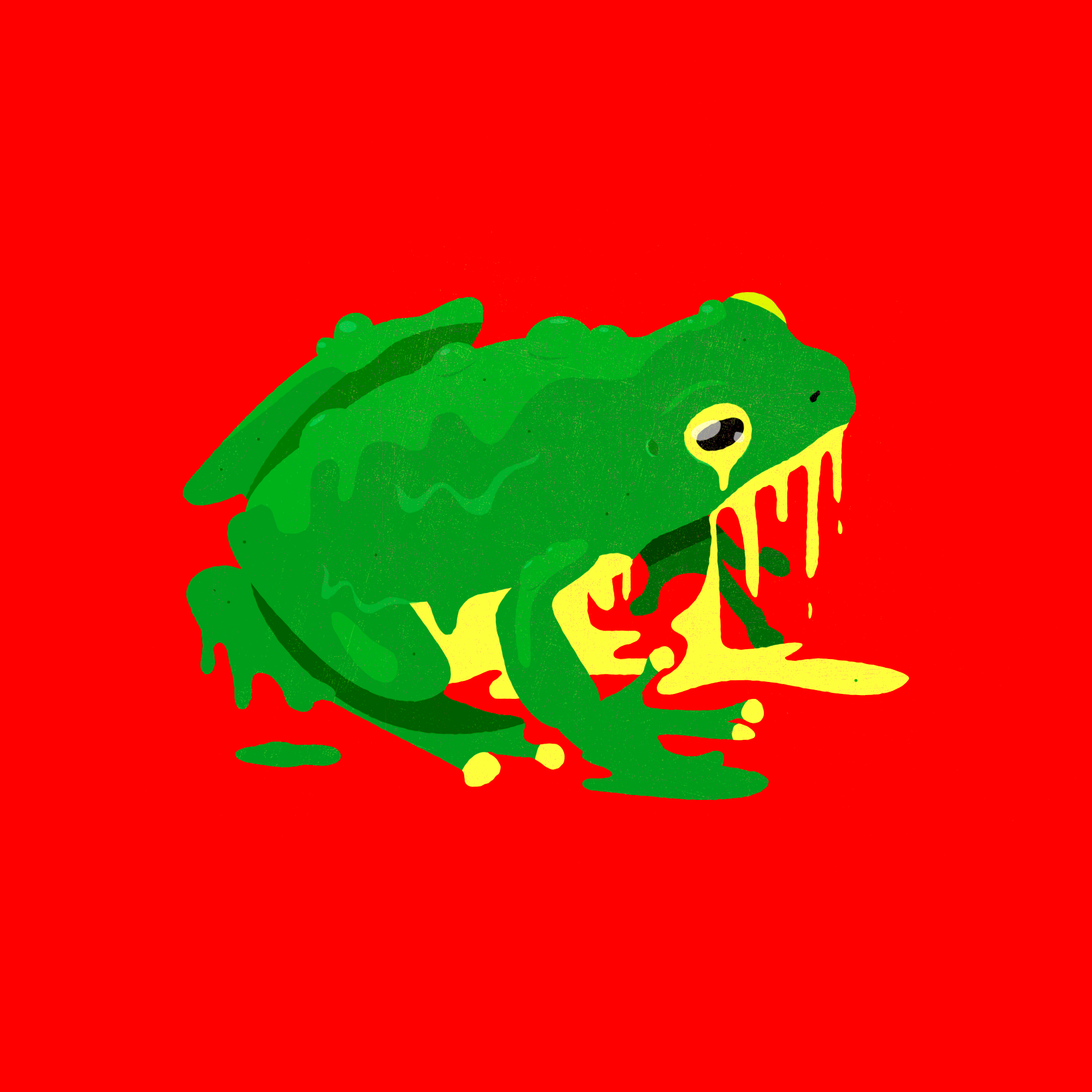 These illustrations work as separate pieces for people to engage with. Initially they might like the visuals just because they look interesting, but once they search for the project, they begin to understand the depth of Amazonia Exotic Meats. The Jaguar is wearing fire flame sunglasses– an item that is trending in US fashion. The Frog is melting because it was exposed to the heat of a burning forest, and The Blue Macaw raises awareness toward the Pantanal Forest, placing this issue on politicians that have had bad environmental policies toward nature in general. All of them were made for social media. I might turn the illustrations into merchandise and use the money to support the Brazilian rainforest and its animals in the future. 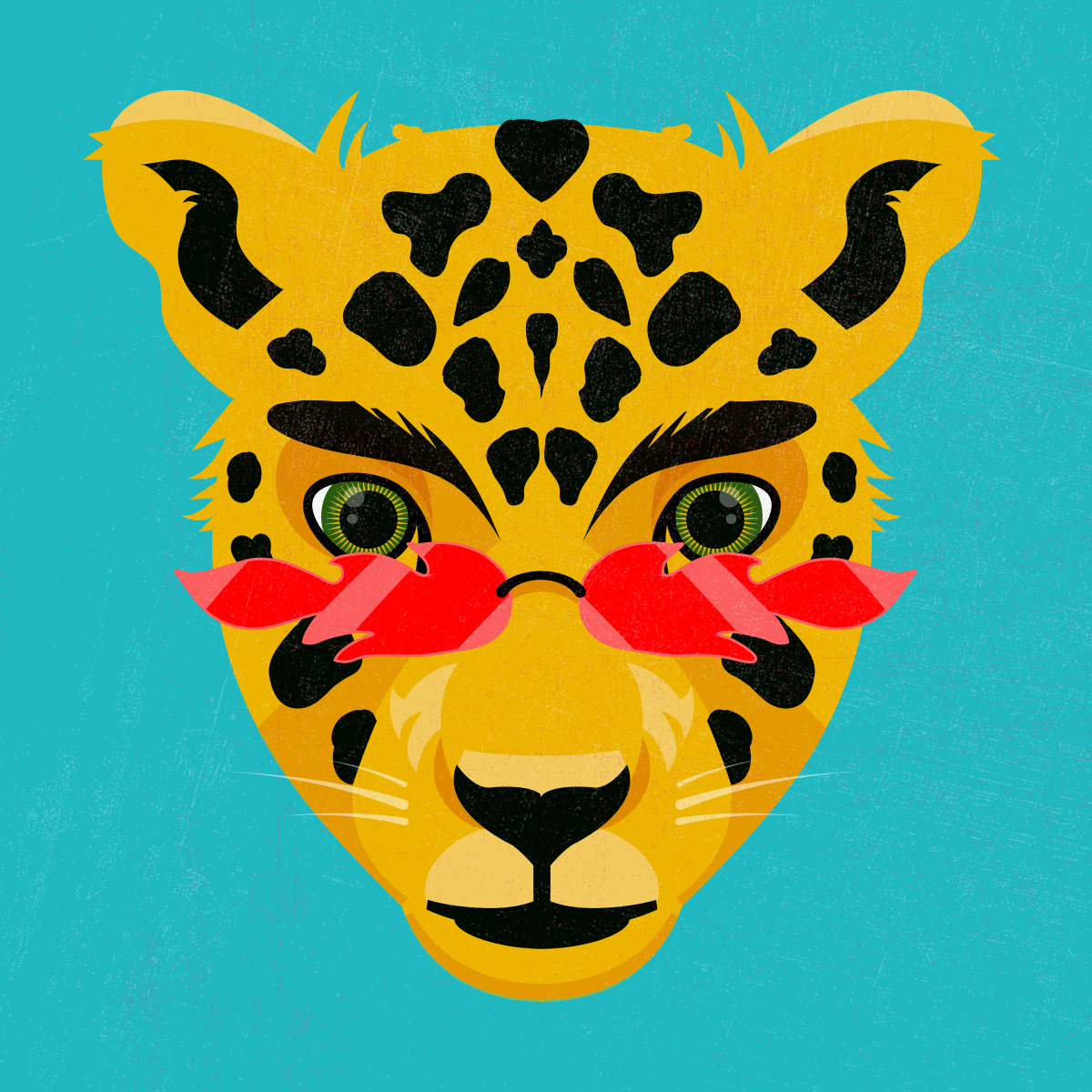 What is the main message you want people to get from Amazonia Exotic Meats and #StopGrillingAmazonia?

Brazil is famous for its meat, and in particular its “churrascarias,” known commonly as Brazilian steakhouses. The US and other countries that buy meat from Brazil might not be aware of the illegal fires that happen due to bad cattle practices in protected areas of the Amazon Rainforest. I want everyone to know what’s going on in Brazil and make people realize that we should #StopGrillingAmazonia. I’m Brazilian, but I have lived in the US for three years where the project “Amazonia Exotic Meat” took place, specifically in New York City.

"The US and other countries that buy meat from Brazil might not be aware of the illegal fires that happen due to bad cattle practices in protected areas of the Amazon Rainforest."

How can we help stop illegal Amazon forest fires and illegal cattle farms?

There are different solutions to this problem even for those who don’t live in Brazil, and I believe everyone should take care to protect the Amazon. Small changes in our diet to reduce or stop meat consumption is one of them. Checking where exactly a particular cut of meat comes from is another. While I conducted research for this project, I found that US regulations do not mandate supermarkets to specify the origin of the meat they sell. I believe people wouldn’t buy meat from Brazil if they knew there was a chance they were buying Amazonian cattle.

The current government in Brazil has made it easier for illegal events to happen in the Amazon, not only regarding cattle raising but also deforestation and the invasion of indigenous people’s territories. There are agreements between the US government and Brazil to cut financial support dedicated to preserving nature in these areas if severe actions are not taken to stop these problems. Even non-government organizations and celebrities like Leonardo DiCaprio have made donations to protect the Amazon Rainforest. The truth is, we need a president in Brazil that is willing to protect our lands and think of green solutions that will allow people to live in harmony with nature and the economy.

What are some other environmental causes that you are passionate about?

Climate change, deforestation, and animal rights are some of the other causes I often connect to. I try to take small actions to do my part by saving energy and water, recycling, slow shopping, and keeping myself informed. I also attempt to raise awareness and help conscientize the people around me.

In what ways do you value your membership at The One Club for Creativity?

The One Club For Creativity is a community I am proud to be part of. I visit the website almost daily to check for new and inspiring work, interviews, and workshops. It is truly a pleasure to share the same passion with creatives all over the world. I think it would be interesting to have small events in each city for creatives to meet in person and share recent work they have done or seen here. I also want to thank you for getting in touch and letting me share my work. I love this initiative and can not wait to keep reading more amazing stories and work!

"The One Club For Creativity is a community I am proud to be part of. I visit the website almost daily to check for new and inspiring work, interviews, and workshops."