Burger King Gets Its Swerve On

With The One Show 2019 and the ADC 98th Annual Awards now in the history books, it's time to launch a brand new season of Gold on Gold, our ongoing speaker series where we learn the stories behind some of our favorite Pencil and Cube-winning projects.

Our next Gold on Gold takes place tomorrow at The One Club Gallery, and will feature the work for a delicious combination of burgers and baked goods— FCB New York’s “Whopper Detour” for Burger King, and Jones Knowles Ritchie’s rebranding of Dunkin’ Donuts.

Yesterday we gave Dunkin' its due; today we're pleased to hear from FCB New York's CCO Ari Halper and ECD Gabriel Schmitt, who gave us the lowdown on the ever-so-subversive "Whopper Detour", which won four Gold Pencils and a Best of Discipline honor last month.

"Whopper Detour" isn't just a cool creative idea, but one that required a lot of technological know-how — and the confidence to tell the brand "let us blow up your mobile app." How did you know you had a winning idea on your hands, and how did you convince BK to let you do it? 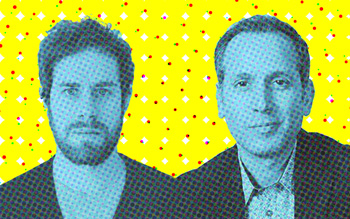 Gabriel: We knew we had a winning idea the second it was thrown out. Granted, originally it was a special off-menu burger. But still, the core of the idea, being able to order it only at McDonald’s, only through the app was the same. It was that butterflies-in-the-stomach kind of thing. "My god, this is massive! Now we just have to sell it."

Ari: If anyone knows, has met or even read anything by [Burger King Global CMO] Fernando Machado, you’d know that this wasn’t a very tough sell. Both he and [Global Head of Brand Marketing] Marcelo Pascoa instantly lit up at the idea. It was only a matter of “how the fuck do we pull this off?” And the only true convincing needed was with the franchisees to get onboard, since this was going to be done on a nationwide scale.

What was the biggest hurdle you had to overcome, in terms of bringing this to life? An "uh-oh" moment that sent you back to the drawing board, but all the better for it?

Gabriel: There are too many hurdles to count, the biggest being the legal concerns that McDonald’s would come after us. But there were technological and logistical challenges all over the place, including the one that changed the idea from a "special" Whopper to offering the traditional Whopper for just one cent.

ROI!? Yawn! Creatives don't care about that! Or do they? "Whopper Detour" had stratospheric numbers. How do you impart the importance of results that go beyond how many tweets or likes something received?

Ari: At FCB New York, we make sure creatives care every bit as much about results as they would want an account person to care about creative. After all, if it isn’t hitting the KPI, then it isn’t advertising, it’s just art, creativity for creativity's sake. And if that’s what you’re into, then go be a painter or a songwriter. Our job is to move products and services using creativity. So we don’t set out to win awards. We set out to do wildly successful work, that also happens to win awards. This is a healthier mindset for all involved. Especially clients, because they trust you more when they know you are thinking about what will actually drive business, not “what will win at the shows.”

"... if it isn’t hitting the KPI, then it isn’t advertising, it’s just art, creativity for creativity's sake. And if that’s what you’re into, then go be a painter or a songwriter."

Burger King is a unique brand in that they work with a lot of different agencies at the same time. Do you find yourselves trying to one-up the other agencies? Tell the truth, do you drop "Whopper Detour" and say "top that, so-and-so!"?

Gabriel: We would be lying if we said we weren’t competitive. But truth be told, we are mostly competitive with ourselves. Only wanting to up our own game and make a mark for the agency. To turn heads and put FCB New York back on the map creatively. That said, we did tell Fernando that we would never win him more awards than some of their agencies. But, that we could get him bigger business results and win awards at the same time. Which we see as being less competitive and more about what makes us different, how we roll. And how we wish more agencies rolled. The industry would be better for it.

What's your favorite item on the BK menu?

Gold On Gold takes place this Thursday, June 6 at the One Club for Creativity Gallery. 2019 Experiential & Immersive: Use of Technology