Doing What They Want

It seemed a natural fit that Damian Kulash—lead singer and guitarist for the innovative rock band OK Go, producer, director, artist and writer—would be named this year’s Jury Chair for One Show Entertainment.

Few people understand branded entertainment better than the 37-year-old LA resident. Since the now-famous treadmill video for “Here It Goes Again” debuted back in 2006, OK Go has enjoyed success both online and off with work that continues to push the boundaries between music, entertainment and commerce.

“Branded entertainment is a useful category in terms of thinking,” says Kulash, who was recently holed up in upstate New York with his band while working on their new album. “It’s a different mode of getting things out in the world, but at the end of the day, what we all want to do is just make stuff.”

And plenty of it. After their first music video became a YouTube sensation, more elaborate ones followed, like the standout “Do What You Want” video, in which the band is transformed into human wallpaper. As their popularity increased, the public wanted more, but in 2010 the band parted ways with their label, leaving them to finance their own projects. That same year, they released the video for “This Too Shall Pass,” which was their first foray into working with brands, in this case State Farm Insurance.

“For the most part, every advertiser is in the same boat. No one wakes up and says, my mission is brand creation,” explains Kulash. “It’s more like, my mission is to entertain people and make it a happier and more interesting place. Where branded entertainment fits into that is that you’ve always needed resources to make things, and there always used to be this wall between commercial and creative resources. If you were a musician, there was a record label that would do all the dirty work of logistics and financing. And you were supposed to live in a bubble, but they had all the control.”

Taking back creative control was the easy part, but figuring out how to handle the marketing and distribution of their music was not. Musicians who go it alone without the support of a major label can struggle for commercial success, but OK Go has figured out a way to bridge the gap by teaming up with brands.

Last year’s Gold Pencil-winning video for the song “Needing/Getting” is their most recent example of seamlessly integrating the band with corporate America. Chevrolet wanted to find an innovative way to show off the new Sonic, so they provided the money to create the video, which became yet another YouTube hit. A clip was also featured in a TV commercial during the Super Bowl, which led to even greater exposure, which in turn led to more interest in the band and their music.

Says Kulash, “The video that we did for ‘Needing/Getting’ that was also a Super Bowl ad for Chevy was something we wanted to do anyways, and it was going to use a car. So having the nuts and bolts of that actual project be part of it, so that the people who make the car helped fund the thing and distribute it and give it a platform it never would have had is not merely product placement…it’s a different way of making things.”

The frontman asserts that the reason the band turned to branded entertainment wasn’t purely for financial reasons, but also because of a fundamental shift in the distribution model.

“It’s not so much that the music industry dies and then we all have to start whoring ourselves to pay the bills,” he says. “That only works if you’re stuck in a narrow definition of what music and art are supposed to be. The 20th century set of definitions were defined by the distribution model that we had at the time—music was defined by a 12 inch piece of plastic and then eventually an optical disk. But recordings were not a commodity in the 19th century and music was a completely different thing. Once recording encapsulated the value of music, then there was this real trade in that commodity and the album was the artwork. But now that the delivery capsule has dissolved and is on the internet, it stops being about what you can do in that capsule and what you can do with ones and zeros.”

OK Go has learned quickly how to exploit the internet and use it to sell the band as well as brands. But inevitably, friction may arise when artists get involved with creative directors and clients who might have a different vision.

“We’re lucky that we started in this territory before there was a ton of Madison Avenue consultants who could advise you on viral success,” says Kulash. “This is a territory where we had a lot of creative elbow room because no one else was in it five or 10 years ago when we were just making shit in our backyard that our friends would like. Now we’re in a position where we might work with one of the world’s biggest ad agencies, or one of the biggest marketers, and luckily we can say, you hired us because you like what we make. At the end of the day, we all want to work together, but if we start making this the way you would make it, you’ll get what you were already going to make anyways.” By taking creative control over the branded content they produce, OK Go has essentially become its own ad agency. Kulash believes that while they are musicians first, in order to sustain their careers, they need to produce more than just music.

“We’re in the studio right now making an album, and we’re certainly not planning on not selling it. And it’s not like we make the traditional part of the music and think of it as somehow secondary or less important. It’s just that we look out at the next year or two and we’re thinking about how that is going to pay for the projects we want to make rather than thinking, we’re making this cool thing and gosh, I hope people buy it.”

“We all tend towards a stable mental model of the world, but I feel more likely that change is the constant right now,” adds Kulash. “Being able to make art for YouTube is important now, but there will be another platform in a few years or 10 years from now. And being able to figure out how to keep your bills paid through record sales or licensing or the right branded entertainment opportunities, those are able to co-exist and overlap in such a way that as one thing dies off, you’re figuring out another. That’s the Road Runner model we follow: Just f-ing keep running.” 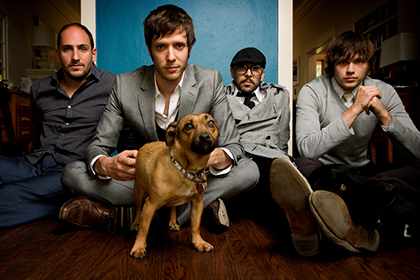