Gemma O'Brien: Apple of our iPad

Let's face it: if you're in the creative field, odds are pretty high that you're working on an Apple product. Whether you're sketching on an iPad, cranking out layouts on a MacBook, or saving your pennies for that beast of an iMac Pro due out later this year, the tech brand seems to be the weapon of choice for designers, art directors, animators and other professional creatives.

While most of us work on Apple products, not too many of us get a chance to work on Apple branding. And so when the opportunity arose, Australian letterer, illustrator, artist, Young Guns 13 winner and One Club for Creativity Member Gemma O'Brien brought her A-game — and her whimsical style — to the latest campaign for the new iPad Pro.

We had a chance to chat with Gemma about her contribution to the global campaign.

This is certainly a cool opportunity, considering how ubiquitous Apple is in the creative industry. How did this project come about?

Yes - that’s true and I was thrilled when I received the inquiry for this project with Apple. This job came along like most do, via an exciting email through my U.S agents earlier this year. Once we got started I realized I had met one of the art directors before, so perhaps that was a contributing factor in being commissioned for this project.

What was the brief like? Were you given set parameters, or did you have a lot of freedom?

The purpose of the campaign was to demonstrate the artistic capabilities and potential of the iPad Pro and Apple Pencil. Visually, the direction was to be centered around a graphic, pop aesthetic and my existing illustrative lettering style. The only parameters were that the artwork had to be created on the iPad (of course!) and that the words which featured in my piece needed to be short and instantly recognizable in different countries around the world. I’d started playing around with drawing apps on the iPad Pro a year earlier, so it was great to put these news skills to use for this campaign. I landed on using Photoshop Sketch to create the artwork. 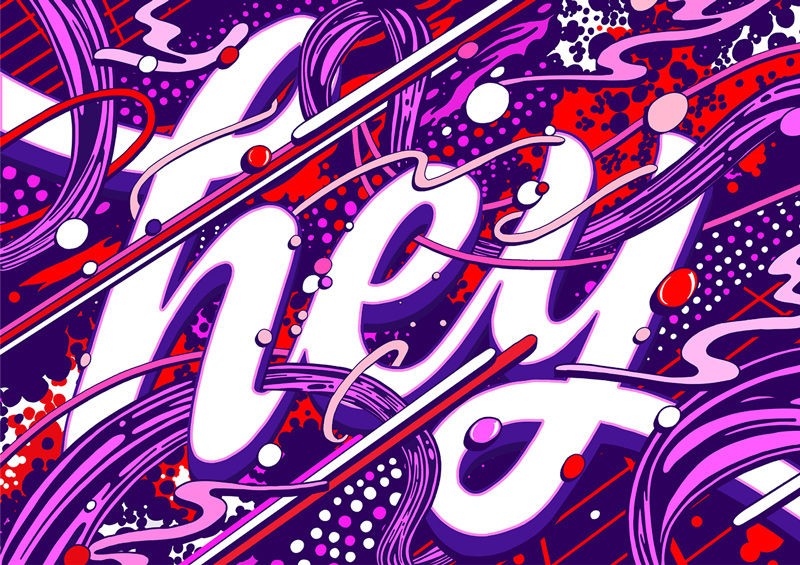 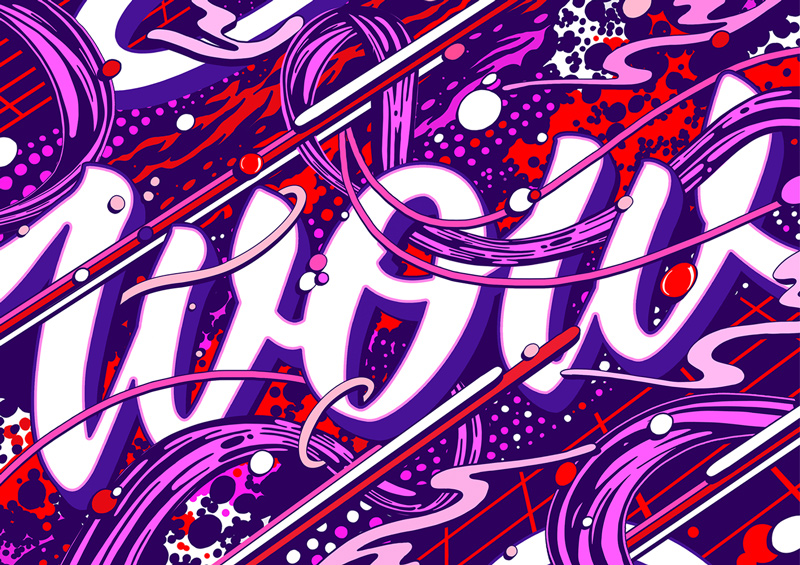 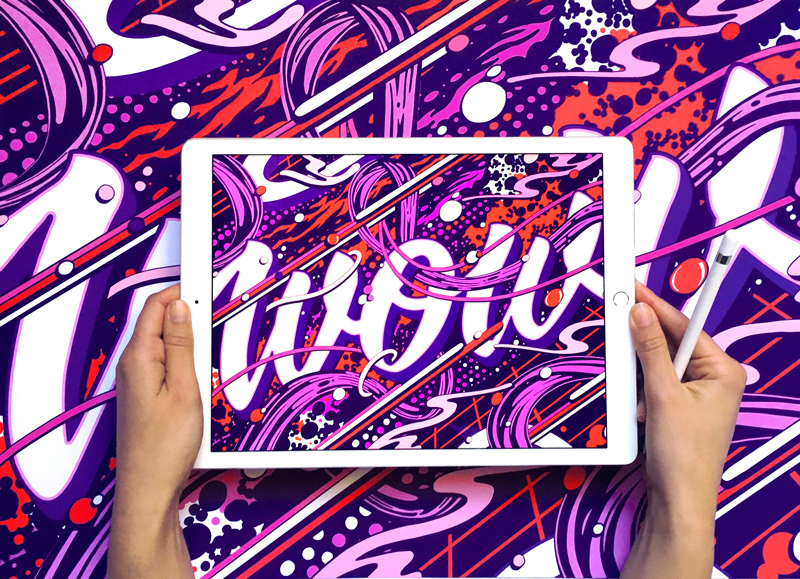 How did you land on what you eventually wanted to do?

It was definitely a collaborative process with the team at Apple. Some of my existing graphic style dictated the initial direction and we took it from there. We had a couple of rounds of rough sketches before moving onto the final art work. I was really happy with how it turned out. I was actually traveling for a lot of the project which made the necessity of working on a mobile device like the iPad perfect to finish the final art.

I always took you for a pen-and-ink kinda gal — How’d going digital work for you?

Yes, I’ve always been an analogue girl at heart, but I was pleasantly surprised when I started drawing with the Apple Pencil. For me it was a real gateway to working with colour, which has been hugely beneficial in pushing my skills further. I’ll still use traditional ink, brushes and paint in my design process, but the iPad has definitely become an integral part of my practice now.

What’s next for you, creatively speaking?

I’ve got some exciting projects coming up: I’ll be painting in Sweden as part of No Limit festival in September, speaking at Smashing Conference in Barcelona, and Adobe MAX in Las Vegas in October, and then I’m coming home for a solo exhibition at Lamington Drive gallery in Melbourne at the end of the year.

One Club for Creativity Members and Young Guns winners get featured here on the ADC  website and across our social media channels. Drop us a line at membernews@oneclub.org. Not yet a Member? Join today! 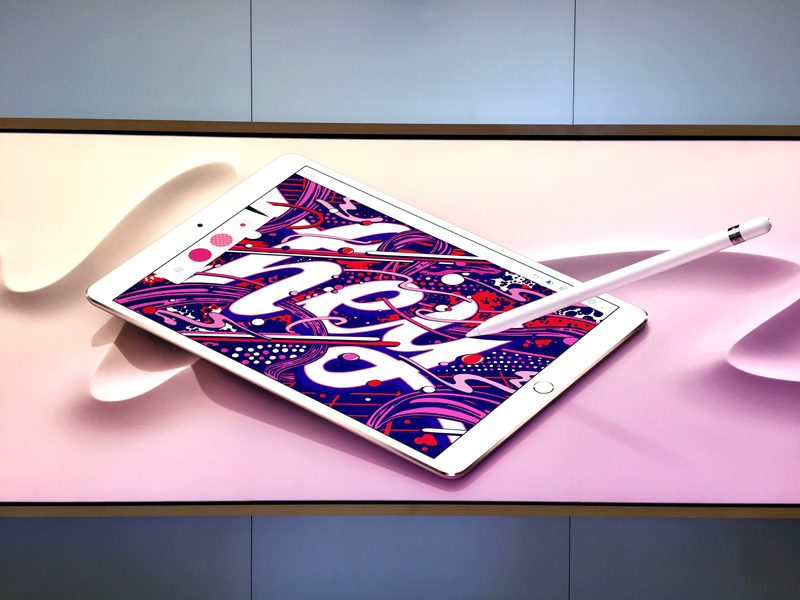 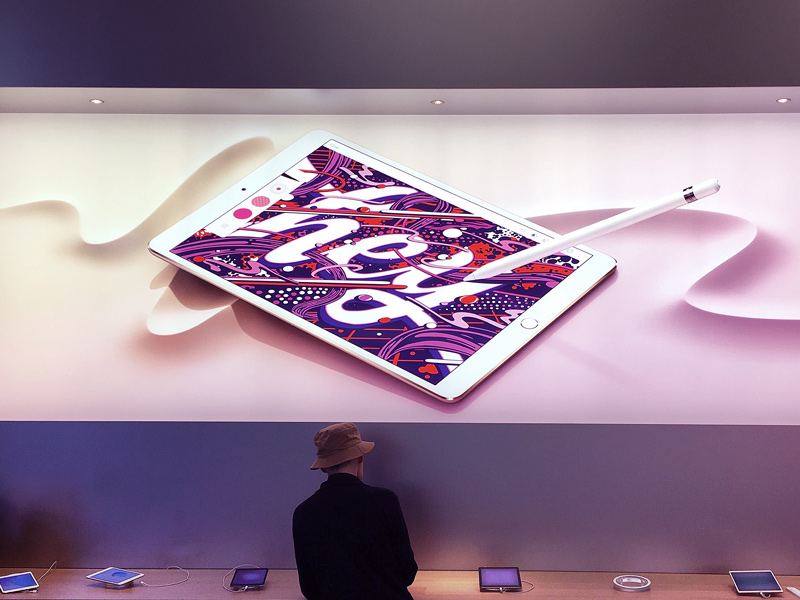