The artists are very small family set-ups with no formal training at all. They operate out of small kiosks needed to stock their material. Most of them have learnt it as children from their fathers in the growing up years. You’ll find their “studios” by the roadside around the trucking hubs on the outskirts of cities and towns.

Kaluram Meena is one such artist, a primary school dropout, who started painting vehicles way back in 1958. He lives in Jaipur. “I have been doing this for over 50 years now," says Kaluram. “If you queue up all the trucks I’ve painted, the line would extend from Delhi to Agra”, he chuckles. All his 5 sons have taken up this profession and the family now operates two studios.

Interestingly, the artist never shares or seeks approval on the design that would go up on the truck. No master is created on paper. The client just shares the name of his firm and his wish list for his truck. A small meeting follows… over a cup of tea right next to the truck, the artist shares his plan for the various surfaces. And then it’s action time.

The senior artist discusses the plan with his boys and they create some basic grids and guidelines on the surfaces. The roles are clearly chalked out. The chief takes up the most important and difficult parts while the younger artists take care of the peripheral areas and borders. As they shuffle around, many of them working on the same surface simultaneously, the team performs like an orchestra that has been playing together for years. And each one gets it right the first time. No erasing, no rework.

A big truck would usually have one master painting, at the back. The most popular subjects include idyllic village scenes with belles, cows, beautiful huts, ponds, et al, gods and goddesses, monuments, the Taj Mahal and a tiger or lion pouncing on a deer. The sides are dedicated primarily to “branding” with the owner’s firm name. Even more prominently displayed are the initials of the firm name in ornate, hand-created typefaces with shadows and bevels.

Flowers, leaves and floral patterns form the most visible graphics used to embellish smaller surfaces and borders. Religious symbols of Hindus, Muslims, Sikhs and Christians are also sported as graphics. Quietly tucked in somewhere you’d see a single black shoe used a blemish that is believed to ward off evil eye. Interestingly, renderings of the logo of Tata, the first Indian truck-maker (and one of India’s largest business groups) also feature prominently quite often. Of late, even Ferrari and Mercedes logos have become quite popular!

Tucked at the bottom and in all corners are short slogans that speak of patriotism, social issues and communal harmony. Wonder how dry and listless these highways, 3.3 million kilometers of them, would look without these hand-painted masterpieces. Kudos to these thousands of unknown, uncelebrated artists! 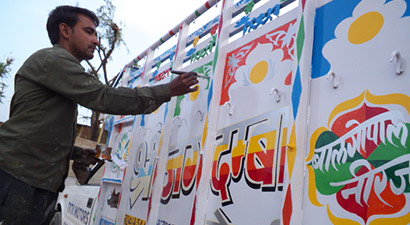 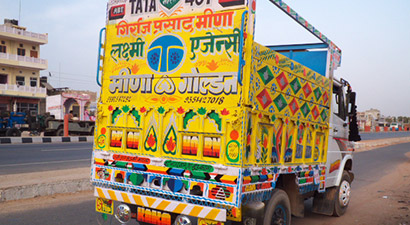 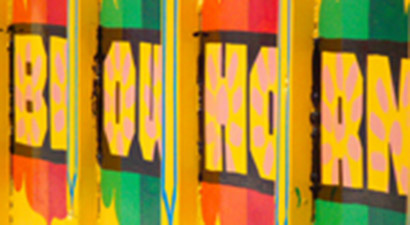