The first copywriter I ever hired was Jim Riswold.

Three months into the job I found him lying face up, under his desk. He was stone sober. “I don’t think I can stay here, Dan.”

“What? Riswold, you just got here.”

Jim had never lived away from home, having graduated just a year earlier from the University of Washington. I told him to get back in that chair and start writing. “Writing solves most everything,” I said. And man, was I ever right. Over the next 28 years, Riswold wrote like a god. He rattled the advertising world with revolutionary work for Honda scooters featuring Lou Reed, Miles Davis and Grace Jones. That work remains as fresh today as it was 25 years ago.

The list of clients who have benefited from Jim’s talent is long and deep. But all he wants to talk about these days is Nike. This company, this brand was his true calling, his passion, his ticket to the show.

And what a show it has been. I remember the morning that Jim and Bill Davenport, our producer, burst into my office unable to catch their breath or contain their enthusiasm for this film they saw the night before.

“...who left his shoes on while fuckin’,” shouted Riswold. “Wieden, they were Nikes! He wouldn’t take off his Nikes!”

The film was She’s Gotta Have It, written, directed by and starring Spike Lee. To our great joy, and his, I believe, Spike agreed to direct and co-star with Michael Jordan in a commercial Riswold wrote. And it blew up big time. There was true chemistry between “Spike and Mike,” and Riz gave it a voice. For nearly 15 episodes stretching over 16 years.

Not every copywriter makes a good creative director. But Jim found his own unique way to bring the best out in people. He did it via self-aggrandizement. It was a thinly disguised act that went something like this: “Dude, this work is shit. A waste of my time. Everything, except this little bit here. See that? Make that the focus and you’re on to something.”

Everybody knows he jokes around. Kinda. And it is that playfulness that borders on the not-so-playful that helps push the work into fresh spaces.

In August of 2000, however, it was Life that gave Jim a push. And Life wasn’t joking around. The diagnosis was leukemia. And his health has been on a teeter-totter ever since.

He was certain he was going to die. It was 2006 when things got worse, and he decided to retire from agency life and become an artist. He burst onto the scene with a photography exhibit that showed Hitler and his henchmen as a child’s dysfunctional doll collection. It was funny; it was uncomfortable; it was Jim at his bitter best.

The reviews were mixed. So Jim sat down and wrote an article for Esquire magazine titled “Hitler Saved My Life.” They printed it. And Life went on.

Kinda. The complications to his health have continued to ravage that now-frail body. I’ll spare you the details, which haven’t been pretty, but they haven’t stopped him.

For the last several years, Jim has been chief creative officer of W+K 12, an advertising school of sorts inside the walls of Wieden+Kennedy. He adores the students but tries not to let it show. They wouldn’t have it any other way.

Last year, Jim and his doctor, Brian Druker, spoke at a TEDx conference, giving both a scientific report on major advances toward a cure for leukemia and Jim’s insider assessment of what it is like to live for more than a decade with total uncertainty.

Jim summed up his talk with a simple black-and-white photo that spoke volumes. You can find the video on YouTube. He is standing, looking directly into the camera, holding an IV pole with the drip line entering his penis. 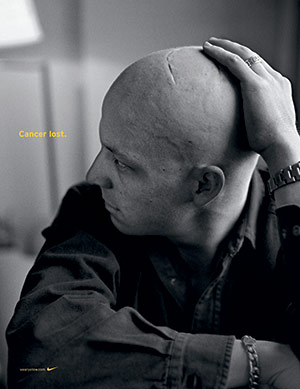