Advertising icon and 2005 One Club Creative Hall of Fame inductee Cliff Freeman passed away earlier this month at the age of 80. While his creative track record on brands such as Wendy's, Little Caesar's, Almond Joy, Staples, and Fox Sports are unparalleled in this industry, David & Goliath Founder and Creative Chairman David Angelo chooses to remember the man himself, a friend and boss who helped shape his own creative career in ways big and small.

We knew him as The Big Cheese. Not only because of the gold sign that hung above his office door. Or the amount of cheese he wrote about in his countless Little Caesar’s commercials. For those who knew and worked with Cliff Freeman, he was a much larger-than-life figure, a creative superhero who inspired everything and everyone who came in contact with him

I had the honor and privilege of working for and with him for nearly five years as one of his ECDs, not to mention his own personal art director. Those years played such an instrumental role in my personal and professional life and continue to serve as a standard moving forward.

His creative taste and sensibilities were undeniable. Of course, we all know him as the maestro of magic and the head honcho of humor. He shared his secret sauce with anyone who dared to push the work. For instance, if an actor’s performance wasn't funny enough, he suggested it would improve if they spoke with a little food in their mouth. It may not sound tasteful, but in the edit room, it was comedy gold. Or, if an old actor seemed too tired, he would have them shout their lines at the top of their lungs. My guess is that’s where the infamous “Where’s the Beef?” was born. I was witness to many of these amazing antics and I remember them as vividly today as when he first said them.


He pushed the work to the point of exhaustion. He would edit a 31.6-second commercial and then lexicon it to a :30. This enabled us to get all of the funny gags in while adhering to the allotted time. His bag of comedic tricks was endless.

He was the king of one-line zingers. Award-winning taglines such as “Pizza, Pizza,” “Where’s the Beef?,” and “Sometimes You Feel like a Nut,” to name a few, were legendary. In fact, he was also the voiceover for “Pizza, Pizza.” I remember calling him on Thanksgiving from my parents' house just so they could hear him recite the line.

And then there were his expressions — “If you don't get it. You ain’t got it.” A phrase he would say on a shoot to anyone questioning whether you need another take. In other words, cover everything, even if you don't think you need it. I’ve used this quote so often, even our clients can play it back. Another favorite — “That’s not funny. And I know funny.” And of course, he did. I’m pretty sure there are thousands more just like these.

He was a champion for the little guy and believed in challenging the conventions of the big and boring. And he did it quite successfully and repeatedly. Helping brands get beyond their fears and reach for the stars. His passion for helping small businesses was very well known. I remember a new business pitch where he literally jumped up on a boardroom table and enthusiastically read a script to a potential new client. Needless to say, we won the business.

He was no ordinary leader. In fact, he never even liked being called one. He was a creative, just like all of us, and the type of founder I had dreamed of working for and someday becoming. I had many conversations with him about this. I remember shooting a commercial with him in the desert and during a very quiet moment on set, he turned to me and said, “David, I don't like being an owner. I just want to be a copywriter.” And he meant it. But more importantly, he lived it.

"He was no ordinary leader. In fact, he never even liked being called one. He was a creative, just like all of us, and the type of founder I had dreamed of working for and someday becoming."

He was the type of person who loved being in the trenches. He loved the work, all aspects of it. He watched all the casting tapes and attended almost every single shoot. He would walk around the agency with his wooden baseball bat looking for anyone who had an idea worth sharing. In fact, he carried a small notepad with him everywhere he went. His scribbles were gems of genius — big ideas, taglines, you name it. He made everyone better. And we all knew we were in the presence of a legend. One who could lift us, and the work, to a whole other level.

He created an environment that didn’t feel like an agency per se. It was a museum of inspiration. From the countless industry awards on display in the agency lobby that continued down a long hallway, to the hundreds of vintage cookie jars that decorated the walls, to the commercial props, to the leather baseball glove chair (my favorite), this place made you feel like home. Home to some of the most talented people on earth. And then there was his office, furnished with an old barber chair where Cliff presided, while you presented your work and hoped he laughed. Everywhere you looked in his office, was a spark of inspiration. Whether it was the vintage radios, the chattering teeth, or the mounds of papers and baseballs on his desk, you couldn't help but feel you were in someplace magical. The home that Cliff built. 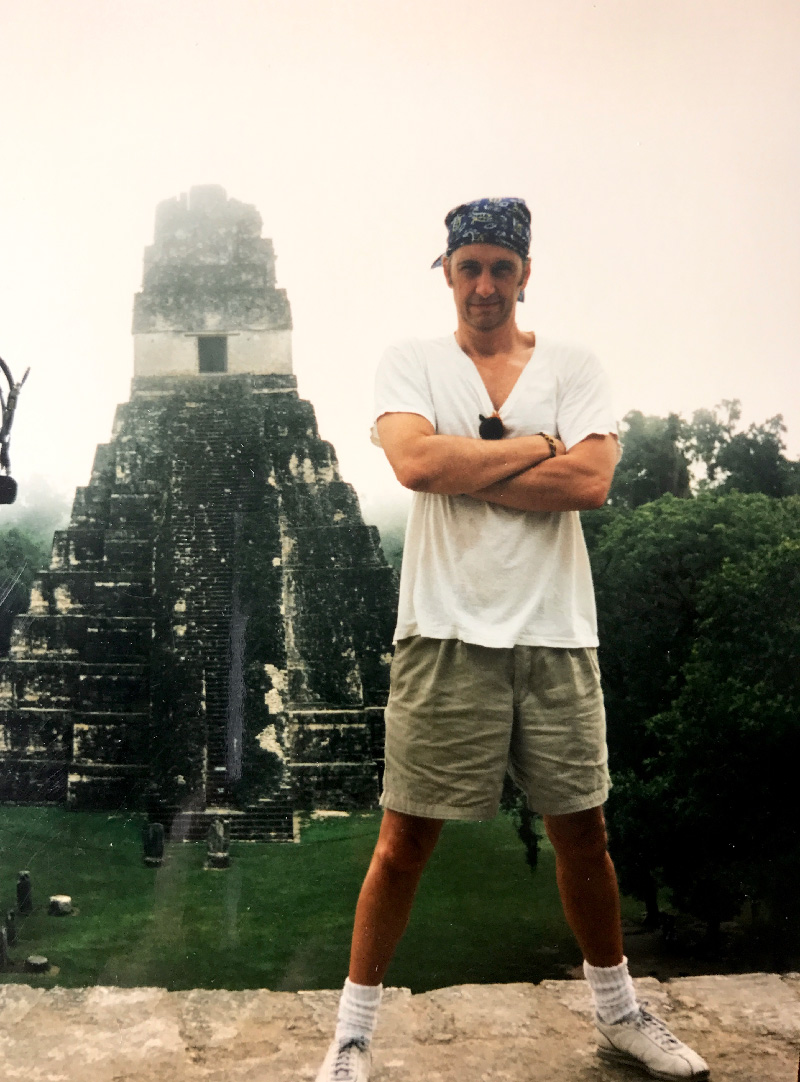 I also had the opportunity to travel the world with Cliff. We wrote and shot commercials in several different countries. From shooting a Super Bowl spot in Montana to producing a global campaign on the sacred temples of Tikal in Guatemala (as seen in the photo above), to the ancient ruins of Rome. It was there in Rome that he, and his wife Susan, provided a little “creative direction” in picking out my wife’s engagement ring. He told me, “Yes, David. You can afford this.”

He impacted so many people. Individuals who took their amazing experience and went on to become directors, to lead other agencies, or create their own.

He had an amazing effect on me and my life. And the agency I created 22 years ago. His inspiration lives on in me and the people I impact.

I’m not alone in saying this: I wouldn't be where I am today without Cliff Freeman.

The man. The myth. The legend. The Big, Big Cheese.

In the words of Rasheed Ogunlaru, “Legacy is not what’s left tomorrow when you’re gone. It’s what you give, create, impact, and contribute today while you’re here that then happens to live on.”

On behalf of all of us, Thank you, Cliff.