Mara Lecocq Swims With The Fishes

Past NCL winner makes industry changes for the better at Fishbowl.

For the past several years, The One Club for Creativity and the 3% Movement have partnered to present Next Creative Leaders, a showcase of women in the advertising industry who not only are creative superstars, but have also demonstrated a keen ability to grab the reins and take control, making a positive difference in this crazy, beautiful profession.

The 2019 Next Creative Leaders winners were honored last month at the 3% Conference in Chicago, and last week we played host to Power POVs from Next Creative Leaders, a panel discussion with three of this year's winners, as well as three additional winners from previous years. Among that latter group was Mara Lecocq, 2016 honoree. When we last checked with Mara, she was on an entrepreneurial high, riding the waves of her Secret Code successes. Fast forward to today, and she's taken on a new role as Brand & Community Director at Fishbowl.

We caught up with Mara to dish about the fish, and chart her career path since winning Next Creative Leaders.

First of all, congratulations on becoming Brand & Community Director at Fishbowl — making moves as always! For the uninitiated, tell us what Fishbowl is about.

Fishbowl is a chat app for professionals of the same industry to have honest conversations about work. What’s powerful is that you can choose to post as your name, job title, OR company, but not at the same time—so it makes you feel safe to ask real, honest questions you could be embarrassed asking IRL (like, “This is how much I’m making. Is this normal?”), while giving enough context of where you’re coming from. Our mission is to move careers and industries forward with productive conversations. We’re open to advertising, management consulting, finance, law, accounting, and teachers. 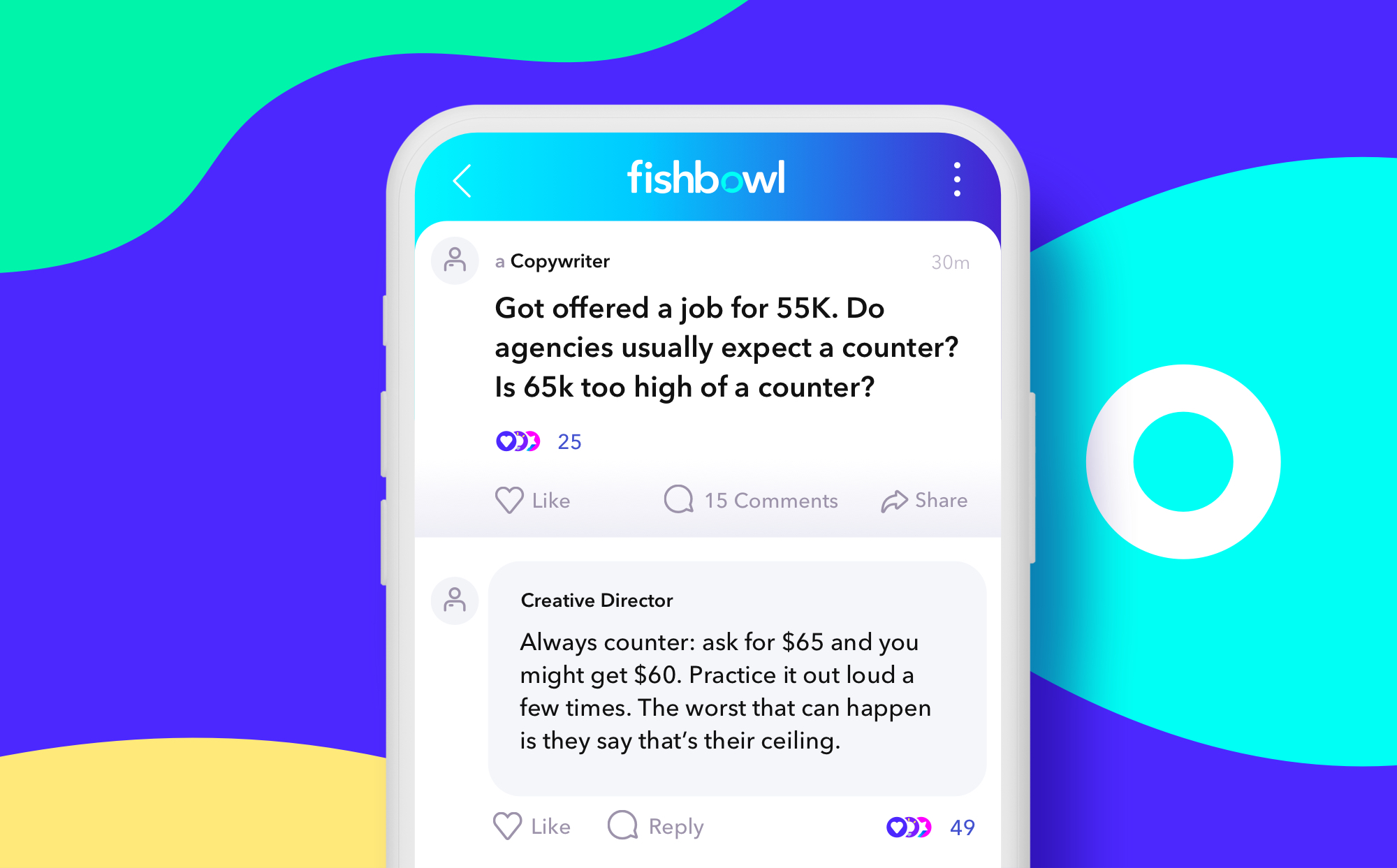 Before that, I was an ad agency creative director working at AKQA, BETC Paris, 72andSunny/Sundae. I discovered Fishbowl around the end of 2017. I was addicted to the honesty of the platform. In a world where we’re constantly trying to “build our personal brand” and brag about our accomplishments (and I get it, we also need it for business opportunities — not throwing shade at a necessary evil), I was addicted to the absence of BS and ego on Fishbowl. I was addicted to getting support to my challenges by anonymous angels who didn’t want credit for it — how beautiful — and addicted to paying it forward without receiving that credit either. Every night, I was like “Who’s someone I can help quick before going to sleep?” I loved feeling like someone’s 2.0 guardian angel.

What made you decide to join the Fishbowl team in-house?

On the Women In Advertising 'bowl' — that's what the various sections of the platform are called — I kept noticing the same question and testimonial come up: “I feel misunderstood and underrepresented at my all-male agency. Are there any female-led agencies out there?” I decided to post an open-access Google Sheet in which women could add their female bosses on Fishbowl, and it blew up from there. Soon after it turned into Where Are The Boss Ladies, the largest database for senior women leaders in advertising with the goal of providing women with role models to work for. It’s being used by companies like Netflix, R/GA, Apple and Disney. Fishbowl is also how I found my co-founder Christina Jones.

Where Are The Boss Ladies?

As I was freelancing, I got to know the Fishbowl team and helped them out with the ad community. I just loved their mission, and them as human beings. I realized the power the platform had to have an impact on people’s careers at scale — across all genders, ethnicities, levels and industries. This challenge deeply resonated, and excited me. At the end of 2018, I asked the COO if they would consider having me join them.

What has been one of the more fascinating things about seeing the industry through the lens of Fishbowl?

What’s been surprising is to realize industries have distinct personalities and cultures. We have a bird’s eye view of conversations across advertising, consulting, accountants, teachers, and lawyers, and I realized I was a walking advertising creative stereotype. We have this fascinating document, an industry tones brief, which helps our moderators understand industry personalities so they know what is considered on/off-topic, funny or offensive. It’s kind of like reading a horoscope but instead of Leos and Pisces it’s “Advertisers” and “Consultants.” It is hilarious to see how they describe advertisers in an innocent and thoughtful way. Here’s an example: “One thing to keep in mind about the advertising industry, that is particularly unique to this community, is the fact that senior leadership at many of these agencies have branded themselves as thought leaders or social media influencers.” Sorry, we mean well! (laughs)

It’s a very humbling experience to understand what other industries go through too. All industries are going through shit. And Fishbowl is helping them sort it out, which is incredibly fulfilling. The last surprise is that the industries that have the most advantages are the most cynical, while the one that has the least (teachers) remain positive and optimistic. Sometimes I’m like, “We’re just a bunch of brats.” We’re currently working on showing what other industries are talking about so people can appreciate what they have, and learn from each other.

Fishbowl is a place that many important and unvarnished conversations about the industry take place — conversations that you’ve been pushing for though Where Are the Boss Ladies. How is gender equality being discussed by people in the trenches (not necessarily the industry movers and shakers) especially when there is a level of anonymity?

The Women In Advertising bowl has often been described as a “warm hug.” It’s an incredibly supportive community of women going through challenges, with thoughtful yet honest responses. Right now it’s only accessible to women, which is an internal debate with the team. It’s a safe space for women only, but I personally see the benefit of having men read and learn from these women. I was in a big debate with one of my coworkers, and he finished saying, “Well, maybe it’s my white male privilege that’s making me see things this way.” I was like, bravo! That only happens when you listen to women’s conversations and learn from them. I think women talking about how to fit in a man’s world can only go so far. Men need to play an active role in it. Now.

For gender issues in the workplace, Fishbowl helps women realize that what we’re feeling is absolutely normal. It helps us feel validated, and find solutions to overcome our challenges. I realize I end up moving on from issues I usually obsess about when I know they are shared by many. It’s like, “Oh, it’s no big deal. This is how you solve it. Ok next.”

Fishbowl has teamed with the 3% Movement to launch “Pledge For Pay Equity”. Tell us more about this initiative, and how it has been going thus far.

The 3% Movement had been working on an amazing initiative: having agencies pledge for pay equity. Since 40% of advertisers from the biggest agencies spend on average 15 minutes a day on Fishbowl, this is a prime spot to celebrate agencies that are making positive change. What we did was highlight those agencies on the company profiles page, so women can focus their job search efforts and see at a glance which agencies care about pay equity. It’s really tough to implement, and these agencies widely deserve the attention for going that extra mile to treat us fairly.

Speaking of the 3% Movement, you spoke from the Grand Ballroom at the 3% Conference earlier this month. What was "Bonds of Fire" about? How'd it go?

I’ve been quite the conference junkie the past few years — as both audience attendee and speaker. I was feeling people were getting conference fatigue for being told accomplishments of amazing people all day. It ends up being quite a passive experience. Where’s the authenticity? Interactivity? Meaningful connections? Adrenaline? I wanted to do the opposite. I wanted to get real, real fast, and make it all about the audience. I was inspired by a cathartic post on Fishbowl where people poured their hearts sharing their weaknesses to each other. I wanted to bring that Fishbowl experience in real life. “Bonds of Fire” was an interactive IRL experience where we celebrated our weaknesses. 1,000 people shared their main weakness with strangers they were sitting next to. There were tears. There were deep conversations. And there were new friends. All things that I love. 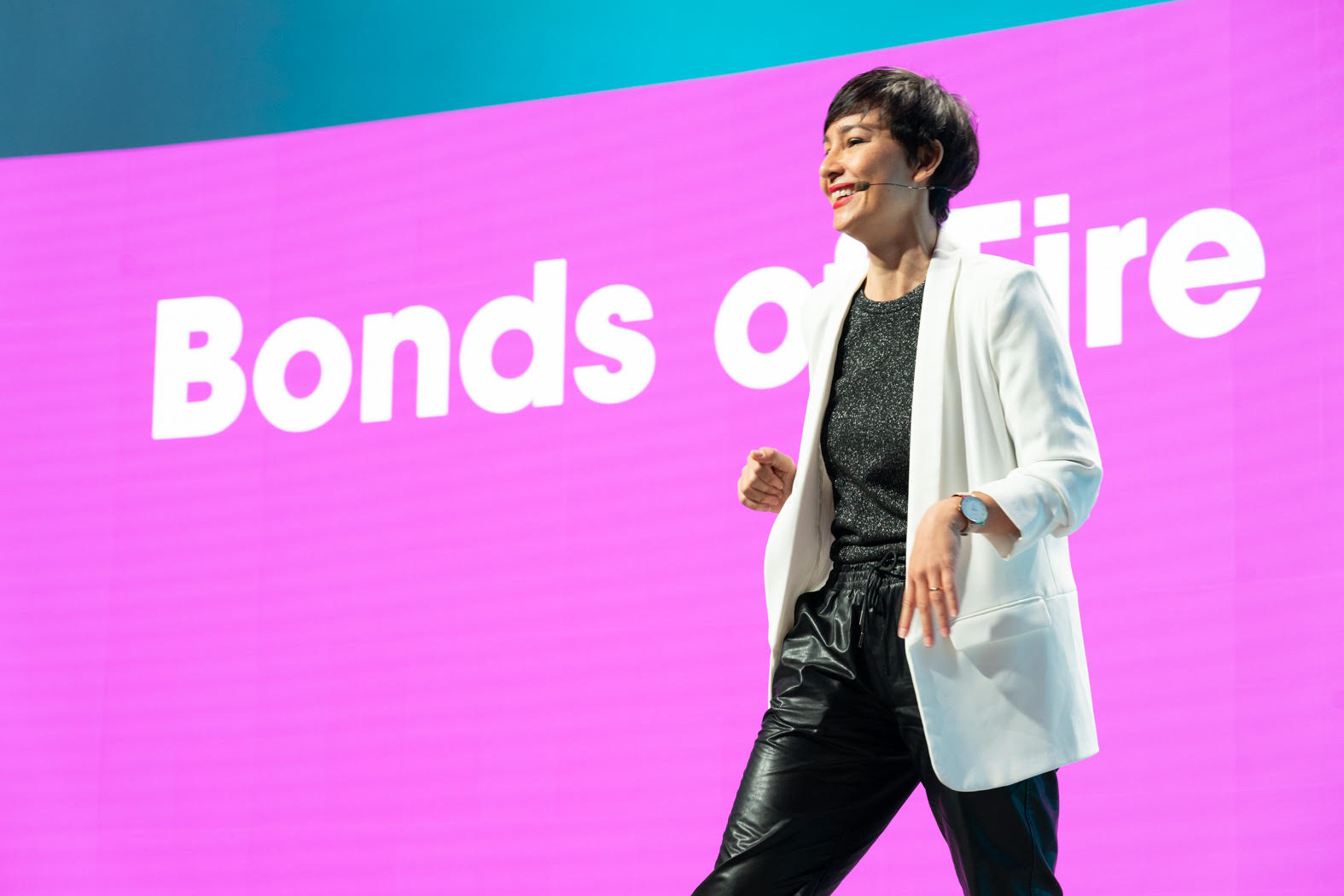 Mara speaking at the 3% Conference in November

The 3% Conference has always had incredible and thoughtful programming. In Chicago it’s taken to the next level because it’s such a beautiful venue and in a place I feel a tourist in. Which is always fun.

Later this week you’ll be among our panelists for Power POV, which brings together Next Creative Leaders winners to share their stories and experiences in building a more equitable industry. As a past winner, describe the trajectory of your career since winning in one word.

It’s been three years already! Reid Hoffman describes career trajectories as more of a jungle gym than a ladder. I’ve definitely been on a jungle gym. Part of the reasons I won Next Creative Leaders was because of my project Secret Code, the customizable children’s book that stars *your* little girl as a tech hero. It changed my path from creative director to entrepreneur. I won the Girlboss Foundation grant, a spot at the Project Entrepreneur accelerator program by the Rent The Runway Foundation. I was legit seen as a rising entrepreneur, which was weird to switch hats suddenly. I signed with WME, the talent agency that represents Oprah and Karlie Kloss. Like, wutt. 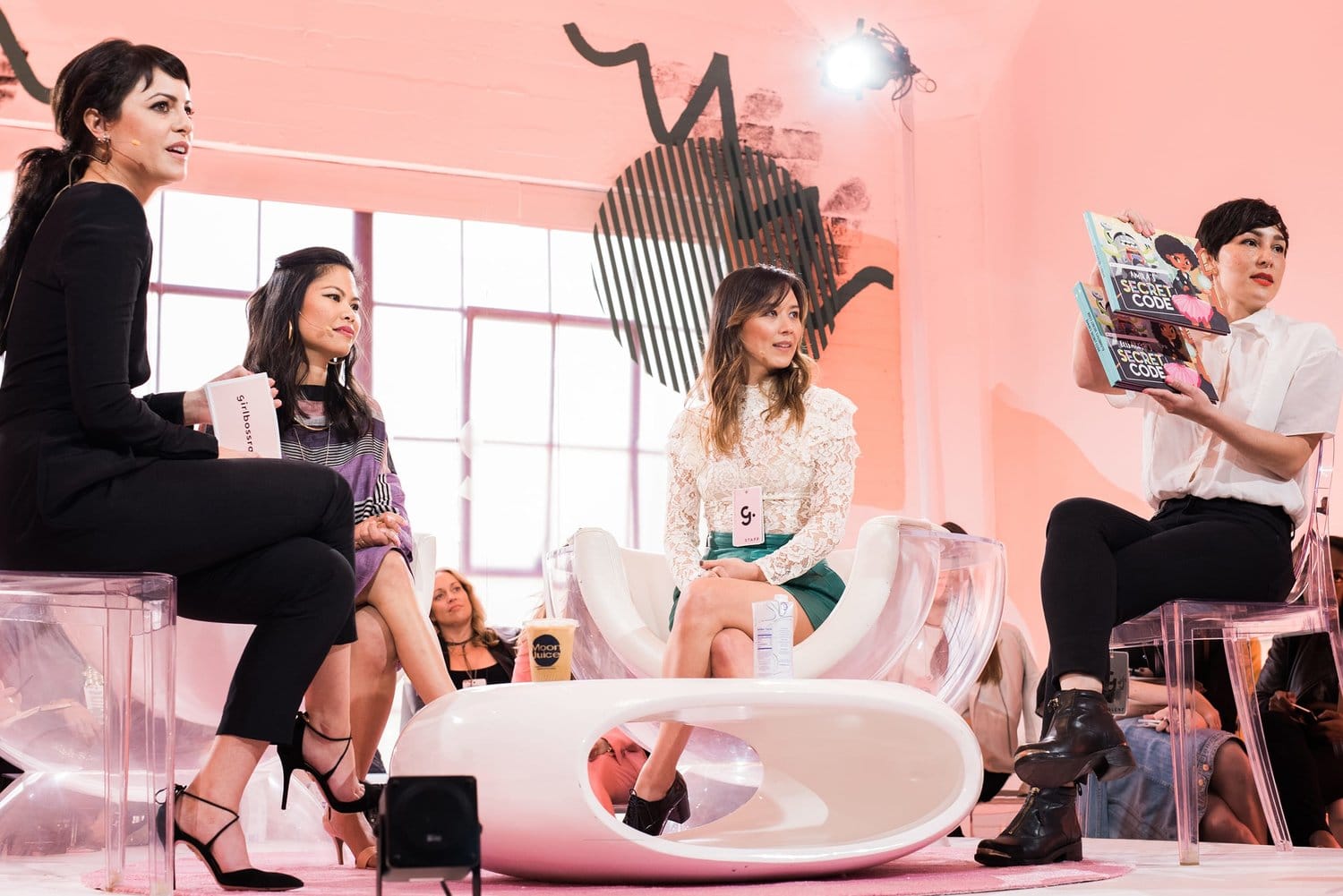 Then I launched Where Are The Boss Ladies as I was still freelancing in advertising (or as we say, being your own angel investor). By the end of 2018, I was going full speed on the Secret Code highway. And then I hit the brakes. I asked myself, “Is this...what I really want?” I was a lonely workaholic, I was running out of money, I made no time for my partner and personal relationships, and I wasn’t sure if becoming a children’s media mogul was really what I wanted. It was a really painful time. When you spend so much time telling everyone your plans of conquering the world, your ego clouds your judgment and you end up being afraid of losing face. And I was like, “Fuck it. No one cares. You do you.” And I did. I wanted to be around adult stuff. Where Are The Boss Ladies felt closer to who I was, and I had a growing love for Fishbowl, which allowed me to help professionals of all backgrounds—not just women. I could help the LGBTQ. Black men. Asian men. Introverts. That felt more like me.

Every experience is a stepping stone to your future. There are no bad decisions, no regrets. Enjoy every moment that builds your future you! 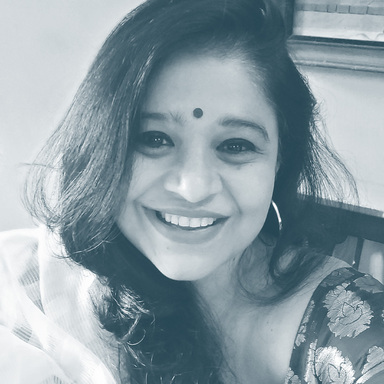