One Club Member chats about penning an industry book

Mark Pollard, One Club Member, Strategy CEO at Mighty Jungle, and podcast host has made it very clear that he does not want his brand new Kickstarter-powered book "Strategy Is Your Words," to sit on a shelf in someone's office and collect dust over the years. He wants people in our industry to be reading, using, and interacting with it daily.

Mark had a lot to say about his new book, so we will be fully equipped to start reading as soon as we purchase a copy and it arrives at our door.

When did the idea strike you for writing "Strategy Is Your Words"? 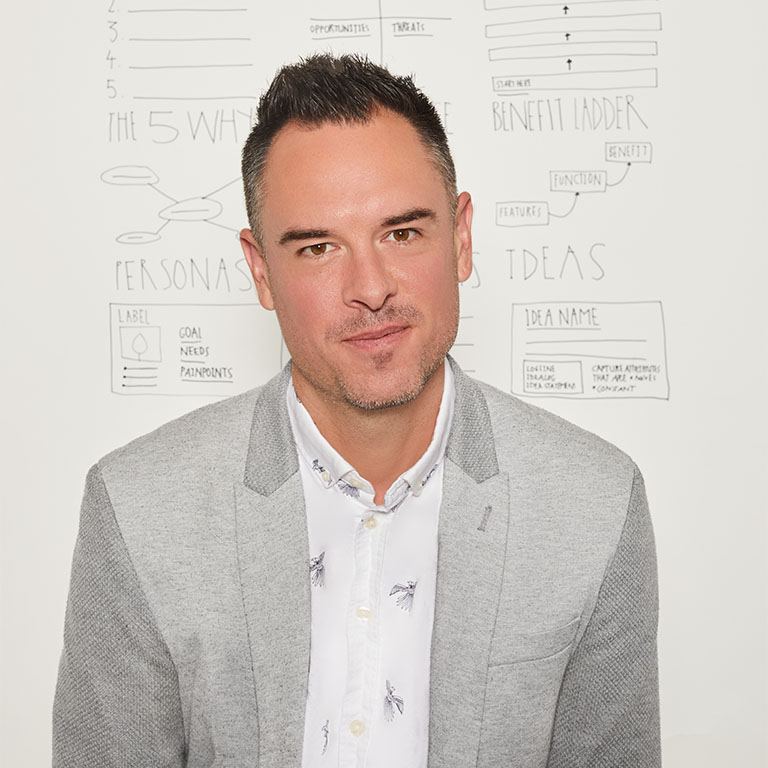 The urge to write this book grew in me for a few years but it was the summer of 2018 when I decided to make it happen. I had taught a lot of the material that's in the book for several years and I was comfortable with the concepts — they were road-tested. I wanted to write something deeper and I managed to connect to this depth by doing three things: I practiced morning pages while going through a lot of Julia Cameron's "The Artist's Way," I read Viktor Frankl's "Man's Search for Meaning," which documents Frankl's observations of German concentration camps, and I ended summer in Dublin.

In Dublin, I visited the Dublin Writer's Museum. It's a humble building and the audio tour only took thirty minutes, but it put me in the lives and letters of writers I respected but, having grown up in Australia, were distant to me. The conviction I felt in their letters– especially James Joyce and W.B. Yeats, made me realize that if I wanted to live more like an artist and to write, I needed to return to New York and build my life around writing.

So, I went back to New York, canceled my co-working space membership and decided to write most workdays of the week. I had a mental block about how to write it though — on paper with a pen or on a laptop? I had to force myself to sit down in front of a laptop, open Google Docs, and then I wrote the title ("Strategy Is Your Words"), added the subtitle ("A Strategist's Fight For Meaning"), and my name and thought, "okay. We have started the book."

"I had to force myself to sit down in front of a laptop, open Google Docs, and then I wrote the title ('Strategy Is Your Words'), added the subtitle ('A Strategist's Fight For Meaning'), and my name and thought, 'okay. We have started the book.'"

Then I wrote a list of words I hear strategists use, words such as "lone wolf," "impostor syndrome," and "clarity," and treated each word as a daily brief. Writing about these words took a couple of months and makes up half of the book. The second half of the book focuses on my survival techniques for doing strategy, things I've taught and written about for years but, this time, I wanted to really write about it. And to do so, I treated the book as more of an art project than a business book. It took a month to get through this section.

When you think of the word “words” what pops into your mind first?

My life. I'm building a life around words. I used to publish a hip hop magazine, I've done radio, and now I host the Sweathead podcast and Facebook group and it's all about words. “Words” was too simple for me to see in such an important way when I was young. Now, "words" and "writing" are my life and I see the words in an electric way.

What is the most unique feature of this book?

I don't think it's enough to teach templates and frameworks without helping people learn about themselves and their own psychology as well as the cultures they work in. I can show someone a creative brief template, tell them some principles, and write a few words with them, but it doesn't mean they'll be good at it. People are infatuated with shortcuts.

"I don't think it's enough to teach templates and frameworks without helping people learn about themselves and their own psychology as well as the cultures they work in."

So what's unique about this book is the combination of how it's utterly practical, but I get into absurdism and philosophy in a way where people will think the book is reading them– not the other way around.

I've been in this industry since I was 19, and I've worked in digital, brand, PR, both in Australia and the USA, and I was often the youngest person in a management team. So I've seen a lot of situations up close. A lot of people coming up in the industry think their experiences are isolated — “It's just me.” This book will teach them it's not just them and it will teach them the basic concepts of the industry and how to use them– something I don't think the majority of people in the industry are fluent in today.

You have called this  "A Desk Book" what does this term mean to you?

I talk a lot about lateral thinking. To call this book "a desk book" is silly, but it's a lateral thought and a lateral thought is an idea. And, like all ideas, it's suggestive, and I want this book to appear on people's desks. I want them to smell it, touch it, see it, and use it together. It's not a shelf-book. I don't want it to gather dust. That's not good for any of us.

"I want them to smell it, touch it, see it, and use it together. It's not a shelf-book. I don't want it to gather dust. That's not good for any of us."

In your mind, does this book have a specific target audience?

I merge the practical with the absurd and candid, so most of my material resonates with empaths capable of introspection, abstract thought, and who often feel their brains are their own worst enemies. These are my people.

Someone wanting concrete shortcuts won't get this book. They're not wired for it.

"I merge the practical with the absurd and candid, so most of my material resonates with empaths capable of introspection, abstract thought, and who often feel their brains are their own worst enemies."

So if we are about to pick up this book and start reading it right now, what are a few pointers that you would want us to be conscious of when we begin?

The main pointer is to read it as a piece of art and to understand that, for all its ferocity, it comes from a place of love. Nothing in the book is dogma. Take what's useful and move on. Then go make some of your own art.

Why did you decide to produce your book via Kickstarter?

Kickstarter rejected a book proposal from me about ten years ago. I think they're not big fans of advertising and marketing projects, really. So I have wanted to do something on there for a decade. Making a Kickstarter work is complicated because there are so many ways for it not to work, and for you to lose money. But I thought it would be a fun place for the community I'm in to come together and see if they'd want to support the weird stuff I do.

I wanted to raise $15,000. That would have been enough to print a couple of thousand books the way I wanted to print them. We nearly reached $40,000 and that was from a couple of emails and social media posts. I really didn't want to spam people.

Kickstarter featured it in a small way, but most sales came from my own community. This is something a lot of people hope Kickstarter will do for them — get them in front of a lot of new people. But, often, you have to bring the people to them, although it would depend on what you're selling.

What has the feedback you've received so far been like?

For the first week after I'd sent it out, I just saw photos of the unwrapping, of the "arrival," and I started to wonder if anyone was reading it. Our industry is competitive and I don't think people find it easy to support each other in public so, when I see it, I appreciate it.

Often people will share quotes or some of the lists and definitions from the book. They'll say they feel "seen" or "attacked," but "attacked in a good way." People seem to enjoy the design, printing, and how it feels– it's a solid book. People have talked about laughing out loud while feeling reminded of how mindless our work culture can be, and this is all good because I wrote it to stir people and to challenge them to live and work with more intention.

Are you thinking about writing another book?

You bet. I've spent a lot of time thinking about life in the past few years. To do this, I often think about death. Having dealt with a lot of depression over the years, I believe I'm better when I set myself up for big and strange creative challenges. I feel more alive and less like death. My main question now is whether the next project will be fiction or non-fiction.

I'm trying to see myself increasingly as an artist. This means that it's important to continue to create.

BUY "STRATEGY IS YOUR WORDS" HERE 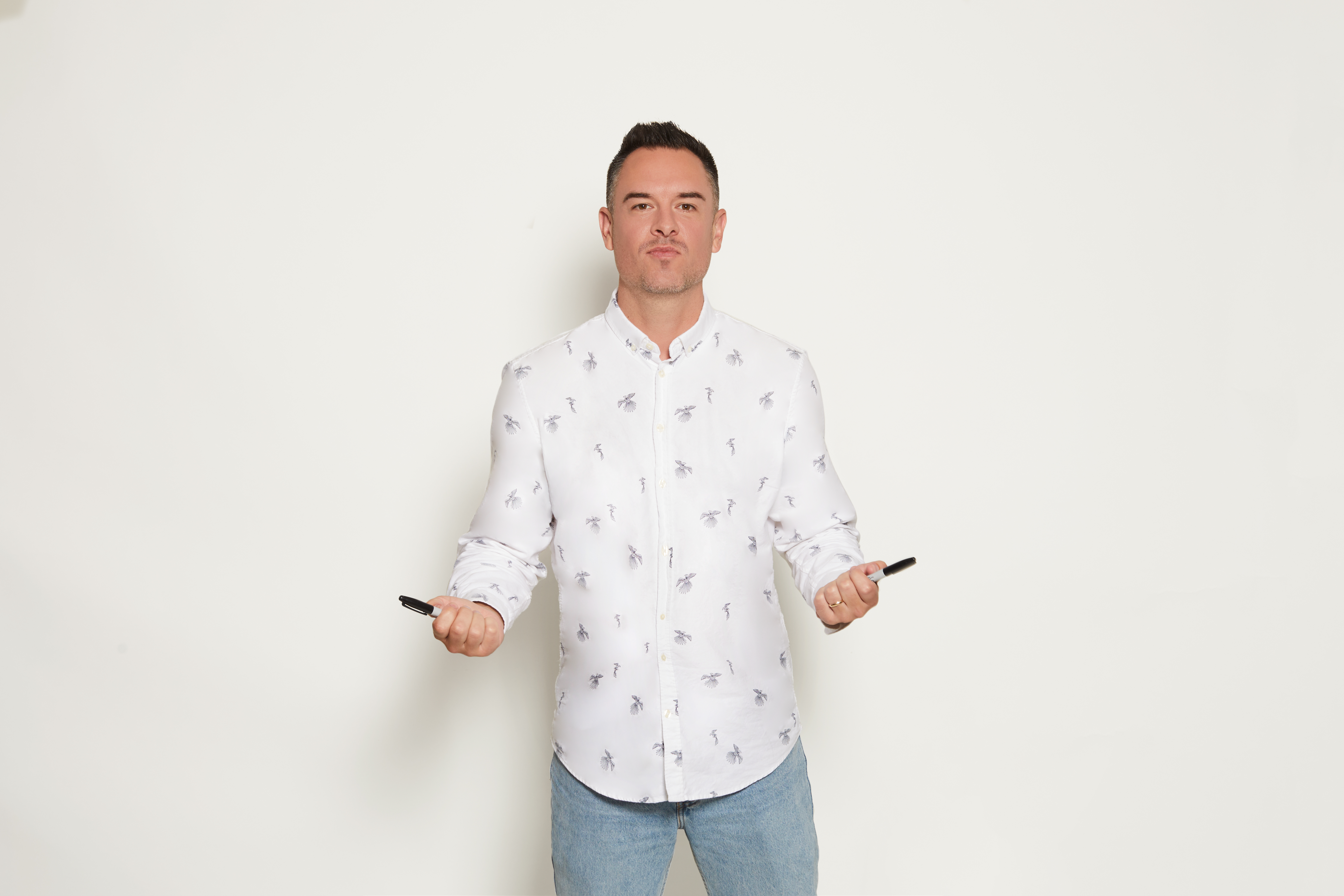 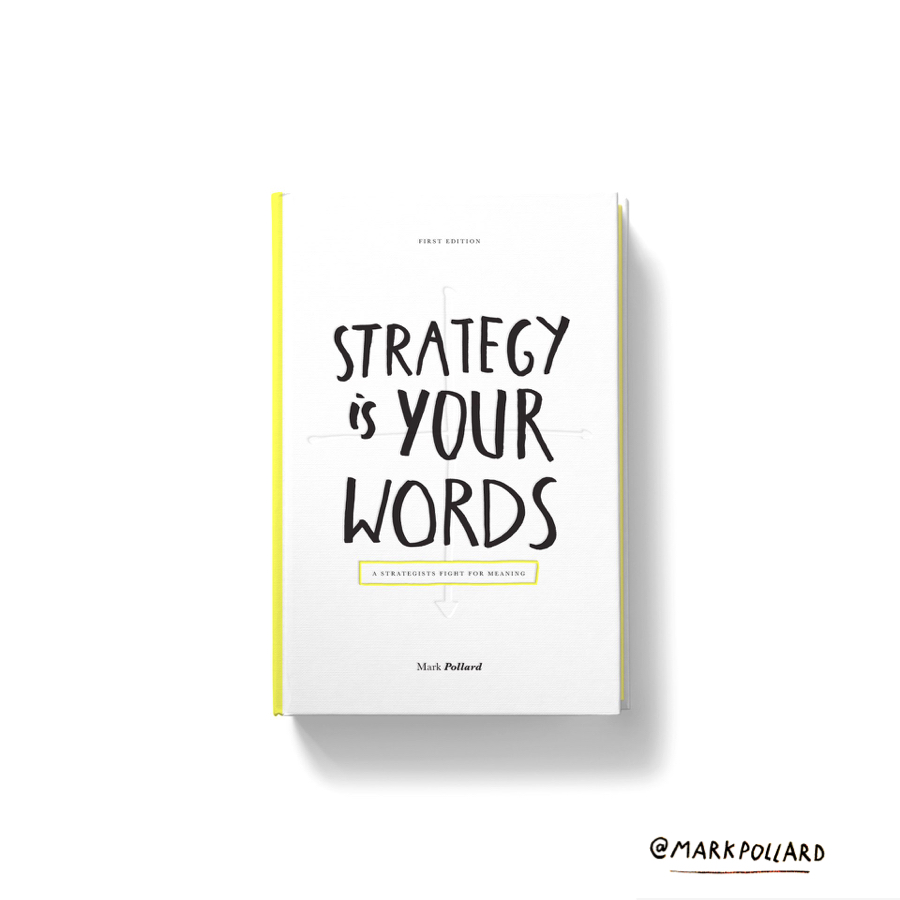 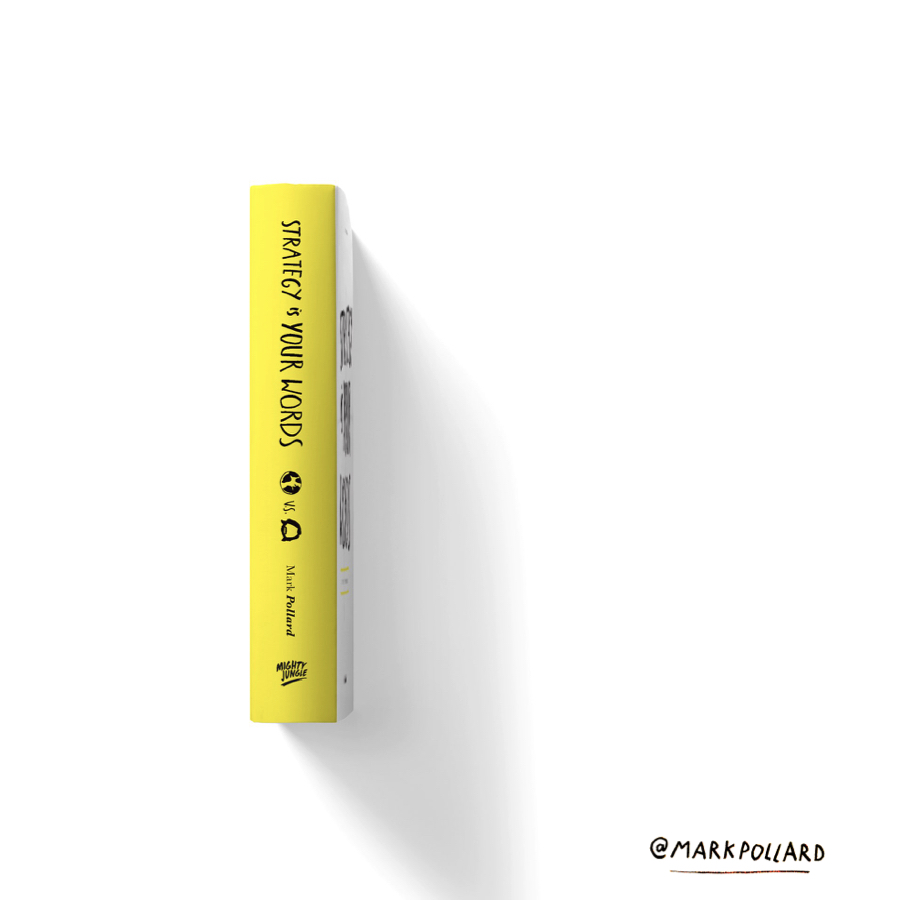 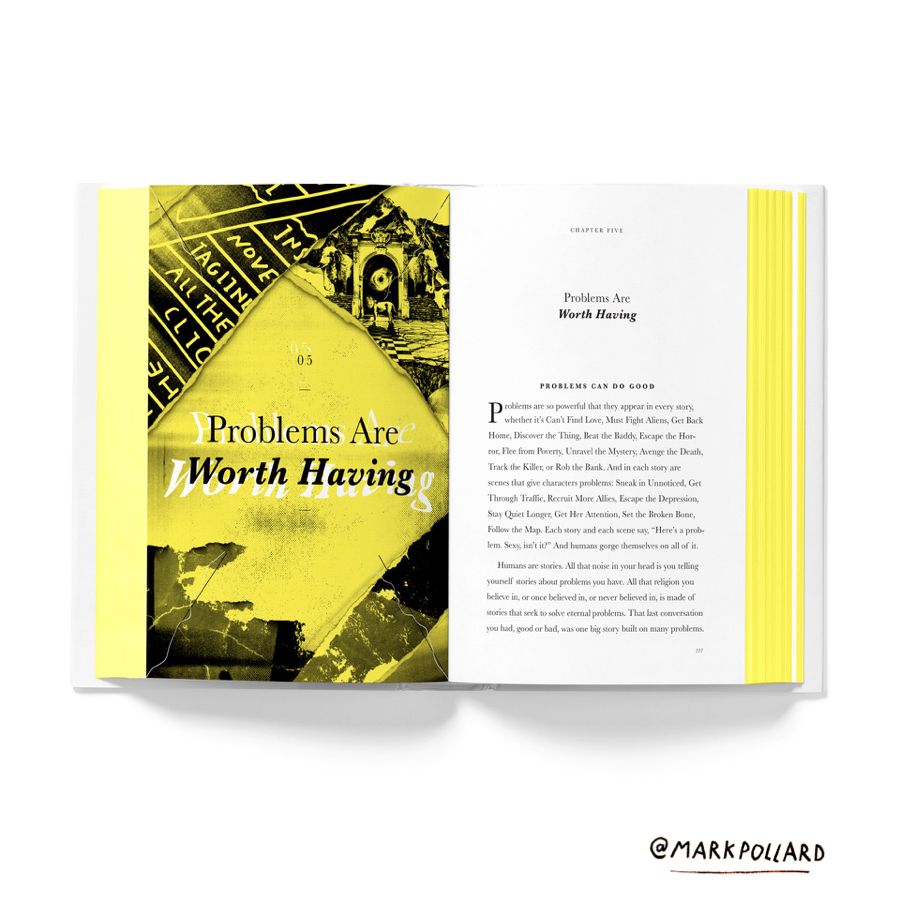 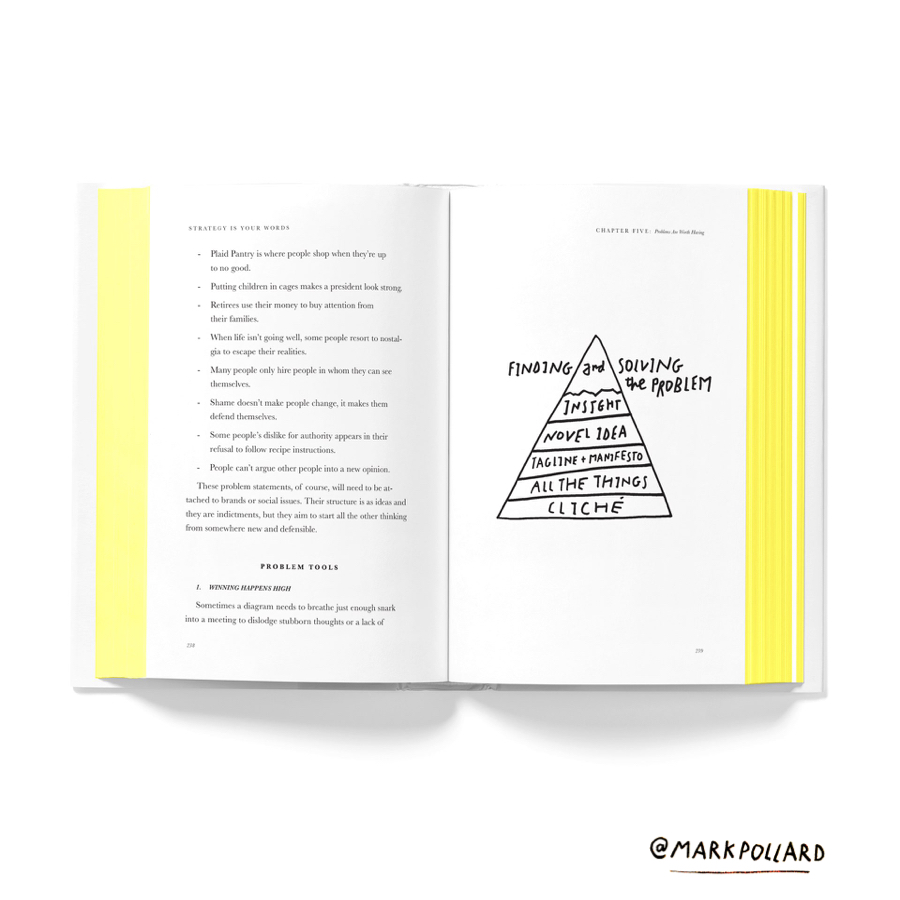