“If I don’t like things the way they are, I will change them.”

We at The One Club for Creativity may be most famous for our stellar award shows, and for our many inclusion and diversity, gender equality, education, and creative development initiatives, but beyond that, we're also a community of nearly 2000 individuals all across the globe. These people, from the most ambitious design school student to the loftiest global CCO, truly make us a "club," and we are always eager to let the world know more about our club's Members.

One such Member is Laura Starace, a globetrotting art director currently based in Munich with a most interesting journey that has led her to this point in her career. We caught up with Laura to learn her story. 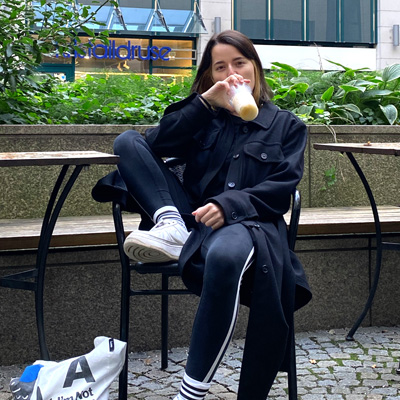 I was born and raised in Switzerland where I enjoyed what I would say was a normal childhood. I grew up with both my parents, two sisters, and my maternal grandparents. My mom's side of the family is Austrian, while my dad's side is from southern Italy, which is why I would always spend my childhood summers there.

I am a middle child, and I dare say I am the most creative out of the three of us. My older sister is really rational, while my younger sister is definitely creative, but also tends to rationalize things more.

That said, I wouldn’t say that my creativity was really nurtured when I was younger. I was always the most creative in my class and teachers would compliment me on my drawings in art class, but that was about it.

I used to draw a lot when I was younger, of people I knew or just some random things I saw in the garden, but I stopped doing that when I entered high school when “the real life” caught up to me.

My dad always wanted me to have a “real” job. Have good grades, make a good living so I could look after myself. But it’s really hard deciding what you want to do for the rest of your life when you’re only 16. Honestly, I never really cared much about what others wanted me to do. I knew I was gonna figure things out one way or another.

I don’t really make plans — sure I have some things I want to do and goals I want to achieve. But I can’t plan my life out. If I don’t like things the way they are, I will change them.

"I don’t really make plans — sure I have some things I want to do and goals I want to achieve. But I can’t plan my life out. If I don’t like things the way they are, I will change them."

I understand that you decided to uproot and start traveling the world on your own at 16. That's a pretty big step — what made you do it?

I guess I was never really a stay-at-home sort of person. I always enjoyed adventures, going to places I don’t know, and just exploring. I don’t mind not knowing where I’m going, it’s exciting to me. I was also never worried about not finding my way back because I knew one way or another life would lead me down the right lane if I just followed my gut feeling.

I caught the acting bug when I was a young child. It was always something I wanted to try, so when I turned 16, the only logical thing to do was to go to the United States to learn English so I could eventually enroll in an acting program overseas when I would be old enough. Plus learning English is something that I could sell to my parents easily.

I attended the Lee Strasberg Institute in Los Angeles where I lived for almost three years, and I think acting taught me so much about myself and others. I studied method acting, which is essentially something that teaches you to draw from your own experiences to put on a real performance. I would say that was the place where I found myself as a person.

There is a lot of psychology playing into acting. When working on a scene you really have to deal with the character you’re about to play, why do they do the things they did, what led to their decisions, why do they react this way and not another, what are the circumstances they’re in, the past that might be affecting who they are today and so on. Once you know all that, you get to play the character and really start to understand them better.

Now take that into an advertising context and boom, you know who you’re trying to reach and what is important to them. It also helps with human insights a lot.

I was about to ask, how did that acting education segue into an interest in a career in advertising?

I pretty much fell into advertising, just like that. I got back from LA, working a job that made me some good money but wasn’t creative, and I knew I needed to do something creative. So I literally googled “creative jobs” and found Miami Ad School and their Art Direction program. I was like okay, cool. I went to see the school, signed up, and off I went to Hamburg!

I’m going to be honest with you: I was doubting my decision for the first six months because I had no knowledge or experience prior to this. Was I even any good at this? I had to learn everything from scratch while some of my classmates had years of experience in the field. But the more I did it the more I felt like this is something I can be really good at.

One thing I learned that wasn’t on the official curriculum is that thinking creatively is harder than it looks.

"I’m going to be honest with you: I was doubting my decision for the first six months because I had no knowledge or experience prior to this... But the more I did it the more I felt like this is something I can be really good at."

It takes a lot of brainpower.

Your globetrotting didn't end with ad school, as your ad world adventures have taken you to three different continents: Asia and Geometry in Tokyo; Europe and McCann in London; and North America and 360i in New York. What was your single biggest takeaway from each place?

The biggest differences I’ve seen are that Tokyo is very different culturally, not just within the workspace but also in their communication. It was very refreshing and new in a way that I appreciate how subtle they are. London was very close to home, however it did feel a bit more cheeky compared to what I knew before. New York is very fast-paced and loud (metaphorically speaking) - in both the workplace and their communication.

So COVID hits, throwing everybody for a loop, and you find yourself getting a crash course in remote learning via The One Club's Mentorship program. What was that experience like?

I actually had a friend who participated in the summer Mentorship program before me and she encouraged me to sign up. I worked with FCB Inferno under Sarah Lefkowith, who was a CD there at the time. She was also really new to working remotely and was surely just adjusting to it herself, but she did a great job leading and tutoring us through the program. My teammates and I all got to know each other via a video call, which made me nervous because A) you’re meeting new people and B) you meet them through a small, square screen. Everyone turned out to be really cool, and I think that overall we made a great team and produced some nice work.

We worked on a summer campaign for a hard seltzer brand. I felt like at that point it was really challenging creating ideas in general when COVID numbers kept rising. A lot of things were off-limits and many ideas died just because nobody could tell if things would be over by the summer of 2021. We did, however, create some fun ideas and I believe we all learned from each other. It’s always interesting to me to see other peoples’ processes when tackling a brief. You can learn so much from others by just seeing how they do things and it can shake up and expand your creative process a lot. I need to keep in touch with them to find out how they're doing;l with their talent, I’m certain they’re out there doing cool things.

And now it's time for you to do cool things, as you've landed a job at thjnk in Munich! Congratulations! What has that been like so far? What are you bringing to the table?

I never thought I’d be living in Germany, but here I am! And it’s honestly been nothing but great for me so far. I get to work on different clients which keeps things fresh, plus the team here is a-m-a-z-i-n-g. Such cool people, I’m telling you! I think the coolest thing to me so far was going to a campaign shooting and just experiencing how it’s done behind the scenes. Plus, apart from daily business, we’re always brainstorming on bigger “award ideas” which is what I really enjoy doing. I actually haven’t been assigned to a partner yet, however, I am supposed to get one real soon!

I think the greatest asset I bring to the team is a different way of thinking and approaching things. I think my personality fits well with the rest of the team and I’m always up for trying something new.

Seeing that you're a creative nomad of sorts, where do you see yourself in a few years' time, geographically and professionally?

Geographically could literally be anywhere. Wherever life takes me! Professionally I’m happy with the work I’m doing right now, I definitely want to keep conceptualizing cool ideas. I see myself exploring more with art direction in television and film, or maybe I’ll even direct a TVC at some point. Hard to say. I think for now I just want to soak it all up and learn as much as possible and take it day by day. Like I’ve previously said, I don’t really plan life ahead to begin with!