The Call for Entries period of The One Show 2018 is over, and now our attention shifts towards preparing for final judging. And while most agencies scrambled through to the bitter end to get their entries ready, some took advantage of our quarterly entry periods to submit their work much earlier in the year. These entries have already gone through preliminary rounds of judging, with the top scoring entries making the shortlist and moving directly to the final round next month.

Ahead of the final round of judging, we are highlighting some of the shortlisted work, focusing on the smaller agencies on the playing field. Next up: "The Logo Donation Project" by Oslo's JCP Nordic, which was shortlisted in the Film category. We caught up with JCP Nordic's Executive Chairman Øystein Tynning and Creative Director Paul Little to chat about this impressive self-promotion project.

Before you could give away your old brand identity, you had to have a need for a new one. What prompted the need to refresh your look in 2017? 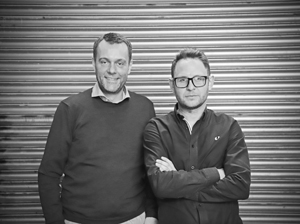 Øystein: We've evolved a lot as a company over the last 20 years. We started as an event agency with only four people, and now we've grown into a full communications house, covering the Nordics with 140 people.

Over the last three years, we have worked hard as a company, focusing on our culture, vision, mission and values. They are clear and are lived by the entire organization. 2017 was a point where we felt it was time to evolve our identity to better represent who we are, what we stand for and where we are going.

Paul: The design process was fairly typical: workshops and design strategy, followed by relevant reasons why it should be as it is. What was important to us was to commission a designer from outside of our agency, in order to get a fresher perspective.

How did the idea to donate your old branding and promo swag come about?

Paul: This is a cool one for us to answer! Each quarter our company does what we call 'Creative Level Up'. Here we bring together all of the creatives from the different disciplines — events, digital, PR and advertising — mix them up into separate teams and have a creative shoot-out.  The brief is given out at 9 AM, the deck must be ready by 4 PM, and  and a jury made up of management decides what we're going to do. The brief for last year's first quarter Level Up was how to use our rebrand as an advertisement for the agency. This is how the Logo Donation Project was born.

What were some of the more unusual requests that you received from people looking to claim your old look?

Øystein: We had a dog hairdresser, an industrial designer, a slew of photographers and web designers, a squash club leader, a kiting instructor and a fruit purée producer. We even had a church founder who was willing to rename his organization Jesus Christ Productions.

What factors made you ultimately pick the Romanian car wash owner? Do you know what inspired him to apply?

Paul: It was his very frank honesty. He told us his business was struggling, and he felt that a new logo would really help motivate his team. He seemed like a very genuine guy, and we just had a feeling that this was the one.

Finally getting to meet him was great. His team was made up of some very cool people, and of course he himself was over the moon about the whole thing! A few months later we brought him to Oslo for our annual party at the JCP headquarters.

"He told us his business was struggling, and he felt that a new logo would really help motivate his team."

Is there anything you’d change if you had just a little more time?

Paul: It's incredibly rare we say this, but in this instance, we were pretty happy with the outcome. If I had to pick something, we would've liked a little more time in offline as there were a few cuts that just couldn't make it, and maybe it would've made a stronger piece of content. Regardless, the idea was so clean that not having it didn't really effect the spread.

How’s the Romanian business doing today? It must be the best branded car wash in town!

Øystein: Well actually he’s been a little inspired and has branched out – he now brands buses in the evening with local ads!

Now that you have a spanking-new brand identity, what’s next for JCP Nordic​? After all, as this year’s campaign says, if you win you’ll become “famous famous”!

Paul: Watch out for what we're about to do for Skittles and Volvo — both will be out in the next two months. This summer will be our 20th anniversary party, and we used the latest Creative Level Up to find the best way to make some noise. This campaign's definitely going to be worth looking out for. 20 years ago our name was inspired by Will Smith's song 'Just Cruisin'' and we've found a pretty interesting way to use that. Watch this space!

Øystein: We’re also hoping to come to New York for the awards in May. We'll be sure to bring a newly branded mug for you!?