Tackiness has always been one of Las Vegas' most endearing qualities. Sure, there have been attempts to make it seem more sophisticated, but for every slick new development like CityCenter, there are movies like The Hangover that remind people what this town is really about.

But when the developers of the recently constructed Cosmopolitan Hotel asked Chicago-based agency Digital Kitchen for their expertise in digital design, they had a completely different clientele in mind.

"They talk about their customers as the curious class," says Anthony Vitagliano, executive creative director at Digital Kitchen. "You have the middle-America crowd and then you have the people there for the parties. It's not a destination for a lot of people who are interested in art, fashion or music. But they wanted to grab that other demographic of people who appreciate sophistication and give them an experience that went beyond gambling."

The result is startling—visitors who enter the hotel are greeted by seductive images of silhouettes seemingly trapped inside each of the columns, floating jellyfish and large clocks, depending on the time of day. Video panels are incorporated into almost every vertical surface with three-dimensional graphics, creating the illusion that what you see is real. Even bookshelves showing the spines of books are screens.

One of the driving forces behind the project was Chris Burns, director of digital experience at The Cosmopolitan, who challenged Digital Kitchen by literally using the hotel as a canvas.

"Chris told us about the project and what his vision was for the hotel—a convergence of art and technology," explains Vitagliano. "We had no idea what could or couldn't be produced, but we had the canvas. We were tasked with defining the digital voice and brand through the experience in the lobby as well as the entire hotel including the marquee and the external signage. So we went off for about a month and hunkered down to define the brand voice. And that's how we came upon the idea of the digital experience."

One of the biggest challenges was building a complete content delivery system including a back-end from scratch, which took months of planning and testing. Each column in the lobby is comprised of 12 high-definition video panels, and several other screens line the walls behind the reception area with 500 total throughout the building. All work in tandem and are timed to change throughout the day with different themes; during daylight hours, guests might see floating compasses or flower buds opening, and later in the evening, they are treated to more seductive imagery such as naked profiles looking out from inside the columns.

Says Vitagliano, "The content centered around themes like navigation, discovery and seduction—things that would introduce the experience that wouldn't be overwhelming. But we also wanted to inject an element of mischief and the unexpected, because it is Las Vegas. So we thought, how can we turn the columns into physical spaces and make them feel like someone's inside? And so we created the content based on that and came up with ideas like having the bookcase pressed into the wall to create the illusion that it's real."

Some of the content is commissioned, giving the hotel and Digital Kitchen the opportunity to collaborate with different artists, designers, experiential designers and filmmakers. The lobby becomes a constantly rotating virtual gallery, providing guests with a different experience every time.

Since its launch, The Cosmopolitan has been a resounding success, with its lobby becoming a tourist attraction much like the fountains at The Bellagio or the skyline at New York New York Hotel and Casino. A steady stream of visitors can be seen gawking inside the lobby and taking pictures.

But unlike many other parts of Vegas, the attraction is more than just skin deep.

"You can go anyplace now and see a digital canvas placed anywhere. It's been a part of the retail experience for a while now, and you're starting to see it used in theme parks and other hotels. The systems to deliver quality films isn't rocket science. You see all this technology all around you, but what really matters the most is the content." 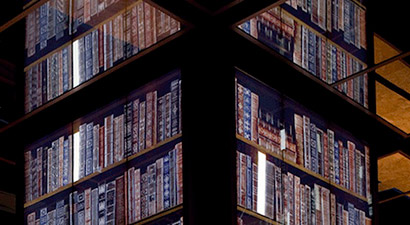 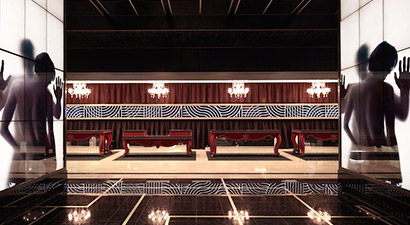 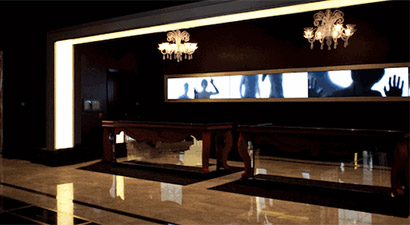 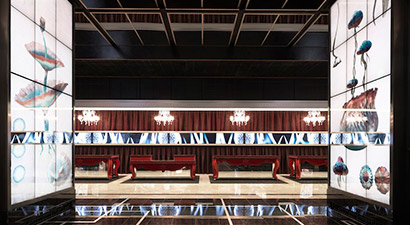 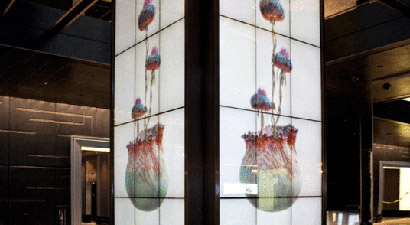 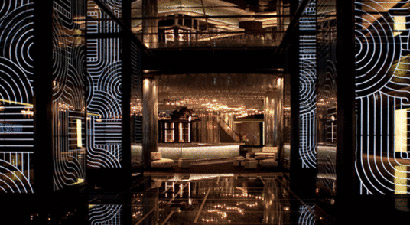