The View from the Jury Room: Pam Scheideler

"Beauty is not necessarily perfect."

Among this year's phenomenal collection of judges is Pam Scheideler, Partner and Chief Digital Officer at Deutsch in Los Angeles and judge on the ADC Interactive jury. Pam is a powerhouse in the industry, with lots of awards lining her shelves, so it made sense to grab some time to find out what's going on in her jury room.

Thanks for taking some time to chat about your day — and oh, what a long one it was! If you were to sum up the type of work that you've been seeing today in a short pithy sentence, what would it be?

I think that headline would be “brands and people building experiences that allow for co-creation with the audience are winning.” I’d also add that brands that show an understanding of the digital landscape and the back and forth through social platforms are doing extremely well. You can see so clearly when an idea is made to live on those platforms andinvolve the user, rather than just being a one-way communication.

Among all the entries we saw, there were really a lot of standout pieces, but those that demonstrated that they were confident enough to have a conversation with users and invite them in really stood out to me.

I spoke with some other judges earlier today, and I had asked them about certain trends in the work, if there was anything they thought they were seeing too much of. I understand that you have a different perspective.

We were talking about that earlier, and I had actually the opposite feeling. I sometimes feel that our ambition as creatives outpaces the actual reality. We've been talking about AR and VR and mixed reality for five or eight years now, but the hardware hasn't been there and the content hasn't been there and brands really haven't been there in a big way. Today, however, given the fact that cameras on the phones are allowing to have AR experiences without an app download, finally the technology is where we wanted it to be five years ago.

Five years ago we had the same ideas but we couldn't really execute them. Now we're starting to see amazing execution. So for me it’s not, "Oh, there's something here that I think we’re seeing too much of." I'm like, "Ah finally, we're starting to see the ideas the way that we've always envisioned them."

I think that highlights the fact that the evolution of technology is of utmost importance in this field. As someone with over 20 years of experience, you’ll probably remember back when they’d say that digital was where you went because you couldn't get a job in “real” advertising.

(laughs) Are there still groups of people that think that digital creatives are second-class citizens? I mean, some of that still does exist in some places, but I think we're all maturing. Back then people thought, "Oh, digital advertising is banner ads" or just cheaper content. Nowadays we're seeing brands interested in real engagement, and we can get that deeper engagement digitally. I think people who wake up every day and are fascinated by the way that others are interacting through social platforms, or new ways for them to have experiences through technology, these digital-first people

Can you name anything that you saw today that really blew you away or surprised you? I mean it’s hard to be surprised when the good stuff has gone viral — at least within our industry — before it reaches the jury room.

It's interesting, because I think there's both sides of that, right? Sometimes it’s good not to be surprised, because that work passes the “grandma test.” If your grandmother has seen it, to some extent, that makes it even more powerful that the world is actually using it, versus something that is amazing but very niche, that no one actually saw or interacted with.

But to pick something that blew me away? I’d have to go with all of the Spotify work. They had a bunch of different executions. The astrology-based “Cosmic Playlists” just had their finger on the pulse of what culture was talking about and their audience was talking about. Their “2018 Wrapped” was beautiful. Everything was inspiring, and there was a way for everyone to join in, This work stood out to me when I saw it as a consumer, and it still stands out to me when we put it under the microscope of a jury room. 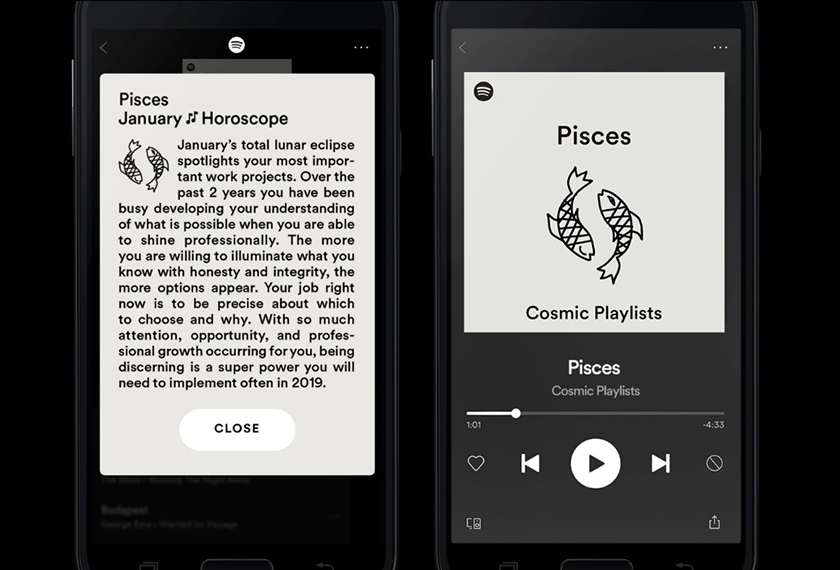 I also love it when brands go all in. There was an entry for Inca Kola, a brand that has been the official sponsor of the top-of-the-hour time announcement on Peruvian radio for decades. But on International Women’s Day, they educated the public with a new statistic about gender inequality tied to every single minute of the 24-hour day, spread across multiple media platforms.

I think it would have been very easy for a brand or a marketer to say, "Well, why don't we do it a few times a day when it will target the maximum number of people?" But they went all in, fully invested in the idea. When you have these ideas, and people commit to those ideas and execute them exactly the way that they were concepted, it really shows. The commitment from all sides makes the work really stand out.

Talking in the jury rooms is generally kept to a minimum, at least in these early stages. That said, what was the most interesting conversation you and your fellow judges have had about judging the work?

First of all, PJ Pereria has been an incredible jury chair. He set the tone from the very beginning saying that there are different award shows that are going to focus on different things, and it's not the job of this jury to focus on business results. This isn't about earning media impressions. That’s a different award show. An ADC jury’s job is to identify work that defines craft and beauty today and in the future. We're supposed to say, "Given this cultural context and its creative context, is this work beautiful?" We’re talking beautiful design with a capital D. Great typography, great composition, work that makes your heart sing a little bit. PJ has put the design ethos of the ADC front and center in driving the evaluation of interesting ideas. What a fantastic mission!

But then that led to another conversation. As I mentioned earlier, the best brands are those who embrace co-creation with its consumers, but how do you define beauty when something is co-created? It’s not art directed in that typical sense, where we're making it perfect, perfect, perfect. So often we just have ideas and we're putting them out into the world and we're inviting people to co-create. Those ideas are very powerful because individual people can unleash their own creativity in partnership with a brand. It becomes very unclear where the advertising ends and the audience begins, and it's a virtuous cycle, but it's potentially less perfect.

Beauty is not necessarily perfect.