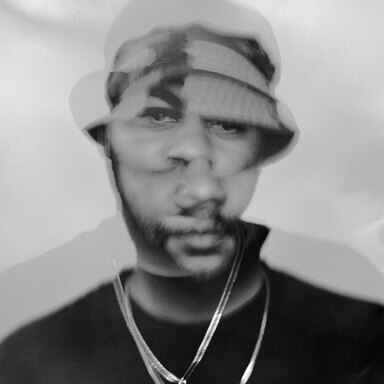 Hassan Rahim is an art director from Los Angeles, CA and based in New York City. His aesthetic deals in stark, esoteric imagery; it doesn’t recoil from darkness. His direction and design have appeared on and ranged from magazines, gallery walls, record sleeves, concert stages, hats, street corners, and of course online.

Often as distinctive and boundary-troubling as he himself is, his work embodies far-flung but carefully steeped influences arranged into thrilling new harmonies. His willingness to forge new aesthetics rooted in but not tied to his own perspective has won Rahim venerable status as a thought leader, specifically among young black artists interested in nuance and subculture. As an autodidact, Rahim’s work is all the more emboldening. His example is part and parcel of a movement which is affecting music, art, fashion, and culture in profound ways.

He has had the honor of working with clients such as; Netflix, Nike, Apple, Khalil Joseph, Herman Miller, Carhartt, Jason Moran, SSENSE, Tiona McLodden, NTS Radio, The Safdie Brothers, Marilyn Manson, and Nine Inch Nails to name a few.

In 2015 Rahim founded 12:01, a full-service independent creative studio; the name of which is a wry tribute to his tireless commitment both to aesthetics and the demands of his vocation.