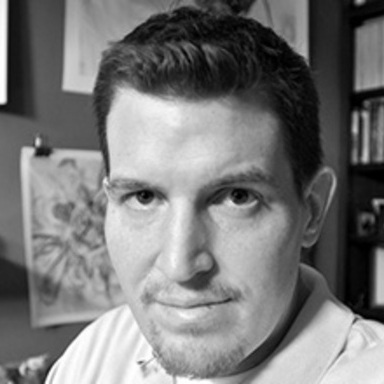 Erik Natzke, artist, designer, and programmer, creates and gives material substance to his ideas through immaterial computer code. His sensibility, combined with his stubborn resolve, has enabled him to push back the limits of his medium, beyond known methods and approaches. Erik loves to take risks, in the awareness that the value of failure lies in discovering new, never-before conceived solutions.

Natzke's work focuses on aesthetics and methodology, in which code and numbers generate beauty. When Natzke wants to draw something, he doesn't pick up a pencil. He opens his Flash software editor and starts writing code. It is at this initial stage that he controls the environment in which his creation will grow and take shape down to every last, minute detail, before stepping back and watching the work emerge as the code is executed.

In fact, in his creative process, Erik Natzke is more like a sculptor than a painter. Painters with their brushes to create something from nothing, whereas when working with available code, the artist chooses from the infinite possibilities for numerical recombination. In this sense, Natzke sculpts software in his image and likeness. Working step by step, Natzke changes a line of code, adjusts a variable, and assigns different values to codes generating shape and color. Once this sort of 'library' of shapes is created, then it is simply a matter of changing the values of certain variables, and with a mere click a brightly colored flower transforms into a series of vivid lines.

More than anything else, Natzke is obsessed with color. Just take a look at his flickr photostream to appreciate how important the color wheel of nature, and its translation into digital language, is for him. Natzke steps out of his studio, into the garden and takes a photo of a flower. He then sits down and tries to create the colors through number and code. The digitally created color is the outcome of compression encoding of the color range. Traditional palettes are not enough for this artist. Natzke won't just make do with existing tools for creating digital color. Instead he reaches directly into the source code, dipping his fingers into the digital links, and like a contemporary alchemist creates all the colors he needs.

Day-in, day-out, Natzke pushes ahead with his expressive quest through numbers, lines of code and processes. His mission is to create a bridge between the physical and digital worlds through color. Peering into nature, he then seeks to create that same impression on a digital canvas. His strength lies precisely in his ability to create an expressive bridge between the physical and digital worlds. For Natzke, the creative process is not confined to the programming room, or to moments when he contemplates nature. Rather, it is a continuous lending and borrowing of shapes, patterns, colors, processes and dynamics between the material and immaterial worlds. Form follows nature.