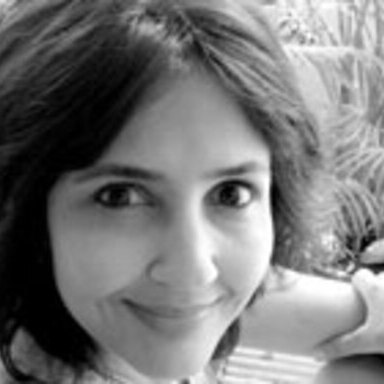 Anuja Chauhan has spent seventeen years in advertising and still hasn't gotten enough of it!

She joined JWT as a trainee in 1993, and her very first campaign, Pepsi - Nothing Official About It, released in response to Coca Cola buying the rights to be the official soft drink of the IIC Cricket World Cup 1996, pulled the carpet out from under the Global leader's feet and made Pepsi the most iconic brand in India.

Her last assignment, which ended on August 31st, 2010, was as Executive Creative Director and Vice President at JWT Delhi, the third largest JWT office in the world, after New York and London. While there, she successfully launched and consolidated major multi-national brands in India, mainly Pepsi, Mountain Dew and 7Up. The other brands she has worked on intensively include Frito Lays, FritoLays Kurkure, Mirinda, Nestle Kitkat, and Nokia phones.

Anuja has won over a 100 national and international awards – including Copywriter of the Year at the Bangalore Ad club, Solid Silver at the Abbies, a slew of Golds and Campaign on the Year at the Triple As of I, a Popular Choice Gold at the Goa Adfest 2007, Silver at the 2008 Effies, two silvers at the Goafest 2010, a Gold Lion for print at the Cannes Advertising Festival 2010 and Gold, Silver and Bronze at Adfest 2010. She is currently ranked 26th in thecreativerankings, a list of the top 30 Executive Creative Directors in Asia-Pac.

Anuja is also a bestselling author. Her debut novel, The Zoya Factor, set against the backdrop of a fictional ICC cricket world cup, was number 5 on India's Top Ten Fiction List 2008. The film rights for the book have been bought by Shahrukh Khan's Red Chillies Entertainment, arguably Bollywood's premier production house.

The novel has also won Anuja a Platinum Stilletto at Cosmopolitan Magazine's Fun Fearless Female Awards 2008 in the Literature category.

India's leading newsmagazine, India Today, has awarded her a "Woman as Storyteller" award at the 2009 India Today Woman Summit.

FICCI FLO – The women division of the Federation of Indian Chambers for Commerce and Industry, declared her the Advertising Person of the Year 2009. Verve magazine has featured her in their List of 50 Indian Power Women, 2009.

She is also being featured in Elle Magazine's list of Women to Watch out for in 2011.

Her second novel, Battle for Bittora, a whacky irreverent take on the electoral process in the world's largest democracy, had an early October release this year. The book has opened to both extremely positive reviews and thumping sales and is currently selling at number 3 in the list of top 100 books at WH Smith booksellers. A movie deal is also being negotiated.

Anuja's work has been described as "insightful, irreverent, edgy." Her core strength is her grasp on strategy and an instinctive 'feel' for the popular pulse. She figures regularly in The Economic Times list of Top Ten Hottest Creative Directors in India. She is best known for the sharp, sticky campaigns she has written for PepsiCo - including Nothing Official About it, Yeh Dil Maange More, Jor ka Jhatka, Dheere se Lage, Mera number kab aayega? Yeh Pyaas Hai Badi, Oye Bubbly, Darr ke aage Jeet hai and Be a little Dillogical. These slogans are truly a part of popular culture today and have been turned into move titles and TV shows and the names of babies.

(Anuja was born in Meerut, UP, the youngest of four sisters. She studied at the Army Public School New Delhi, Sophia Convent, Meerut and DPS, Mathura Road. She has an honours degree in Economics from Miranda House, Delhi University. She has a diploma in Mass Communications from the RMIT, Melbourne.

Anuja is a member of the Delhi Gymkhana Club, the Bangalore Club and the Karol Bagh Knitting Club. She lives in Gurgaon with her husband Niret Alva and their three children, aged fifteen, twelve and nine.)