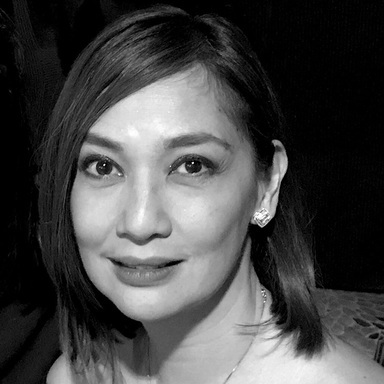 Merlee is the first Filipino to be awarded: The Creative of the Year for Southeast Asia in the Campaign Asia Pacific Agency of the Year.

She is "Chairmom" and Chief Creative Officer of Dentsu Jayme Syfu and the only woman in the 20 top creative directors in ASIA as reported by Campaign brief Asia.

Her works for Smart telecommunications and Unilever push creativity and humanity. She has won major awards that include a Cannes Lion Grand Prix for Mobile, Grand CLIO, NYF Grand Awards, D&AD yellow and wood pencils and many more.

Merlee is a sought after international speaker. She has shared valuable learnings and insights that include “Changing the World through Media” at the IAA Global Leadership Forum in London, “Hard Sell and Heart Sell” at the AdStars Festivals in Busan, Korea and “Gender Equality” in advertising at the SPIKES ASIA in Singapore and on “A Woman’s Journey to Judging” at the recent LIAisons in Las Vegas.

She is an opinion leader when it comes to topics close to her heart: Mothers in a working world. She spoke about the “World’s favorite target market: MOTHERS” at the Lions Health in Cannes and tackled the struggles of balancing home and career in SheTalkAsia’s “Every girl Can” Conference.

One of CNN’s Leading Women, she’s a member of Gabriela-a feminist group to help stop violence against women and children.

To push women leadership, she initiated the #sistergood project in the office to inspire women support other women at work.

She also wrote and illustrated her first book “Everyone Can Be Creative”. This is an inspiring handbook to discover everybody’s creative side. She launched this in major news networks, radio shows and in the biggest bookstore in the country. Advertising schools are currently including this as a course requirement.

Merlee is also a mom to 4 beautiful girls, and an inspiration in breaking the glass ceiling in this mad men’s world.