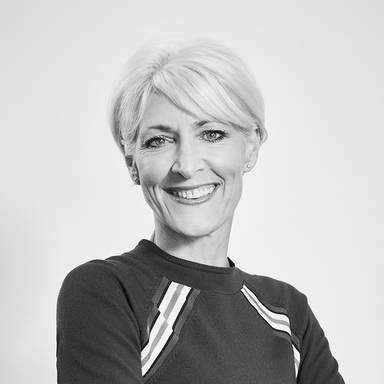 Rosie Arnold is one of very few women holding a senior role in the creative department of an advertising agency.

She started at Bartle Bogle Hegarty (BBH) in 1983 when it was just a tiny start up moonlighting from her Graphic Design degree at Central St Martins.

In her time to date she has been responsible for some of the Agency's most iconic work from Pretty Polly and Levi's in the 80s; The Independent and TAG Heuer and Levi's in the 90s; Lynx (The Lynx Effect) and Robinsons in the 2000s and most recently Bailey's and Yeo Valley.

Her work has amassed many awards including six Cannes Gold, six D&AD pencils and three Campaign Golds. For the last ten years she has spent most of her time as Creative Director on Lynx where she has nurtured many other hugely well regarded pieces of work. The brand has become one of the most famous advertisers globally and one of Unilever's major brand successes.

In September 2007 Rosie took a three month sabbatical and went to the Royal College of Art to study Communications, Art and Design. She was tutored by luminaries such as Quentin Blake , Professor Dan Fern, Anne Howeson and Brian Eno.

In 2012 she was only the second women to be made President of D&AD and presided over its 50th birthday celebrations.

In 2016 she chaired the judges on the British Television awards.

In August 2016 after 33 years at Bartle Bogle Hegarty Rosie finally decided to test the waters somewhere new and moved to be Creative Partner and Head of Art at AMVBBDO, London.

Rosie has managed to combine her successful career with raising her two boys and three step daughters and learning to Fence. She says of her multi tasking role "It feels a bit like being Ginger Rogers. You're expected to do everything that Fred does just backwards and in heels!"