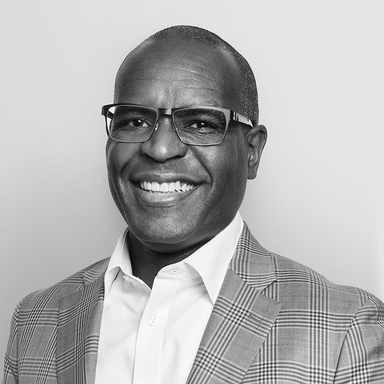 It’s safe to say Kirk McDonald has earned his stripes. Though he has more than 25 years of experience working with the world’s top brands, media companies and technology providers, it’s Kirk’s personal history that inspires his present role as Chief Marketing Officer of Xandr.

The heights by great men reached and kept Were not attained by sudden flight, But they, while their companions slept, Were toiling upward in the night. -- Henry Wadsworth Longfellow, The Ladder of St. Augustine

Kirk’s mother chose the above quote for her son’s yearbook entry upon his graduation from The Bronx High School of Science, and its lesson about hard work has been Kirk’s guiding mantra ever since. It also planted a seed of interest in computer science and programming – an early example of Kirk’s knack for predicting trends.

And if hard work is Kirk’s engine, curiosity is its fuel.

Kirk’s first job post-college was at Condé Nast, where hard work meant getting in a bit early and often staying a little late. Those extra hours proved fortuitous for him, opening doors for the occasional elevator conversation with early-rising editors and executives who had a bird’s-eye-view of Condé’s publishing brands. There, Kirk’s curiosity kicked into high gear, and he learned how stories were developed and, in a larger sense, how the magazine business worked. This intimate exposure ignited his interest in the publishing/media industry, and he hasn’t looked back since.

With a desire to learn and do more, Kirk’s insatiable curiosity led him next to Ziff Davis Publishing’s PC Magazine and Computer Life Magazine. Here, he married his newfound love of publishing and media with his interest in computer science and programming, which proved to be the perfect match. Kirk also gained valuable international marketing experience while brushing up on his sales leadership skills.

As the world went digital, Kirk again followed his curiosity to a then fledgling media company known as CNET. He would be one of the first to hold an executive-level sales position in the “Wild West” of digital media and advertising.

After leading revenue and marketing for Aquantive’s DRIVEpm/Atlas Enterprise, Kirk pivoted back to publishing as Chief Revenue Officer of Time Inc.’s Fortune/Money group and ultimately became President of Digital, guiding Time Inc.’s overarching advertising strategy across all digital assets. He then moved on to his next challenge as President of PubMatic, one of North America’s fasting-growing advertising technology companies.

Now, Kirk believes, the media and advertising industry is craving another story – and he wants to help write it. With challenge comes opportunity, and Kirk envisions a day where advertising captures the true potential in its future.

The marriage of art and science in persuasive storytelling holds rich rewards for consumers, brands and publishers alike. Kirk works to inspire wonder and curiosity, which have guided him throughout his career, and to retain a sense of fearlessness — perhaps even irreverence — as he and his team build a consumer-based advertising company at AT&T. When he’s not at work, Kirk is a happy husband and proud father in North Stamford. He and his family find inspiration in this motto:

“A lot of innovation and invention comes from not knowing that you can’t do something. There’s something very powerful about that — because you don’t know you can’t do it, you somehow find a way.”