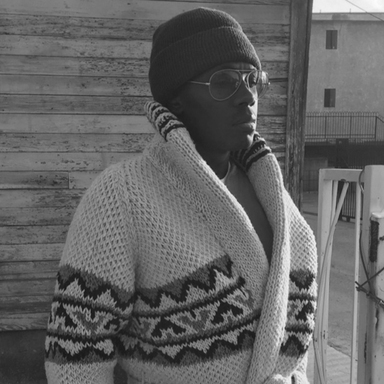 Reginald “Reggieknow” Jolley is a true marketing maverick. He worked as creative director for Burrell Communications Group Inc. where he revolutionized urban youth advertising with award-winning campaigns for Coca-Cola’s Sprite brand and McDonalds. Reginald’s intuition continually led to intelligent, courage-driven strategies that exceeded client expectations and yielded results. Sprite’s brand manager stated in a time magazine interview, “...the Voltron campaign quadrupled the number of people who say that sprite is their favorite soda.” Through the innovations achieved with Sprite’s “Voltron: Defender of the Universe” and “Five Deadly Women” campaigns, along with the McDonalds’ “New Math” spot which was picked as Adweek’s commercial of the year, Reginald paved the way for the evolution of modern advertising.

As head creative at the ad*itive, Reginald’s insight was key in the global campaign for the Reebok Freestyle 25th anniversary collection, which reinvigorated the iconic women’s athletic shoe for a younger generation. Predicting that market saturation and well- worn tactics could no longer be the standard for reaching young consumers, he began cross branding and cross promotional marketing that would take advertising to new levels while his non- traditional lifestyle initiatives, as done with Reebok’s Kool-Aid collection, catered to those seeking something bold yet authentic.

Reginald’s work is a combination of marketing science and authentic cultural instinct. He played an integral role in the conception of the “Formula 50 campaign,” an unlikely marriage between Vitamin Water and rapper 50 Cent. The Formula 50 campaign was so successful in helping Glaceau reach younger consumers and in forging the role of Vitamin Water in the bottled drink industry that 50 Cent even dubbed himself “the Air Jordan of Vitamin Water.”

Reginald most recently served as executive creative director for Troy Carter’s marketing company, A Idea, where he creative directed projects for numerous recording artists including Lady Gaga, John Legend, and John Mayer. Reggieknow also creative consulted for Kanye West and Yeezus. Currently, he is co-owner and chief creative officer of STEVE, a creative agency based in Los Angeles, providing branding, marketing and creative consulting services for artists and brands. Some of STEVE’s clients include Bibi Bourelly, Cocaine 80’s, and executive vice president of Island Def Jam Records, at that time No I.D.

Reginald’s artistic insight is legendary and his creative intellect, groundbreaking leadership and courage-driven strategies have earned him an undeniable status in the history of urban marketing.