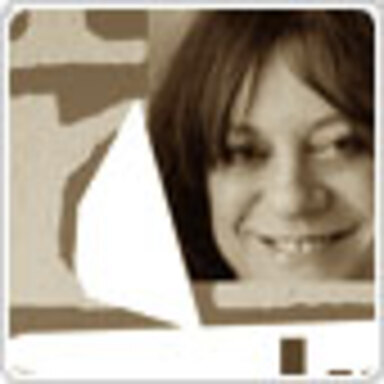 Laurie Rosenwald is the World's Most Commercial Artist and principal of rosenworld.com. Rosenworld's motto is "No job too big, No job too small, No job too medium." The studio's areas of expertise include drawing, graphic design and typography. They are also very good at book jackets, packaging and posters. And animation. And portraits. Laurie also designed a typeface, in collaboration with Cyrus Highsmith, called "Loupot." It is available from fontbureau.com. Actually there is no studio, Miss Rosenwald usually works alone, and rosenworld doesn't exist. In spite of this, rosenworld.com was launched in 1995. Her children's book, "And to name but just a few: Red, Yellow, Green, Blue" just came out, distributed by Chronicle Books. It is very good. At least "Cookie" magazine thinks so. Laurie teaches an incredibly popular workshop called "How to Make Mistakes on Purpose". It's not good to describe it, because people shouldn’t know what to expect. She has taught it all over the world, from Stockholm to Starbucks. Rosenwald does graphic design for IKEA, animation for Sundance Channel and Noggin, and drawings for The New Yorker magazine. She has some other good clients too, such as Ogilvy, J. Walter Thompson, Sony Music, BHV Paris, Vintage Books, Coca Cola, Bravo, Nickelodeon, Conde Nast, Little Brown, Houghton Mifflin, and Knopf. Her "New York Notebook" is published by Chronicle Books. It's a hyperillustrated, overdesigned guidebook, sketchbook, and blank book all mushed up together. Rosenwald has taught Graphic Design at School of Visual Arts, Parsons School of Design, NYU, and Pratt Institute. She has won all the usual awards from AIGA, Communication Arts, and Print Magazine, and has been on awards juries for Communication Arts, AIGA, The Art Directors Club, and The Clio Awards. She appeared as "Woman" on the season five opening episode of "The Sopranos." Really. She is also a painter. And she can speak Swedish like a native New Yorker.