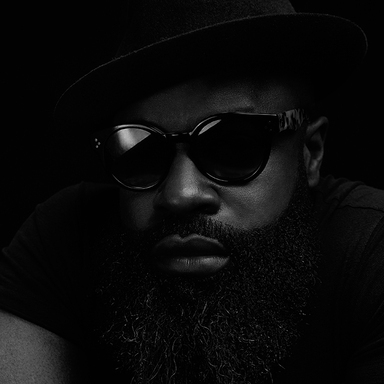 Tariq Trotter, better known as Black Thought, is an American rap artist and the lead singer/MC for the Philadelphia-originating hip-hop group, The Roots. A co-founder of The Roots alongside drummer Ahmir “?uestlove” Thompson, Trotter is widely lauded for his rhythmically complex and reference-driven lyrical content, his sharply honed live performances, and the fluidity of his creative abilities.

Raised in South Philadelphia, Trotter attended Philadelphia's School of Creative and Performing Arts where he met Thompson and formed the band the Square Roots. After gaining initial acclaim busking on Philadelphia's famed South Street and performing at a string of local talent shows, they released their demo/debut, Organix (1993), under the more simplified moniker "The Roots". Over time Trotter’s narratives grew more personal and political in nature, artistically expanding both him and the band.

The Roots’ 1999 album Things Fall Apart catapulted the group and Trotter’s poignant lyrics into the mainstream. Winning a Grammy Award for its lead single, “You Got Me” featuring Erykah Badu, Things Fall Apart garnered Trotter critical acclaim as an MC, heralded by press like Rolling Stone as the “lyricist’s lyricist”. The project also produced one of the most iconic covers in Hip Hop, solidifying The Roots as a revolutionary, deeply artistic band. Similar praise was given to their 2010 project, Wake Up, a collaborative effort with R&B singer John Legend inspired by the political landscape of the 2008 elections. In the spirit of the record, The Roots and John Legend opened the “Rally to Restore Sanity and/or Fear” in Washington, D.C. on October 30, 2010, winning a Grammy Award for “Best R&B Album” a few months later. This blending of art and political awareness also seeped into Trotter’s personal and philanthropic life, as a board member of Philadelphia’s own Mural Arts and continued support of organizations including OkayAfrica, The Agent for Change Network, Artist for a New South Africa, The New Museum of New York, and the Museum of Modern Art.

As The Roots continued to expand professionally, Trotter’s range of creative abilities became even more apparent. Under the leadership of Trotter and Thompson, The Roots began their over 10 year relationship with Jimmy Fallon as his NBC house band in 2009, starting at Late Night With Jimmy Fallon and transitioning in 2014 to the house band for the new Tonight Show Starring Jimmy Fallon. Their careers would see a creative explosion throughout the decade, with a slew of releases and a foray into acting by Trotter in “Get On Up”, a blockbuster biopic about the life of soul legend James Brown. In 2015, Trotter and Thompson took their talents to Broadway. Together they executive produced the cast album for the critically acclaimed Broadway musical “Hamilton”, adding to their Grammy shelf when Hamilton won “Best Musical Theater Album” in February 2016.

Trotter’s artistic evolution continues to expand and shift. In early 2017 it was announced that The Roots were partnering with Amazon for the development of an animated children’s series, while also executive producing “The Rap Year Book” docuseries with AMC. In the Fall of 2017 Trotter also starred in HBO’s hit series “The Deuce” as the braggadocious pimp, Reggie Love. He would simultaneously unveil a sneaker collaboration with independent brand, Clear Weather, sold exclusively at Barneys New York.