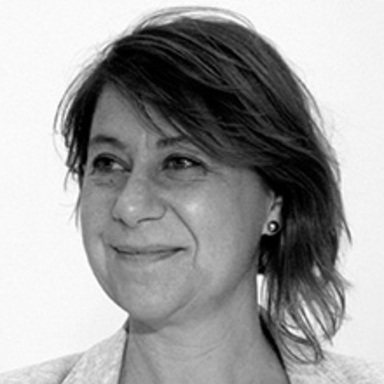 Meet Hélène Godin, a long time player and contributor to the national and international design scene, in all of its facets. A graduate of the Université du Québec à Montréal, she’s probably best known for having built her universally recognized multidisciplinary team as well as her insatiable mad love for branding. Revamps such as those for Cirque du Soleil, Tourisme Montréal, the Société de transport de Montréal (STM) and Pratt & Whitney Canada are just a few that have over the years made killer waves.

She prides herself on her endless strife to create symmetry among creative disciplines. Seeing projects through with an open, integrative approach - marrying architecture, design and multimedia - has resulted in stunning environments for Bose USA, the new SAQ stores and the urban spa Bota Bota, the latter which recently got her the Gold Lion award at Cannes.

As a partner at SID LEE, Hélène is no stranger to leading the pack. Guiding one of the world’s most highly celebrated creative teams for ten years, she has earned some of design’s most prestigious awards including a Gold and Silver Cannes Lion and a One Show Design Pencil award. Her work has been nodded by the Advertising & Design Club, the Type Directors Club, Communication Arts, Créa and Grafika. She was part of the jury for design at Cannes in 2011.

Perhaps, it is her down-to-earth and creative fostering activism for Héritage Montréal that sets her apart. Helping to put Montreal on the global map as a truly “design city” has won her recognition in Buenos Aires and Berlin through initiatives with the Sid Lee Collective UNESCO city of design. And, frequently giving lectures and spearheading design workshops internationally (such as TMDG in Argentina, Université du Québec, Week of Design in Lima Peru, Parsons The New School for Design in NYC and Willem the Kooning in Rotterdam) proves that Hélène Godin can’t keep creativity to herself. She knows she was born to share it.