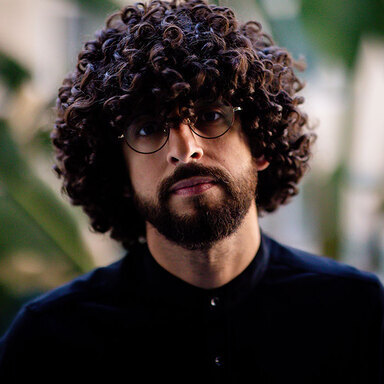 In the Middle East, he’s most known for his video “No Woman, No Drive,” which went viral in 2013. The video remains a hilarious satire on the debates over whether or not Saudi Arabia would let women drive (they eventually did in 2018), and Fageeh’s video was a momentous critical injection. This is part of his pointed charm, Fageeh uses comedy to highlight social issues, by turning them on their head. Using comedic tools, Fageeh questions cultural norms, even the most ubiquitous ones.

For acting, he rose to international acclaim when he co-produced and starred in Saudi Arabia’s submission to the Oscars ‘Best Foreign Film’ of 2016, Barakah Meets Barakah. For his role, he was nominated for a Best Actor Award at the Arab Cinema Awards in Cannes, and the film premiered at the Forum section of the 66th Berlin International Film Festival, winning the Prize of the Ecumenical Jury at the Berlinale. In North America, the film premiered at the Elgin and Winter Garden Theatres and at the 41st annual Toronto International Film Festival. It made history in 2017, when Netflix bought the distribution rights to the film, making it the first Saudi film to display on the streaming service.

Fageeh’s ability to invoke humor, as well as critical tenderness, gives him a laser focus that makes him a great social thinker. This specific lens is part of the reason why he continues to be a top consultant for ministers and regional entities, and why he previously held the position of Head of Content at Telfaz11, a multi-channel network with 12 million subscribers and more than one billion views. His views are expansive, while also instructional. Last year, he was an instructor at USC's MEMi program last summer. He’s lectured on the state of comedy in the Middle East, making him an important voice in this arena.

Currently, he’s writing a subversive sitcom named Brown Republican, about a—you guessed it—brown republican, a Bobby Jindal type. He’s also working on his second feature, Fay’s Palette, which is currently in post-production. He is acting, as well as producing the feature.