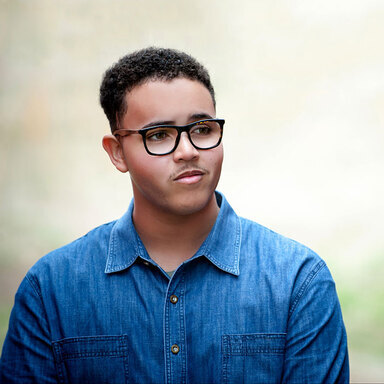 From pain to passion, to purpose, Seals was born into a life where he was forced to grow up faster than most. At the age of 4, doctors diagnosed him with a brain tumor the size of a golf ball. In constant pain, drawing became his escape. In the aftermath, that’s all he did, but his potential would go unrecognized until the last day of 2nd grade. On that day, he tried to recreate Monet’s Bridge Over Pond of Water Lilies using only basic watercolors. It was then that his teacher saw his potential and recommended to his parents that he start taking art lessons.

Little did they know that only a year later would he be back in the hospital with a residual from the original brain tumor. But after this residual tumor was removed, his true potential was revealed. Instead of drawing skateboarders like he once did, Seals began drawing busts of Venus de Milo, David, Greek columns, and broken chains.

Two years later Seals realized that he could make money doing what he loved, and began his first business in the 5th grade. He’d graffiti people names on index cards (after letting them choose a style from a sample sheet), laminate them, and sell them for $3 apiece until 6th grade.

In high school he designed tattoos and drew what became the basis for what would become his first typeface, Unveil.

While attending Stevenson University, he started selling S.U.PREME shirts and freelancing. And in 2014, Seals made a pact with himself that by the time he was 25, he become an internationally renowned designer. By the end of September 2019, Seals would be four years into the founding of his studio, Seals, and three years into the launch of his font foundry, Vocal Type Co.