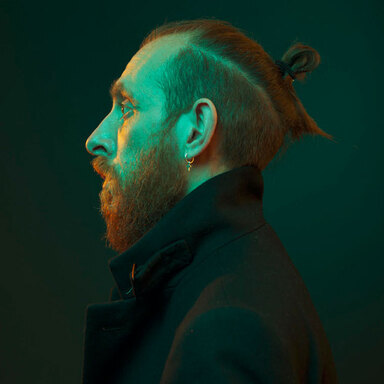 Based out of London, Pete Rossi is an independent, award-winning and multi-disciplinary graphic designer and brand consultant. Pete Rossi was born just outside Glasgow, Scotland in 1981 to an Italian father and Scottish mother and went on to graduate with a 1st from the Glasgow School of Art in 2006.

In 2011 he was one of the 50 winners to receive the prestigious Art Directors Club of New York Young Gun award. His work has also been awarded/featured by ADC, Creative Review (The Annual), Communication Arts, Design Week, D&AD, Cannes Lions, Graphis and Red Dot.

Pete is actively involved within the design community, having been a guest lecturer at Parsons New School of Design in New York and most recently Brunel University and at his old stomping ground, the Glasgow School of Art. He also appeared as a guest speaker at a one off pop-up event for Sailor Jerry. Pete holds an awarded membership with D&AD, Graphis and The One Club for Creativity (formerly ADC). He has featured as a jury member for design competitions such as the Young Guns in New York and The One Club for Creativity (Denver and San Diego chapters).

He divides his time between working with his own clients and freelance consulting — working in fields from Art direction, Brand strategy, 360 Branding, Brand guidelines, Book design, Digital media, Typography, Craft/Print and self initiated projects.