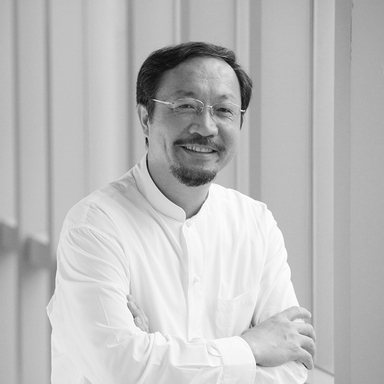 Apex Lin was born in Donggang Town of Pingtung County, Taiwan, in 1957. He received his M.F.A. from the Graduate Institute of Fine Arts, National Taiwan Normal University (NTNU), and is currently Chair Professor of Asia University, President of Taiwan Design Alliance, Founded President of Taiwan Cultural and Creative Industry Association, and Project Director of Taiwan Ministry of Education’s Programs, “Encouraging Students Participating in International Design Competition” and “Taiwan International Student Design Competition”. He served as Professor of Department of Visual Design, Director of Department of Fine Arts, Director of the Cultural & Creative Industries Center, and Vice President of NTNU. Lin has been acclaimed “Mentor of Design in Taiwan.” In avant-garde and contemporary design, his concentrated visual language in poster designs portraying the image of Taiwan, the island, has brought Taiwan’s design field going global.

Lin established the Taiwan Image Poster Design Association in 1990, actively encouraging Taiwanese designers to participate in international competitions, cross-strait exhibitions, and other activities ever since. In 1993, he was on the list of the top 12 CI designers in Asia by New DECOMAS. Then in 2002, he was honored with the ICOGRADA Achievement Award by the International Council of Graphic Design Associations. He was later listed among 100 Graphic Designers in the World by Phaidon in 2003.