Cinematographers use black frames to capture the precious moment of different actions. Set aside the genuine difference of black and white background used between films and books, it’s an astonishing fact that how they actually correlate with each other. Both of them use a series of still images to depict meaningful stories. Through words and pictures, though indifference in medium, striving towards the same goal --- to inspire and ignite the imagination of people who have locked their deepest desires inside. To make a remarkable film, the creative work of the script writers plays an important part. The pieces of papers hanging on the wall, resembles the masterpieces written by the script writers, turning over a brand new page for the movies to come.

The cinema, located in a Book City, has inspired the designers to combine the two elements into their design. Books are normally being published with white background and black fonts, whereas films, acting the opposite way, having images printed on black frames instead. The cinema uses this special correlation between books and films, by mix and matching their respective colors --- white and black. First, you’d see pages of the books flipping along the wall. There’re stacks of ‘paper’ standing on the floor. When looking from afar, you’d be mistaken and fallen into the illusion into thinking they’re real paper! Turned out they are the ticketing office made up of corian. Passing through the lobby into the hallway, the background switched from white to a striking black. Words of different fonts and colors scattered randomly against the black surface, forming famous dialogues extracted from classical movies.

Passing through the lobby into the hallway, the background switched from white to a striking black. Blackness has engulfed the whole space, including the floor, the ceiling and the pillars. Words of different fonts and colours scattered randomly against the black surface, forming famous dialogues extracted from classical movies. Here comes the good example of the harmonious interchange between books and films again. The film dialogues, appearing in the form of words, remind us of the natural coexistence among them, being so different in nature, yet serving the same purpose of delivering encrypted messages.

The corridor would lead you directly to the waiting room. Among the sea of the books appear in front of your eyes, you’d immediately notice two huge marble pillars. The natural pattern of the pillars looks surprisingly like the spine of the books. Narrow strips of green cylindrical spotlights are arranged in a crisscross manner hanging from the ceiling. The greenness adds an extra hint of Mother Nature aura to the perimeter. Books are made of paper, and paper originates from wood. The cylindrical spotlights look like branches stretching out from the trunk, fighting against each other for the warmth of the sun.

The black doors look like black frames, yet it also resembles the image of black-dyed pages. Strips of light beams leak through the door gap, reflecting on the floor and the ceiling. The light beams interlock each other geometrically. When you think of film, you’d link it towards light and shadow. Suddenly, the light beams and shadow formed by the black doors also trigger your memory of book pages. They intertwine and fold into heaps of butterflies flying towards various directions. However, for the sake of the love of words, they have chosen to stay at last. The pattern of the carpet in the cinema looks like a gigantic bookshelf, the aura of the books still lingers the perimeter while the moviegoers are enjoying the movie at the same time. 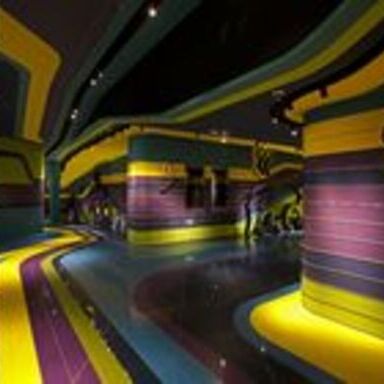 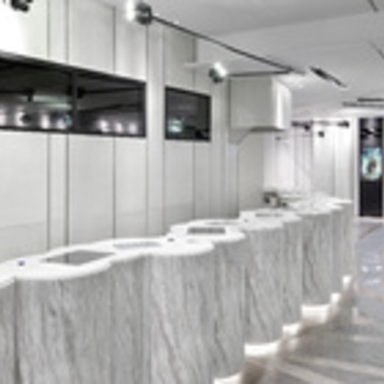