Last week, Honda's social media team at RPA made waves with its latest social media assault—er, campaign to promote the new vacuum-equipped Honda Odyssey. They took to Twitter to engage brands like Taco Bell and Kit Kat whose products (read: crumbs) pose a direct threat to minivan floors the world over. What ensued was one of the greatest examples of brand-to-brand interation that we’ve seen in recent memory. Jason Sperling, SVP and ECD at RPA, spoke to us about the project.


How did you choose which brands to interact with?

We considered a few important factors. "Which foods are most commonly found on minivan floors?" was the most important. They had to be relevant to folks. Things like Goldfish and Cheerios plague every parent in America. The other important factors we considered were brands that had a strong social presence (larger numbers of followers), and brands that were more likely to engage with us. We wanted it to be a fun interplay between brands, not a one-sided conversation.

Taco Bell is famous for its social media presence. It was even named marketer of the year by Ad Age.

What were your expectations when interacting with them? Did you know they’d engage?

We definitely expected TB to engage, but I can't say we saw that kind of response coming. And they were one of the first to tweet back, so we wondered if other brands might not play with us (thank goodness, we were wrong). But it made for a really interesting situation. It was like being told off in front of everyone on the school playground. Do you just stand there and take it, or come back? Our light-hearted response might have been my favorite tweet of the day.

Did you have to sell the client on brand interaction like this?

Our social clients get it and trust us. If it’s smart and true to the brand, they'll back it up 100%. And they understand the realities of real-time engagement, having recently helped orchestrate our Summer Clearance Live Vine Days and the Project Drive-In Twitter Auction. Being fast and reactive are the ground rules of the game, and because we work so closely together on a daily basis, and have for years, they're confident in our ability to execute.

What has the public response been? The client response?

People really sparked to it. I think they appreciate it when brands are more playful and spontaneous. They also appreciate it when brands shed their corporate skin and connect in a more human way. Talking to other brands was one aspect. But we were also vigilant about responding to shout-outs from individuals throughout the day. We even took people's requests to reach out to particular brands. They especially loved that.

The client loved this project, too. Honda's three pillars are fun, innovative and youthful, and this executed against all of them. And it played right into the broader brand theme line of “Start something special.” I'm sure that the cost didn't hurt, either.

And I think the brands enjoyed the whole interaction. It was a chance for them to have some fun and share it with their communities. It was also a good opportunity for them to expose themselves to all these other brand communities, while the spotlight was focused on us. Cheerios gets major kudos in my book for going way above and beyond the call of duty. After our exchange on Twitter, they made a sizable donation to Project Drive-In, Honda's effort to help save the American Drive-In.

Can you talk about the development and implementation of the project?

This was part of a broader campaign highlighting the Odyssey's new vacuum, which brought the crumbs and trash living on minivan floorboards to life. This was just such a fun and simple extension that we didn't want it to share the spotlight with our other initiatives like Project Drive-In, so we held off on it for a bit.  We spent a few weeks amassing a list of brands, writing tweets and comping images. We picked our target date, and leaked them out one by one. On launch day the entire team was on standby, so that we could quickly engage with brands who responded. Not only were we surprised at the number of brands that replied or entered the conversation, but how long it went on. Four days after our "snack attack," brands were still reaching out. It was crazy.

Was there a tweet-approval process?

Vet through me. Vet through legal. Vet through the client. Post. Fast. One break in the chain and this thing loses momentum and interest, and we go from looking savvy to looking silly. Luckily, everyone understood the urgency. Even our lawyers.

Why do you think this project got so much media coverage?

I think it was a combination of a few things…

This level of brand-to-brand, real-time engagement was something totally new to Twitter. We've seen brands play in this world before, but never quite to this degree. And the fact that so many brands decided to play along really helped add to the excitement. It made for an "anything can happen" atmosphere.

I think they liked seeing brands behaving like people, not like big corporations. I think that made it really interesting to watch, creatively. We were talking about a product feature—many facets, in fact—and yet it felt like Honda was just having fun and not taking itself too seriously.

RPA is a restlessly creative shop, and we're always looking for mechanical advantages—where the size of the idea is much bigger than the budget. And where earned media can amplify the message. I think our industry has a deeper appreciation for this kind of work, versus the more traditional media models. We want to know how we're going to break through to consumers in an “opt-in optional” world, and I think projects like these make for interesting case studies. 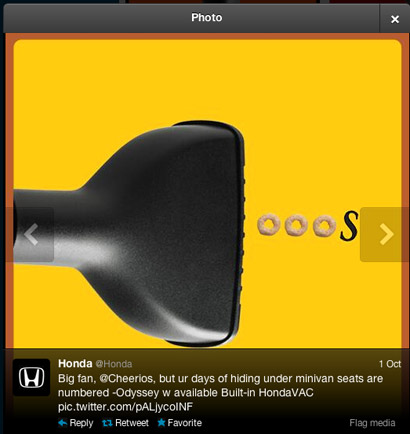 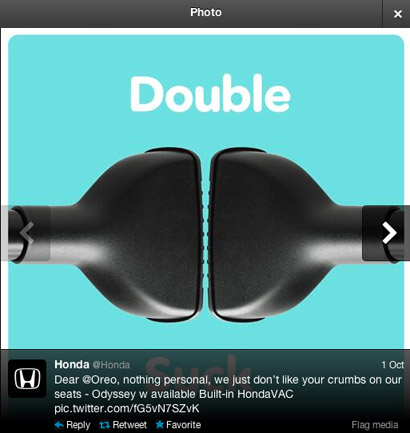 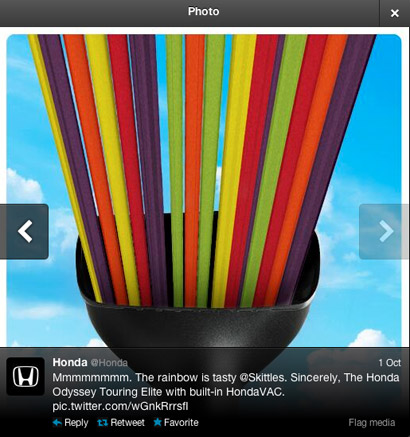 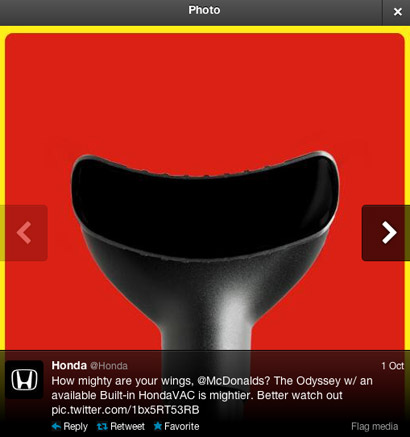 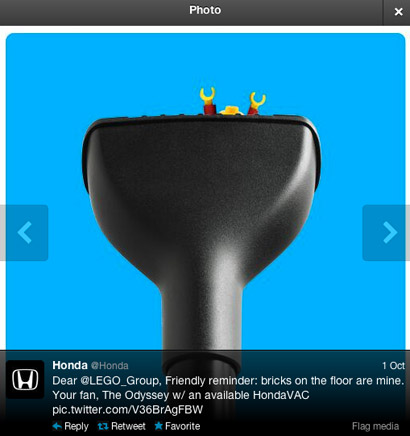