When Hurricane Maria tore through Puerto Rico last year, the devastation was nearly inconceivable, with millions of citizens without electricity or clean water, and billions of dollars of infrastructure damage. The hurricane had a profound effect on the island's rural residents, especially its LGBTQ community, who already faces struggles for acceptance outside of the big cities.

New York-based creative and One Club for Creativity Member Tyler Seecof was particularly moved after a recent trip to the recovering island, and wanted to help in a very personal way, and so he teamed up with illustrator Molly Egan and visual designer Greg Falconi to create special "orgullo" pins. That's the Spanish word for "pride", and all proceeds from the sale of these pins go to Waves Ahead, an organization that offers hurricane relief to marginalized people, including Puerto Rico’s LGBTQ community.

Tyler was more than happy to share the story of the pins with us here at The One Club.

What was the impetus behind wanting to do something for hurricane-devestatd LGBTQ Puerto Ricans?

While vacationing in Puerto Rico, my friends and I couldn't help but notice the remaining effects of Hurricane Maria. Naturally as tourists, we went out to the bars, which is where we saw our first sign that there is still struggle in the LGBTQIA+ community. The gay bars severely lacked patrons. After asking around, we heard that many people from the LGBTQIA+ community have moved out of Puerto Rico to escape Hurricane Maria.

This inspired us to do some research. We read that Circo, one of the more popular bars in the scene, was bombed while running on generators after the storm hit. This hinted to the fact that there is still some discrimination in Puerto Rico. Eventually, our research led us to Waves Ahead. After linking up with the organization, they confirmed that there is discrimination against our community, mainly in the rural areas where people are hurting the most from the storm.

How did you, Molly and Greg come together to create this pin?

Molly, Greg, and I all went to school together and have always admired each other's work. On our way home from Puerto Rico, Greg and I got to talking about how we could help. We began assessing our skillsets — he's a designer and I'm a writer — but we felt like there was still a missing piece. Molly, who is an incredible illustrator with an impressive following, was the first person who came to mind. Reaching out to her was a no-brainer. We both have some of her work hanging in our homes, so we shot over a quick text to gauge her interest. She said yes immediately! After that, we got straight to work discussing designs.

Greg and Molly, being the visual artists of the group, were inspired by the Puerto Rican flag. They designed the pin in the shape of a triangle with a star, then put it on a red and white striped backing for shipping. The rainbow stripes on the pin represent the LGBTQ+ community. The smiley face shows a happier tomorrow, and gives us some of that Molly Egan flare we admire so much! 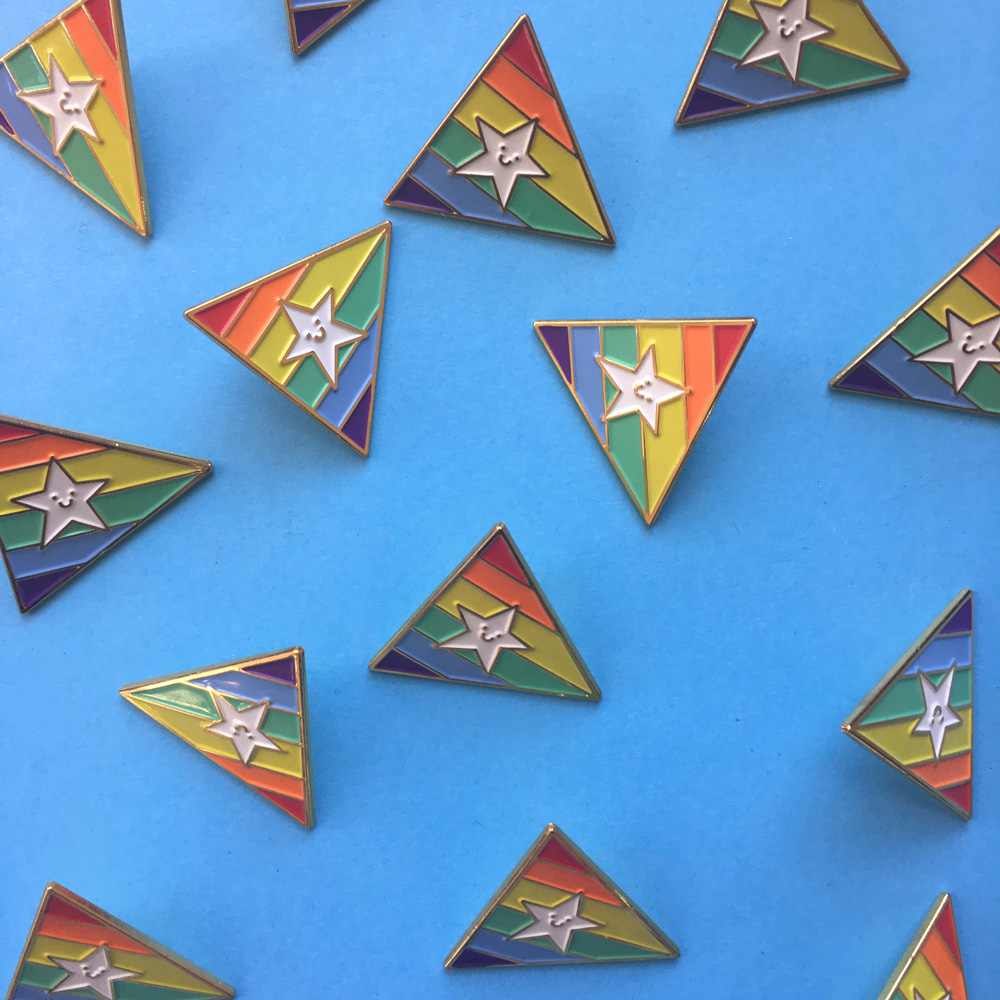 How has the early reception been?

We're ecstatic about the early reception! We've been telling people about it for weeks and many of them have definitely been interested. However, this initiative is surpassing our expectations. In only four days, we've sold over half of our stock and organically accumulated over a thousand retweets about our pin. We can't wait to keep it up.

" ...this initiative is surpassing our expectations. In only four days, we've sold over half of our stock and organically accumulated over a thousand retweets about our pin."

Tell us a bit more about Waves Ahead.

Waves Ahead is an incredible organization that provides goods and services to marginalized households, including LGBTQIA+ elderly. They didn't feel like these communities were being properly supported after Hurricane Maria, so they expanded their efforts with a project called Reconstruye Q (@ReconstruyeQ on Twitter) to provide hurricane relief. Now, they provide at-home therapy to help people struggling with PTSD, home renovations AND full rebuilds, as well as the other services and goods they provided before.

What’s next for the three of you? Do you have any other creative projects in mind to help?

There's always ideas circulating. Working together has been seamless and we're so humbled by the reception. We're discussing how to move forward with either this project, or new ones for additional organizations. In the meantime.

Greg is working fast and furious with a small team on a new political engagement app for the last couple of months. The platform aims to encourage millennials and first time voters to become civically engaged, with the ultimate goal of increasing voter turnout in the upcoming 2018 and 2020 elections.

Molly plans to continue using her time for projects that will help people and organizations in need. This isn't her first time using her art for good. In January 2017, Molly worked on The Little Lady Project. She asked for donation receipts and mailed 4"x4" original lady paintings to those who donated. The Project was able to raise $1,000 for the ACLU and Planned Parenthood.

As for me, I am continuing my work with Patients & Purpose, helping people living with several different conditions, ranging from cancer to multiple sclerosis. Additionally, I write a monthly article in Get Out! Magazine that analyzes different aspects of queer culture to help generate a better understanding of our community. 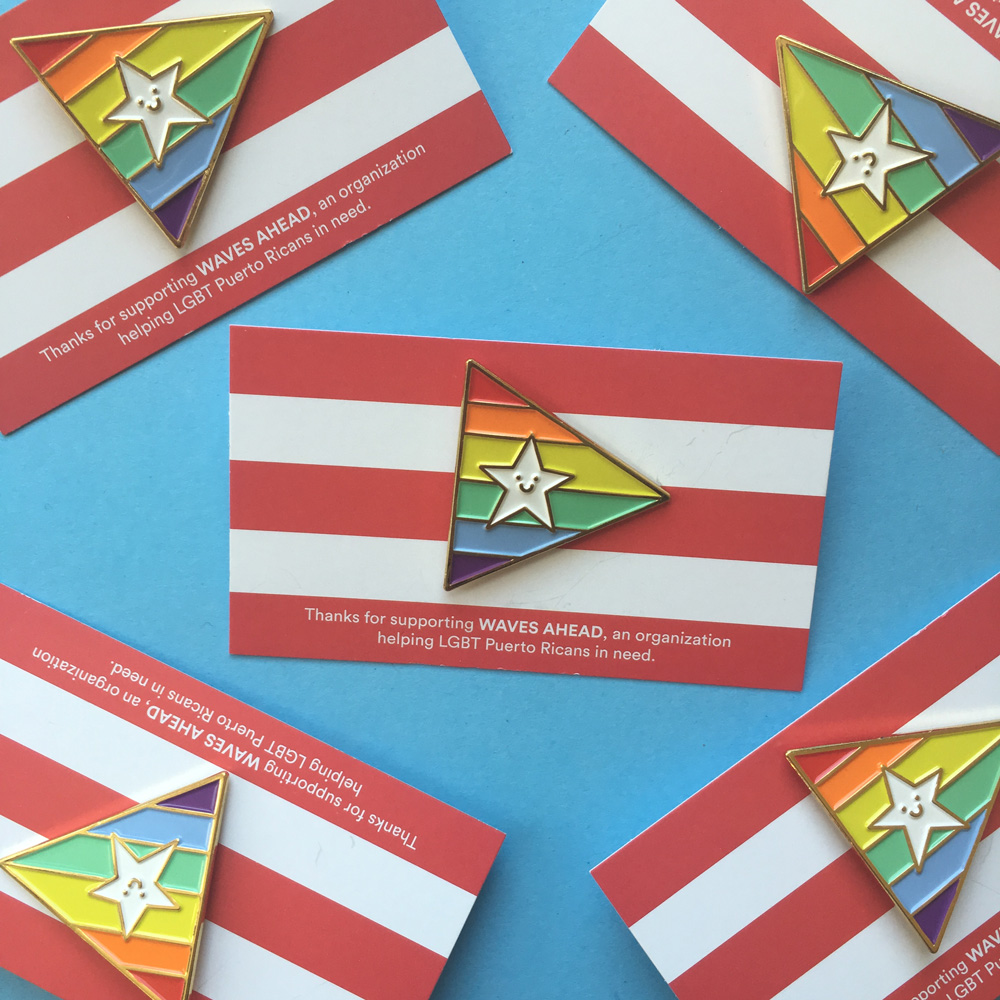