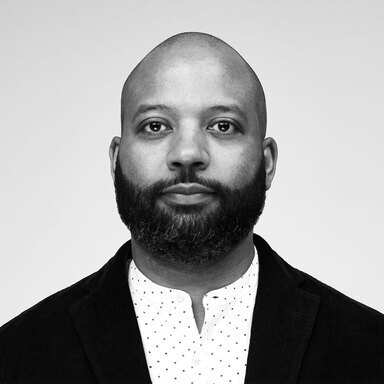 He sets a relentless standard of design and vision for the agency. Since 2010, Bobby and co-founder Jennifer Kinon have partnered with a wide range of clients such as Amazon, Apple, Dartmouth College, Girl Scouts of the USA, MTV, the National Basketball Association, and The Studio Museum in Harlem.

In 2019, Champions Design was named one of the 30 Most Important Companies in Design by Fast Company.

Bobby recently illustrated his first children’s book “Have I Ever Told You Black Lives Matter” (Tilbury House) and, in 2020, he was featured in Eye Magazine’s iconic 100th issue.

He has lectured about brand identity around the world, and been a special guest on Design Matters, Design Observer, and NPR’s Studio 360. Bobby served as a board member of AIGA/NY and currently sits on the Type Directors Club board of directors.

Bobby has won numerous international awards from the AIGA, Art Directors Club, Communication Arts, D&AD, SEGD, and the TDC, among others. He is a graduate of Virginia Commonwealth University and earned an MFA from the School of Visual Arts where he currently serves on the faculty.