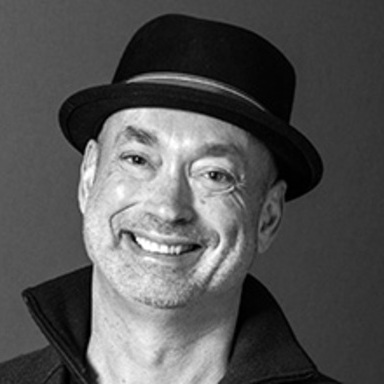 He started at Wieden+Kennedy in 1984. He was Dan Wieden’s first copywriter.

He worked primarily on a rather small account back then called Nike. Over the course of his near 20-year career on this account, he was kicked off it seven times, most often for saying exactly what he thought; after all, Riswold says, “I thought I was paid for my opinion and colorful use of the language, especially the word fuck.”

But it’s hard to stay mad at a bigmouth whose résumé reads like a history of contemporary advertising:

Charles Barkley declaring “I am not a role model”

“I Am Tiger Woods”

And for Microsoft: “Where do you want to go today?”

Back in the day, Newsweek named Riswold one of the 100 most influential people in American culture.

George magazine wrote, “Riswold’s campaigns may have created more American icons than anyone since Walt Disney. You would not, however, suspect it by looking at him…. Riswold looks more like the seven-year philosophy undergrad he once was at the University of Washington than one of the most powerful forces in American advertising.”

Riswold was diagnosed with leukemia in 2000 and retired from Wieden+Kennedy in 2005 to become, in his words, a “fake artist,” going from “a career of selling people things they don’t need to making things they don’t want.”

His artwork pokes fun at historical sacred cows such as Hitler, Mao, Stalin, Jesus and Kim Jong-il for reasons explained in an essay he wrote for Esquire titled “Hitler Saved My Life.” Riswold calls his work absurd realism. Others call it perverse whimsy. Still others call it “a black hole sucking the life out of everything.”

Riswold’s artwork is included in the permanent collection of numerous Pacific Northwest museums and respected private collections. He recently was commissioned to do a permanent installation for the University of Washington Philosophy Department called Philosophy Is Not Funny. All this attention to his “so-called art” confuses Riswold.

His latest show is called Art for Oncologists. Riswold’s oncologist, Dr. Brian Druker, says, “This is Jim’s first show where I don’t feel the need to apologize to anybody for saving his life.”