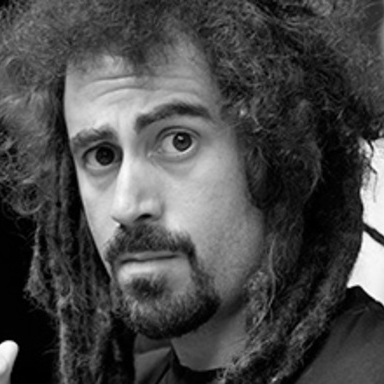 He's trying to make everything more awesome, stealing from the engines of innovation, technology and culture, to create innovative solutions for clients and partner agencies.

Previously he was EVP Chief Technology Strategist at McCann-Erickson New York, where he was tasked with helping to work out how brands, people and technology can play better together, developing consumer involved ideas for Nikon, Verizon and Kohl's.

Before that he spent 5 years being the Digital Ninja at groundbreaking communication strategy agency Naked Communications, in London, Sydney and New York, working with brands like Google, Sony, and Coca-Cola, helping some of them win awards.

After getting a MA in English at Lady Margaret Hall, Oxford, Faris spent some time as a management consultant, helping blue chips and start-ups navigate the emerging digital landscape, building a number of digital businesses and then writing for Maxim magazine before landing in communications planning.

Faris regularly writes about brands, media, communications, technology and that for a number of publications including the Fast Company, Contagious Magazine, and Forbes. He writes a blog called Talent Imitates, Genius Steals, which Campaign named one of the top ten advertising blogs in the UK and was nominated as one of the ten 'Best blogs to follow' by Mashable.

He was awarded the President's Prize for his thesis on the future of brands from the IPA in the UK. He has been lucky enough to be invited to talk about this sort of thing at conferences all over the world, from Romania to Brazil, was invited to speak at MIT's Future of Entertainment conference, has lectured at the University of Westminster and the University of Southern California, and is involved with the Boulder Digital Works program.

Faris has served on the jury for the Content and Contact category at the Clio Awards, the digital jury for the Campaign BIG Awards and is the president of the jury for the NEW Category at London international Awards for the second year running. He has written chapters about social media for two Age of Conversation books, the proceeds of which went to Variety, helped organise Twestival, a global twitter meet up to raise money for charities.

He was named a Campaign "Face to Watch" in January 2008, a week after he had left the country to crack the states, where no one reads Campaign.