Sunday Dinner with Nate The Director

Popular Instagram account Overheard New York recently posted “8 Gifts of Chanukah: NY Edition” and one of the eight gifts, “A full week without hearing the word “podcast”,” which says a lot about the rate that podcasts are consumed and popping up these days. But hey, there are a lot of really great podcasts out there to listen to and enjoy. One of them being Frequency by Spotify Studios, which is “Spotify’s home for the future of Black expression.”

Frequency started a Sunday Dinner Series to celebrate Black music and artists from different states across the country. The third and latest video episode that dropped in the series is directed by Young Guns 19 Winner, Director, and Houston native, Nate Edwards. We needed to know more about Nate the Director’s Frequency Sunday Dinner: Texas episode, so we talked to him and got all the details and insight you need to know.

This Spotify video/podcast series is aimed at highlighting Black artists, music, creativity, and their roots, so what were you hoping to capture when directing the Houston Sunday Dinner? 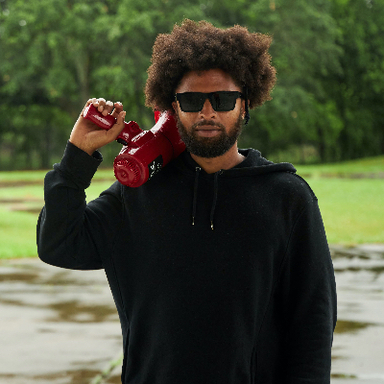 I was hoping to capture authenticity - I wanted the Houston Sunday Dinner to be a genuine conversation between these artists and capture the essence of each persons character. I had some guidelines with previous episodes having already been shot, I knew it was going to be a dinner conversation aspect and hero shot portion, but other than those guidelines I had complete control and freedom to direct this episode how I wanted.

How did you get involved in directing this podcast episode?

I got involved through my agency, Invisible. They are an amazing agency and support system. Spotify reached out to them because they were familiar with previous works of mine. I pitched my idea, and luckily the Spotify team was a able to see the vision. I’m not sure how many people were competing against me for the project. Frequency made a running list of who to include at dinner- I gave input where I thought was needed, but they have such a great team that strategically picks artist who will give a well rounded perspective of the music scene.

"I pitched my idea, and luckily the Spotify team was a able to see the vision."

Texas music is the future. If we’re eating at my house I will be playing Luther Vandross or Piero Piccioni.

"Texas music is the future. If we’re eating at my house I will be playing Luther Vandross or Piero Piccioni."

What was going through your mind as you were filming this episode?

The dinner was a normal dinner length - so I filmed for about an hour and a half. We didn't have to stage too many things at the dinner so it was able to run smooth without being drawn out. It was a difficult project. Shoutout to the editing team and the team over at Spotify for having the experience from the first two episodes to help comb through and point out story beats quickly. While filming I was thinking, “wow I can’t believe all these amazing artists are at one table having this meaningful conversation.” So I was really soaking the moment in. I was also listening for key narrative beats.

What does Houston mean to you? How has the Houston Ripple Effect contributed to your success as an artist and director?

Houston is home. Houston is my safe space. The city has come so far in the past ten years, it has felt like we are growing together - so the ripple effect has made it that much easier for me to not only call Houston my home and base, but also be able to make a living from projects right here at home - instead of having to travel so much for work. The teams here are ready to take on the bigger projects now as well - which really contributes to my success because I am able to grow and build with my teams that mean so much to me.

One year post winning Young Guns 19. How are things going for you?

Things are going beautifully! Right now I am currently in pre pro for my directorial debut, of "She Taught Love" written by Darrell Britt-Gibson, starring Darrell Britt-Gibson, Kirby Howell-Baptiste, and Taissa Farmiga. Also working on an O'Jays documentary with long time friend Lemicah Levert, and Lena Waithe's Hillman Grad. Other than that, organizing for an even bigger 2023 and staying ready.

Previous Young Guns Winners and One Club for Creativity Members get featured here on the One Club website and across our social media channels. Have a new project you'd love to share? An upcoming exhibition and you'd like us to help spread the word? We always love to know what our One Club Members have been up to, so don’t forget to send us your cool work!