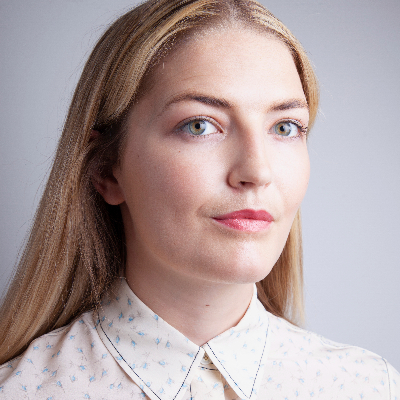 I originally heard about Young Guns when Dana Tanamachi spoke at my university in Montana, and shared that she’d won. I was dazzled by her work— it was the first time I realized you could have a design career focused on typography, and I wanted to do similar work.

After that, I began following the Young Guns award, and many of the designers I admire most have received it. It became a goal for me— I wanted to do work at that caliber and set about making that happen.

Since you’ve entered a few times before, what did you do differently this time around that may have pushed you into the winners’ circle?

My first entries were more an exercise in putting together a cohesive portfolio, but I didn’t feel ready. This year and last year, I felt pretty good about my work. One of the most helpful things was asking a few people I trusted to review my portfolio.

My entry was almost the same as my entry last year, because my 2021 independent projects had not been finished or released. So, I focused on making the work I had look its best, and I made my writing for each project clear. I switched out one project for an earlier one to show more variety. With the space and time to review my portfolio over the past year, I was able to see my growth and construct my portfolio with a clear point of view.

I approached entering Young Guns as a way to show my typographic talent, as well as my range. I looked at my work through a typographic lens and chose the projects that most reflected my type-driven approach, whether through branding or editorial. I was sure to include the wide range of disciplines I’ve worked on, from lettering to packaging design, to photo art direction. I had the hardest time editing down my personal work, as I have done several typographic personal projects as a vehicle to push my work and process.

It had been a goal of mine for years, so I was overjoyed to get the news. I may or may not have screamed in my apartment and scared my cat. I told my friends and family individually over a series of phone calls, and it was really sweet to hear their reactions. I’m excited to celebrate when I see people in person over the next couple of months.

My favorite work is my editorial design work. I submitted designs I have created for The New York Times Magazine and Harper’s Bazaar. It feels like such a pure form of graphic design— creating a design that responds to and invokes a story.

Typography can be so fun and unrestrained, and I love that it’s the most ephemeral work I’ve created. It’s also the kind of work I was most interested in as a young designer working at my university’s student newspaper, and designing a monthly arts publication in Montana after graduating, so I feel lucky to do it in a larger sense now.

I’d describe my work as type-driven and refined– I love to make everything sharp. I work intuitively, editing over time. Sitting down to work is what makes me come up with ideas, rather than coming up with ideas before I work. In that way, everything I create feels very me from the start and I just keep refining from there.

"I’d describe my work as type-driven and refined– I love to make everything sharp."

I feel appreciative of so many people that took the time to mentor me, speak with me, and support me in my career. Meta Newhouse at Montana State University for first introducing me to the world of typography and still being my biggest champion. Ashley Jones, Lisa Hedge, Amy Fraser at OKREAL, Noemie Le Coz, Lotta Nieminen — some of whom I’ve been lucky to work with and learn from directly, and all of whom have made time to show me how they’ve gotten to where they are by candidly sharing their career experiences. And the incredibly supportive group of humans at Google Creative Lab, with whom I was fortunate to spend most of the pandemic.

Gail Bichler, Matt Willey, and Ben Grandgenett were inspiring and encouraging as I created my work at The New York Times Magazine. I still subscribe to the Sunday paper to see the team’s impressive work.

In particular I am thankful for two people from my time at Partners & Spade (which is now called Mythology): Elizabeth Dilk, who graciously took a chance on me and brought me into work just a few days after I moved to New York from Montana with hardly a portfolio, and mentored me for three years; and Creative Director Anthony Sperduti, who pushed me forward and believed in my capability even though I couldn’t believe it myself.

The pandemic was tough for me creatively, and I’ve spent most of this year trying to reignite my love of what I do. I’m excited to continue that in 2022– work fully independently, be selective of the work I do, and work on releasing personal projects and typefaces.

Personally, I want to spend time outside and away from my screen, reunite with friends and family I haven’t seen since the beginning of the pandemic, and snowboard!

I want to do a bit of everything! I have a list: a typeface for film titles, a book cover, a large scale typographic mural in a city, lettering for an album cover, and a global campaign.

Any thoughts on how you are feeling about winning YG19?

I feel so honored — a huge thank you to the judges for choosing me for YG19. And unending gratitude to my friends and family for their support.