Once Upon A Time, Dan Wieden

An annotated elegy courtesy of the icon’s first copywriting hire

The advertising community lost another giant recently, as Dan Wieden, the iconic co-founder of Wieden+Kennedy and the scribe behind one of the most famous taglines in history, passed away on September 30 at the age of 77. Dan’s accomplishments are far too many to mention, but in our neck of the woods, he’s one of the few industry legends to be inducted into both our Creative Hall of Fame and ADC Hall of Fame.

And so, with nearly a year separating the passings of Dan and his equally celebrated partner-in-crime David Kennedy, we are once again buoyed by the musings of W+K’s first-ever copywriter, 2013 Hall of Fame laureate Jim Riswold. 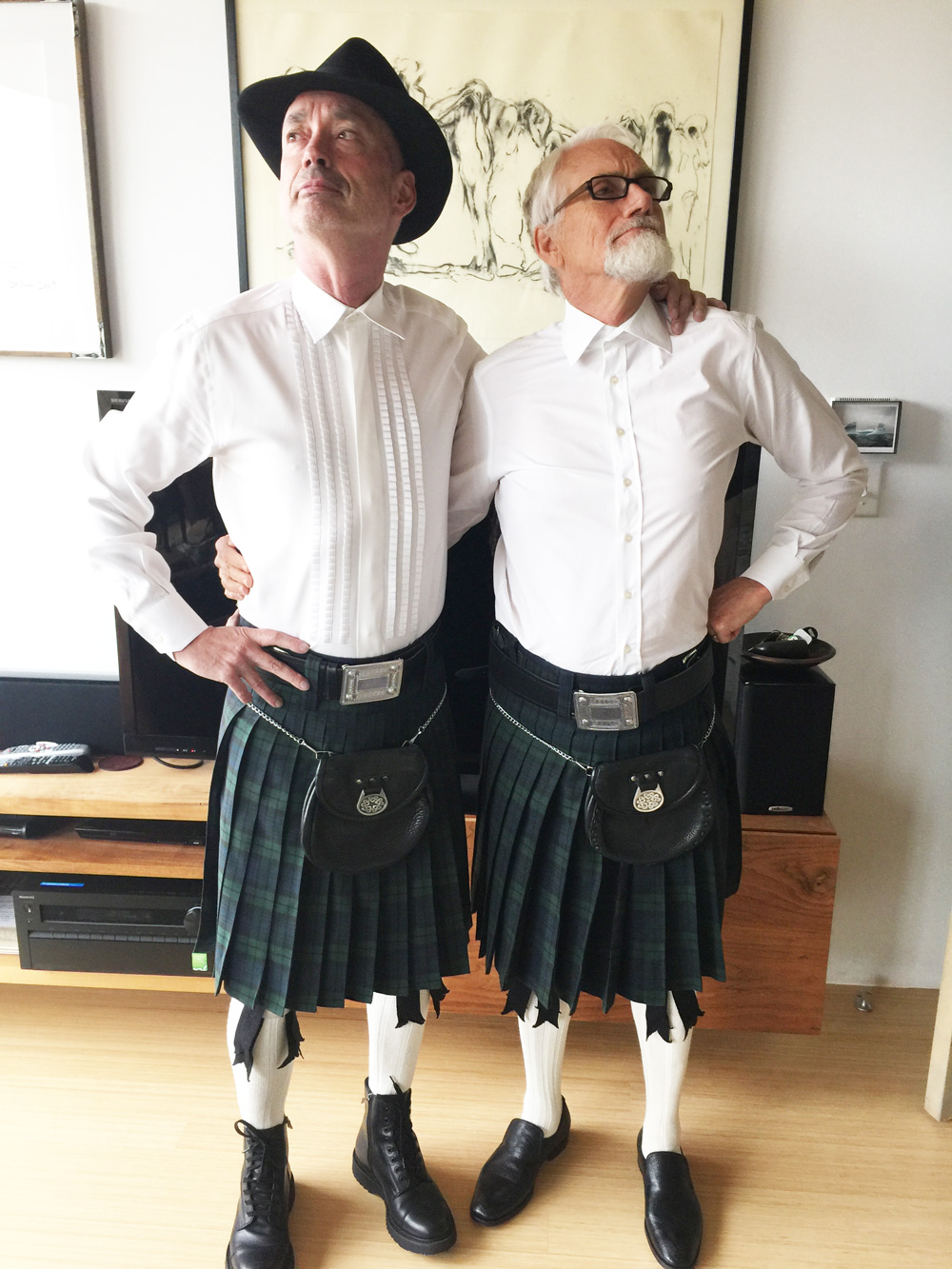 Paul Riswold brought me into this world. Dan Wieden gave me my world.

Both are now gone.

I was the first copywriter Dan Wieden ever hired.

What an honor, epitaph-worthy even. Thank God Dan did not know to hire properly in 1984.

Dan taught me how to write.1 He was fond of telling a story where one time, about three months into the job, he found me under my desk, “stone sober,” as he put it, telling him I wanted to quit and go back home to Seattle because I missed my sisters. Dan told me to get out from under my desk and start writing because “writing solves most everything.” I listened, Dan was always worth listening to, and I guess things turned out okay as far as writing ads go, no offense to my sisters.

But. Words fail me right now. Utterly. Completely. Sorry, Dan, I have no fucking clue what to write. I want to hide under a desk again. Like forever.

Of course, there is a world of interesting and amazing facts about Dan I can throw out there. Born March 6, 1945, same day some guy in Iowa invents the trampoline.2 On March 6, 1475, 470 years before Dan’s birth, Michelangelo is born. Michelangelo said, “The greater danger for most of us is not setting our aim too high and falling short; but in setting our aim too low and achieving our mark.” Dan said, “You’re not useful to me until you’ve made three momentous mistakes.” Make glorious mistakes. Got it, gentlemen.

“You’re not useful to me until you’ve made three momentous mistakes.”

Dan is a Pisces. The Pisces sign is the fish of the zodiac. Pisces are sensitive, intuitive, compassionate, empathetic, and tend to go emotionally overboard.3 George Washington and John Wayne Gacy are fellow Pisces. Dan once got a fishing hook stuck in his nose and had to go to the emergency room to have it removed.

Dan has a younger brother, Ken. As noted above, Dan and BFD serial killer John Wayne Gacy are Pisces, and according to Ken, Dan tried to murder him three times when they were young. Time #1: When Ken was two years old, Dan threw him out of his crib. Time #2: Dan tried to walk Ken across Neskowin Creek, knowing full well the water was well over Ken’s head. Time #3: Dan hit Ken over the head with a hammer while the two were building a boat out of 2x4s.

Sticking to murder, Dan plagiarized “Just do it” from convicted murderer Gary Gilmore. Gilmore’s final words before his execution were, “Let’s do it.”

Dan liked Nietzsche. Both men had outstanding facial hair. Both men were crazy smart. Both men embraced chaos. Nietzsche said, “You must have chaos within you to give birth to a dancing star.” Dan said, “Chaos is the only thing that honestly wants you to grow. The only friend who really helps you be creative.” Nietzsche was a much better dancer than Dan, but Dan could really cream him at advertising.

“Chaos is the only thing that honestly wants you to grow. The only friend who really helps you be creative.”

Dan once had a parrot in his office. The parrot had a tendency to swear a lot. Dan preferred to be the only one, regardless of species, who swore a lot in his office.4 The parrot lasted only one day and, rumor has it, may have ended up as the lunch special at the W+K Counter.5

Facts, even odd ones, aren’t Dan.

I suppose I could rehash a song I wrote about him for yet another big, fat-ass, lifetime achievement advertising award he got (along with Barry Manilow) and couldn’t have cared less about, aside from meeting Barry Manilow.

Daniel Wieden was a man
Yes, a big ad man
Told America just do it
While we just sat around watching TV

Daniel Wieden was a man
Yes, a big ad man
Reaching into every wallet
With amazing advertising alchemy

What a Wieden, what a wonder
What a luncheon-worthy ad man was he

Daniel Wieden was a man
Yes, a big ad man
Never shaving, always swimming
And refusing every form of poultry

Dan and Kennedy made a few ads
The ad world deemed breakthrough
Unfortunately, none of these ads
Were for Microsoft or Subaru

Daniel Wieden was a man
Yes, a big ad man
He’s a titan of the industry
Just like Barry Manilow, you see

What a Wieden, what a wonder
What a capitalist hippie was he

Bingo! That corny little ditty reminded me what Dan is and always will be—a wonder.

Mr. Webster’s book of words tells us that a wonder is “a feeling of surprise mingled with admiration, caused by something beautiful, unexpected, unfamiliar, or inexplicable.”

Inexplicable Dan. Dan himself couldn’t explain his agency. When a big, fancy magazine with glossy pages and four-color separations asked Dan about the success of W+K, he answered, “I do not understand how this happened. I really truly do not.”

Unexpected Dan. Dan swore by the slime mold theory. In a slime mold, a bunch of divergent cells come together and create something unexpected—in this case, the misfits who have, are, and will come together to make up W+K.

Wondering Dan. Dan was curious. You cannot be creative unless you’re curious. Dan liked to read; however, he would not read used books because he believed the former reader had taken the book’s soul. (Sure, Dan, if you say so.) Dan always seemed to be in a constant state of wonder, and he never smoked marijuana. His greatest joy seemed to be when, seemingly out of nowhere, employees found their voice and rejuvenated his beloved slime mold. Dan never cared how something happened; he just cared that something happened. Sounds like wonder to me.

Unfamiliar Dan. Dan didn’t do anything remotely familiar. Dan spent most of his 77 years as a vegetarian but returned to the Land of Carnivores a few years ago. Most vegetarians who throw in the towel usually celebrate with a big, juicy steak or by eating their weight in bacon. Not Dan. Dan’s first meat meal after quitting plants: a hot dog.6

It’s no secret our industry, country, and world could use some more wonder. Wonder makes Life joyous.

Speaking of Life, Dan went peacefully in his wife Priscilla’s arms, surrounded by his cool-as-fuck family. This "peacefully" thing is somewhat ironic, given the man LIVED AND WORKED OUT LOUD, but it’s deserved. Dan didn’t do anything peaceful. Hell, he didn’t even sleep peaceful—he could snore paint off a wall. Alzheimer’s is a horrible disease, especially for a man who changed the world with his brain. He’s in a better place, reunited with Kennedy and creating the greatest agency ever in the hereafter, W+K Afterlife. I can only pray Dan and Dave are stupid enough to hire me again when I get there, if I ever get around to dying.

Dan Wieden is and always will be a wonderful, living, once-upon-a-time fairytale.

Thank you, Dan, for letting me in on your magic.

1 As a philosophy major, I could write things with lots of footnotes called Hegel’s Theory of Punishment, Nietzsche Contra Hobbes, and some ditties about Spinoza, Kierkegaard, et al. Got good grades. Not sure they could make sense to normal human beings, let alone help sell shoes.
2 George Nissan. Coincidence?
3 You knew you were in trouble when Dan yelled at you. You knew he was yelling at you because his voice would jump a few octaves and he would sound like the second-string Hanna-Barbara cartoon character Tennessee Tuxedo (voiced by Get Smart’s Don Adams). Lots of swearing was involved, by Dan. Sometimes it was hard not to laugh. Sometimes.
4 Once upon a fucking time, a group of devout non-swearers asked Dan if he could tone down his and the agency’s language. Dan politely told them, “Fuck off.”
5 Tasted like chicken.
6 Speaking of carnivorousness, Dan wanted to die by being eaten by a wild animal. He didn’t get his wish.
7 Rest assured, Dan is still working on my humility from the other side. He still has work to do.

Life was good with Dan Wieden: 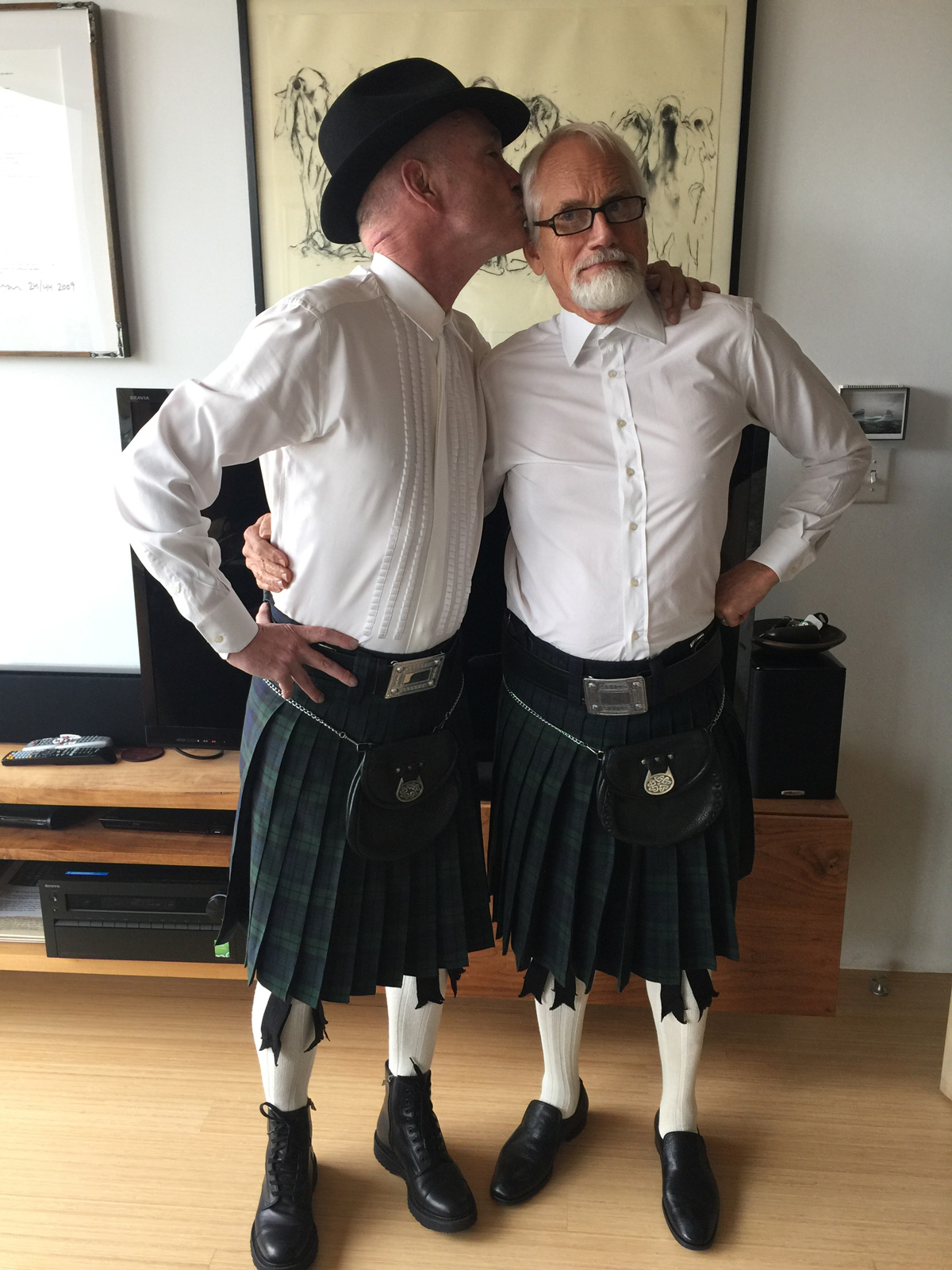 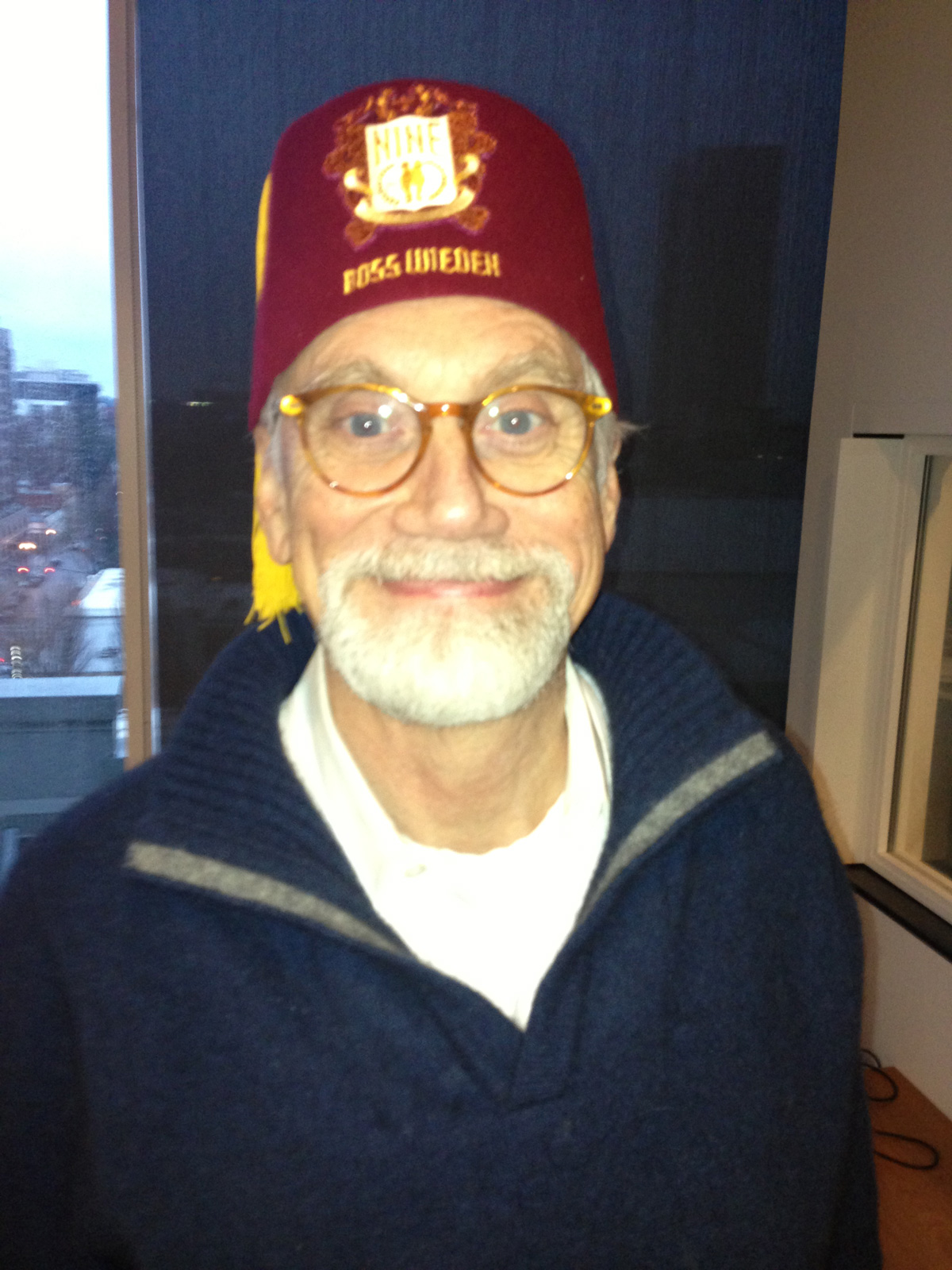 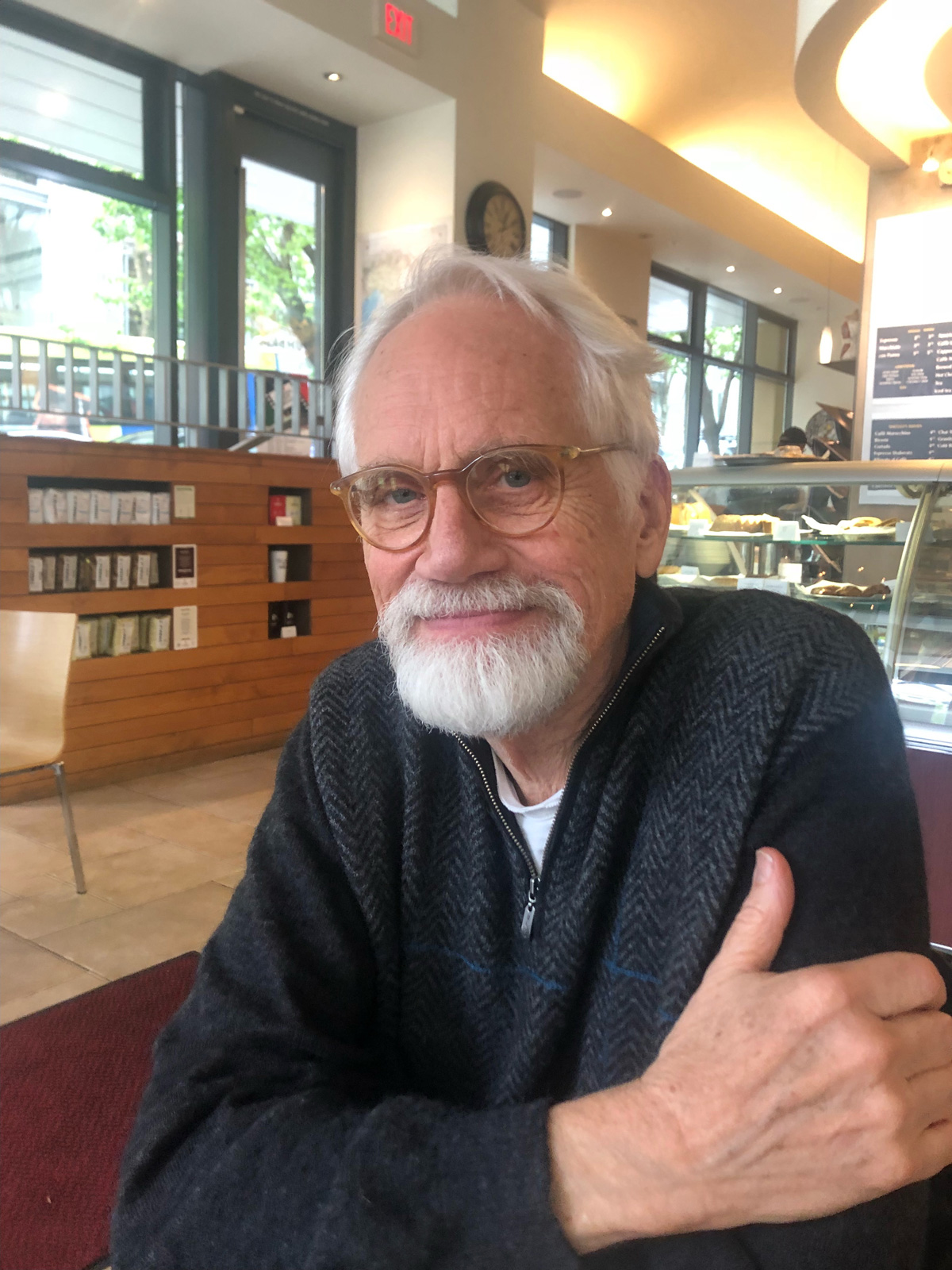 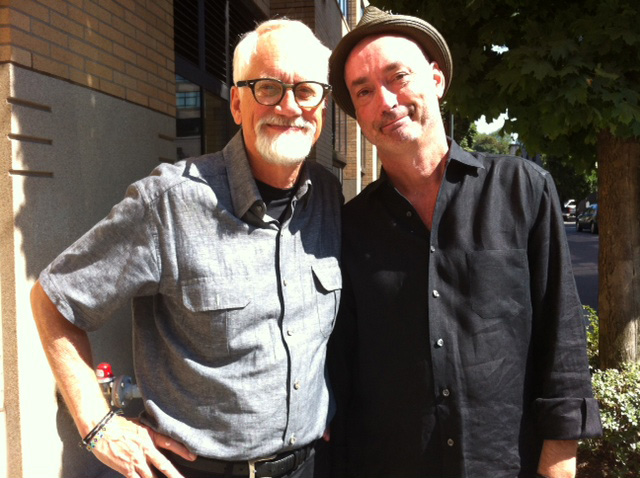 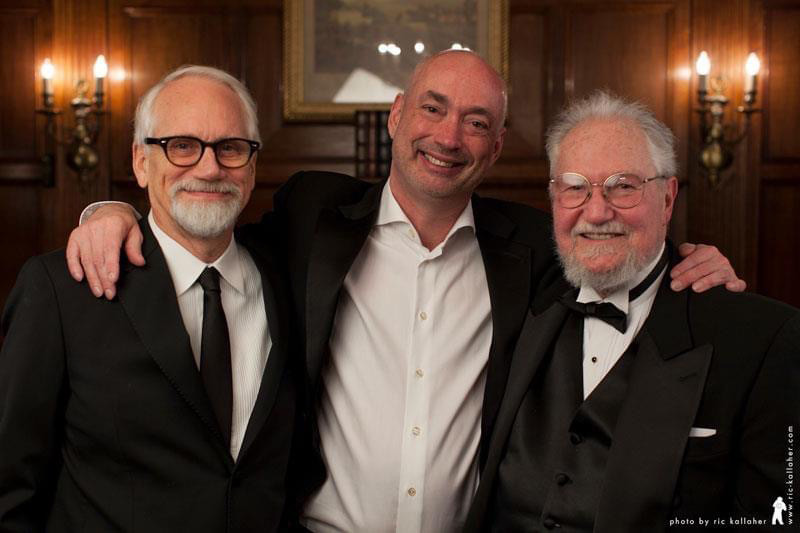 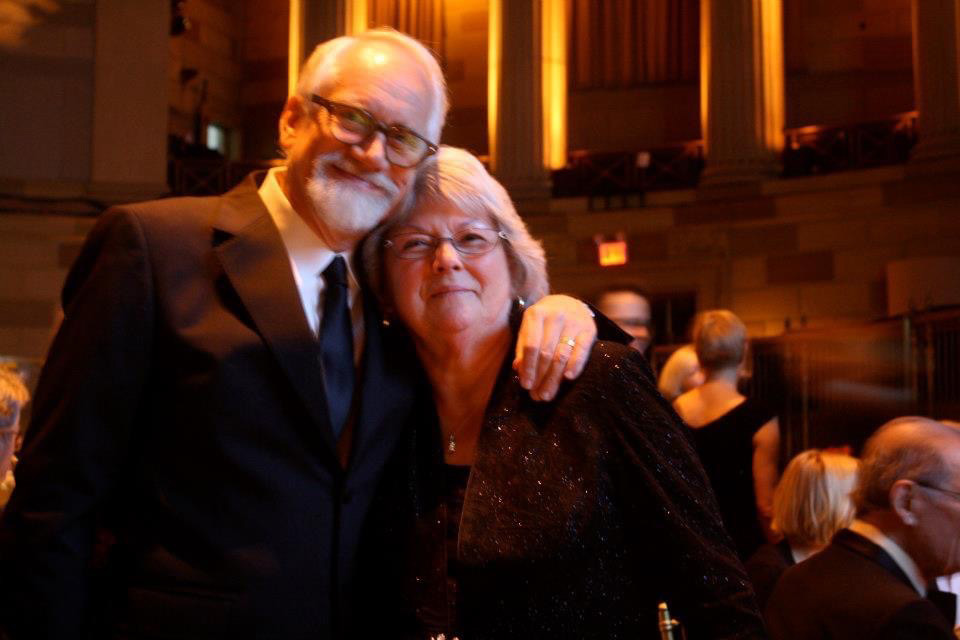